Big storylines pulsing through social media for the week of February 15: Groms stand tall in the Hawaiian swell, Kelly Slater (USA) gets inspired by the documentary Blackfish and Australia's Gold Coast faces down a fast-approaching cyclone.

You may have noticed a strange design on Kelly Slater's board during Round 1 of the Billabong Pipe Masters. A similar board with the same design showed up again at the Volcom Pipe Pro. 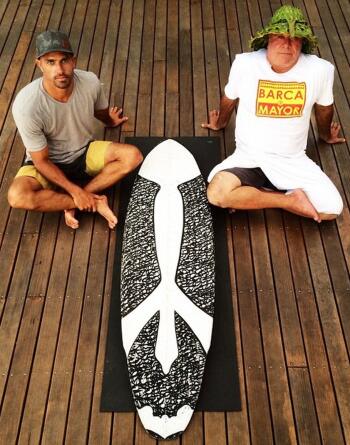 Kelly Slater and Kevin Ancell with one of their Blackfish-inspired boards. - WSL

The boards are products of a collaboration between the 11-time World Champ and shaper Kevin Ancell. The growing quiver is going wide as #thepod. After the Pow! Wow! Hawaii exhibit featured the boards, Slater had this to say:

After watching the movie #Blackfish, I was so moved and perturbed with the wild captures and captive breeding of the Orcas that I felt compelled to paint my boards to mimic their markings. Kevin and I had been thinking about something we could do together for a couple of years and we happened to be on a trip together just as the idea occurred... They say you have to choose your battles wisely in life and this actually becomes a complex battle which dives heavily into money, personal emotions and belief, animal regulations, etc. I'm pretty clear where I stand on it after hearing two sides...

Championship Tour surfers are getting some pretty amazing practice as Cyclone Marcia stirs up the sea at the Gold Coast. Coolangatta's Snapper Rocks is the site for CT Stop No. 1, the men's Quiksilver Pro and women's Roxy Pro Gold Coast, and the early birds are definitely getting the worms. Thursday, February 19, the Bureau of Meteorology was reporting "a category 4 tropical storm with winds near the centre are now 195 km/h, with wind gusts to 270 km/h." Oh to be young again... and signed by a major sponsor. The Rip Curl USA grom team traveled to the 7-mile miracle on Oahu this week as part of the company's #SurfingIsEverything campaign. The young surfers, ages 11-18, were met by a solid swell and stepped up accordingly. Check out Surfline's footage of the trip.