As a location, Bells Beach isn't exactly idyllic. It's cold and regularly crowded.

But Victoria, Australia's famous break presents its own form of grandeur: Visually stunning, Bells is reliable and accessible -- especially to thousands of surfers who live in Melbourne, Australia's second-largest city, 90 minutes to the northeast of the famous spot.

The closest town is Torquay, also known as the Gateway to the Great Ocean Road -- a paved paradise along 151 miles (242 km) of coastline. For eager surfers hitting this renowned stretch of coast, Bells Beach is stop No. 1. Simply put: Pull into the car park, run down the stairs and paddle out from the beach. The Bells Beach breakdown, from Rincon to Winkipop. - WSL

Rincon can be a high-performance wave and impressive aerial surfing has been on display there in recent years. Once things move into the Bells Bowl though, it becomes hard to surf above the lip. But modern progressive surfing isn't only about airs; rail surfing might be what the conditions demand. (This may come in handy for event wildcard Mason Ho.)

Joel Parkinson, who has won at Bells three times, knows the break as well as anyone. He first travelled to Bells at age 14 and he's tasted victory there on multiple occasions.

To compete successfully at Bells you have to be ready for everything. - Anderson

"What I've loved to see is how guys have evolved and really pushed their rail game in the Bells Bowl over the last few years, drawing different lines," he said. "It's really brought Bells to life."

Two-time Bells victor Simon Anderson agrees: "Bells is a full power-carve venue, that's what makes it unique. You might say it's similar to Jeffreys Bay in South Africa, but J-Bay is more down the line. The faces at Bells are bigger and that requires a lot of strength to hold your carves off the bottom and off the top. Parko, Kelly, Jordy Smith...those are the types of guys who do well at Bells...and Adriano de Souza, who won it a couple years ago, in 2013, because he could match it with that sort of surfing."

Anderson is one of many surfers who have won at Bells multiple times. The big, powerful natural-footer from Narrabeen in Sydney, Australia first won Bells in 1977. He won it again in historic fashion in 1981, riding a board with a three-fin thruster configuration, a design he pioneered. Performing first in 12-foot plus conditions and then in small 1-to-2 foot Rincon, Anderson's triumph that year is among the most momentous in professional surfing.

Parko in Action
Parkinson brought his signature power-carves to Bells during Round 3 at the 2014 Rip Curl Pro.

"That big day in '81 was a magic Bells day," Anderson said. "Back in that time, apart from asking a local what was going to happen the next day, there was no swell-forecasting you could rely on. So everyone was caught by surprise, simply by how big it was and how clean it was.

"It was an epic day in world professional surfing and to be a part of it and to be able to introduce a design innovation to the world was very exciting."

Bells Beach has also seen innovation in terms of the contest technicalities. It was the first Championship Tour event to adopt the points-for-maneuvers approach to scoring, which was conceptualized by George Downing and first used at the 1972 Hang Ten event in Hawaii.

With variable conditions and a range of surf spots available, going mobile during the Bells contest is highly likely. Numerous rounds and Finals have been held at Johanna, a break that's two hours away by car and a south-facing swell magnet. Other potential locations include Woolamai Beach on Phillip Island, situated two hours east, and less likely but still possible, at nearby 13th Beach. All three locations are typically peaky, beachbreak set-ups that lend themselves to the full range of judging criteria. However, the closest alternative to Bells is Winkipop, located a few hundred meters east. 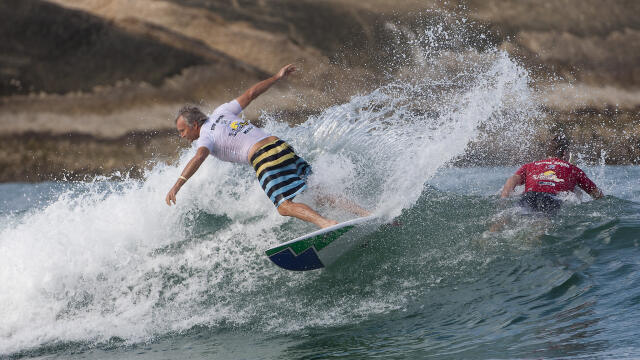 Anderson still knows how to put a thruster to work. - WSL / Kelly Cestari

Like Bells, Winki is a righthand reef break, but it requires a completely different approach. The rock shelf there is much more defined which makes it a very fast, down-the-line wave and with more tube opportunities. The best piece of advice for surfing Winki? Keep most of your moves in the top half the wave and keep the pedal to the metal.

The well-prepared will be paddling out this Easter on whips that are an inch or two longer than their normal shortboards. Anderson recommends everything from a small-wave groveler for Rincon to a board that could handle 3-to-4 foot up to 10-to-12 foot Bowl. When the swell is pulsing out of the southwest, Bells is a demanding venue.

"You need boards that hold a long line and still allow you to be dynamic out of the top of the wave," said Anderson. "It's hard to get the event to run in good, consistent surf for the entire duration. To compete successfully at Bells you have to be ready for everything."

The Rip Curl Pro Bells Beach is among the first three events of each Championship Tour season. As one of the big events at the start of the year, it's a critical step in the Title race, encouraging -- or crushing -- surfers' momentum. But the nature of the break makes doing well there a tough assignment.

It's a tough wave to just turn up and surf it well. - Parko

"It can be the best experience of your life as far as heats go," Anderson said. "Or you can end up in a change-of-the-tide heat and without being able to strike a blow -- you can be out of the event. It's a heartbreaker of an event and you need a bit of luck to have success."

Said Parkinson, "It's just one of those waves you have to put a lot of hours into to get your head around. It's a tough wave to just turn up and surf it well. Even though it looks really lined up, it's still a hard wave to surf well and put your turns in the right place and make it all flow."