The next crop of Brazilian talent was on full display on opening day of competition at the Rip Curl Pro Junior Series Mar del Plata in Argentina. Punchy sets with waves ranging from 3-to-4 feet (1 meter) were on hand at Playa Biologia as Rounds 1 and 2 were completed.

"Because of the climate here, conditions changed a lot throughout the day, but I did good enough to get past my heats," said Silva, who is currently No. 1 on the South America Junior rankings after his victory at the Rip Curl Pro Junior in San Bartolo, Peru. "Everybody competing here is really good, so I needed to use a bit of strategy to win my heats." 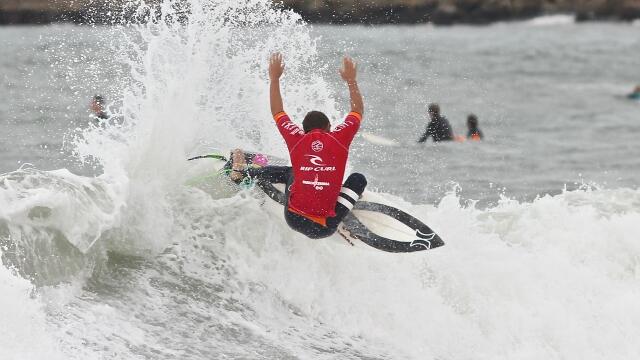 Alonso Correa was one of two non-Brazilians to make Round 3. - WSL

Breaking up the string of Brazilian heat wins was Alonso Correa (PER), who took apart his opponents by scoring a 15.25 (out of a possible 20 points) for a solid win in Round 2.

"I had a great day of competition today and I'm stoked to be back in Mar del Plata," said Correa. "In my first heat, I got an 8.00 and a 7.25 on my two best waves. In Round 2, the waves weren't as good as they were in the morning, but I also did enough to get past. I'm going to compete in the Qualifying Series (QS) event here as well, so I'm really excited about the next few days."

The only other non-Brazilian to make it to Round 3 was Nic Hdez (USA). Victor Dos Santos (BRA) earned the highest heat total of the day, a 17.40.

WSL hosts Peter Mel and Paul Evans look back at some of the epic action on Day 5 of the QS10,000 ABANCA Galicia Classic Surf Pro.