Highlights Day 4
2:29
The final European Junior event of 2015 sees huge upsets on Day 4 with both the men and women's ranking leaders eliminated at San Juan.

The Teguise 2015 Franito Pro Junior resumed in wind-affected, three-to-four foot waves and witnessed an exciting day of action mixing huge scores and major upsets on the eve of the final European Junior day of competition for 2015.

Teresa Bonvalot (PRT) 15, stepped up to the plate in her important Quarterfinal matchup against current No. 3 Ariane Ochoa (EUK) 17. Both surfers delivered a series of exciting exchanges, with Ochoa leading the show up until Bonvalot found a gem on the five-minute mark. 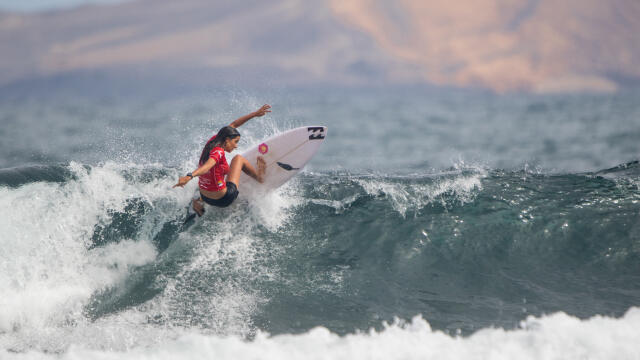 "The waves changed a lot from the first heat to ours," Bonvalot stated. "It was cleaner and started to really pump. It's an incredible place to compete, probably my favorite wave on the junior tour. I'm super happy to make the Semis and now I'll go focus for tomorrow."

When it most mattered, Bonvalot found the resources to nail two huge maneuvers on a set wave, and fell on her final closeout turn, but the damage was done. With a near-perfect 9.60 the Portuguese belted her ticket for the semis where she'll face good friend and current roommate Holly Wawn (AUS), age 17.

"This was a crucial heat for sure, but the event is not over yet," Bonvalot added. "I want more and I'll do my best to win this event. Holly is a good friend of mine and she surfs well so that'll be a fun heat. We both want to win bad so we won't be two friends out there, just two competitors trying to do their best."

Nadia Erostarbe (EUK) 15, upset current rankings leader Juliette Brice (FRA) 16, with a buzzer-beater in the last women's Quarterfinal. Brice, who only needed to advance through one more heat to secure her maiden European Junior title, was denied the regional crown when Erostarbe found her winning ride in the dying seconds of the heat. "I can't believe I actually won that heat," Erostarbe said. "I spent the whole time in second and finally got the score in the last seconds so it feels amazing to win that Quarterfinal. I was already stoked to be able to surf that heat against the rankings leader, win or lose, but it's definitely a surprise that I won."

Aldric God (FRA) 18, secured one of the day's biggest performances with a solid 17.20 heat win including an excellent 9.33 for a combination of multiple powerful backside top turns on a long and hollow San Juan left. "That was a really hard heat and all these guys are my friends," God said. "I knew they're all excellent and well above me on the rankings, so I was clearly the underdog and I'm stoked it turned out that good for me. I was in position on an medium inside wave an Tommy didn't go, that was a sick wave and pretty easy to surf, I was really lucky to get it."

Much like Erostarbe earlier, Nelson Cloarec (FRA), 19, delivered the day's biggest upset, eliminating current men's rankings leader Natxo Gonzalez (EUK), age 19, from the contest. Coming in in fifth position on the European Junior rankings before this event, Cloarec will look to post a major result when the event resumes on finals day to ensure he gets a ticket for the World Junior Finals next January. Cloarec was very convincing on his backhand. - WSL / Gines Diaz

"It's definitely the biggest event of our season and everything will come down to our result here," Cloarec reflected. "That heat was super hard, with Tim who's on fire, Natxo the rankings leader and Luis who's from here and knows the wave better than anyone. But I try not to think too much about rankings and rather concentrate on my strategy for the heat I'm about to surd, otherwise I just get distracted and that's never good."

Sunday will see the finals crown the Teguise 2015 Franito Pro Junior Champions, starting at 9 a.m. for the official call.