Highlights: Red Nose Pro15, Day 1
3:41
Watch the biggest moments from the opening day of the QS6000 in Florianopolis, SC.

The first of three consecutive World Surf League Qualifying Series events in Brazil began today with the QS 6000 Red Nose Pro Florianopolis SC presented by Costao do Santinho Resort and held at Praia do Santinho, on the Island of Santa Catarina. 144 athletes from all corners of the globe arrived looking to earn crucial ranking points and boost their position on the 2015 QS rankings. Close heats, high scores and major maneuvers were on hand as moderate winds remained mostly offshore and continuous sets in the 2-3 foot range (1 meter) offered plenty of scoring opportunities for the athletes in Round 1 of competition.

Willian Cardoso (BRA), the Brazilian powerhouse, led the charge with massive hacks and impeccable flow to earn a 17.77 (out of 20) on his two best waves for the highest heat total of the day.

"The contest took a while to get started, which was fine since I needed a little time to rest after having an early free-surf and it gave me some extra energy to start off strong," stated Cardoso. "It's been a long time since I had to surf in Round 1 of an event, so I felt a little nervous. But the waves were great and I'm very happy with my performance today (Tuesday). I tried to find the waves that were hollower and do the right maneuver at the right time. I'm at a unique moment in my life, my first child will be born soon and that gives me added incentive to do well and achieve my goals." Cardoso's best wave came on a lefthander where he was able to throw two explosive backside gouges without losing any speed to obtain a 9.37 from the judges. He quickly followed on a right, which gave him an 8.40 and a decisive victory in Heat 4. Tristan Guilbaud (FRA) advanced in 2nd, eliminating Seth Moniz (HAW) and Colt Ward (USA) from the event.

In Heat 8 of Round 1, Krystian Kymerson (BRA) used his prowess in the air to earn the day's second highest score after throwing a huge no-hands backside full rotation for a 9.17. After backing up his score with an additional 7.83, Kymerson advanced into Round 2 alongside Jeronimo Vargas (BRA), eliminating two Frenchmen: Andy Criere and Nelson Cloarec.

"It feels great to get a good start at the first of the QS events in Brazil. It was a tight heat, but I think I found the best waves and the wind that was blowing was perfect for airs," said Kymerson. "I like doing big airs, I practice them all the time, so I'm looking forward to trying some more during the contest." The French contingent also looked strong on the first day of the Red Nose Pro with several surfers advancing into Round 2 and will now face the event's top seeds. The Mignot brothers (Nomme and Diego) both advanced in 2nd place in their respective heats. Nomme and Caetano Vargas (BRA) were victorious in Heat 1 over Ian Gentil (HAW) and local surfer Marlon Klein (BRA), who was the trials event winner.

"The waves are really fun out there, but that first heat is always kind of stressful, so it's good to get through," said Nomme Mignot. "I'm happy to be back in Brazil. I just got in from California and it feels good to be competing again. This is my second time to Brazil. I was here in Florianopolis in 2013 for the World Junior Championships at Joaquina, but it's my first time here in Santinho."

During Heat 7, Dylan Lightfoot (ZAF) and Kiron Jabour (HAW) looked sharp as they moved on to Round 2 of the QS 6000 Red Nose Pro. Jabour was the first Hawaiian to make it through to the next round and Lightfoot was the first South African to advance on Day 1 of competition.

"Conditions are really shifty. I didn't go out there looking for lefts or rights, I just wanted to keep an open mind," stated Lightfoot. "But those rights just stood up perfectly for me, so I was glad to get a couple of maneuvers in. I knew that if I got more than three cracks off the top, I knew I'd get an excellent score. I was a little nervous because I traveled so far from South Africa, it's like a 12-hour flight or something ridiculous so you don't want to lose in your first heat. Now I'm ready and excited for the next round."

Jabour, the young Hawaiian had this to say:

"I'm still trying to figure things out. I just got in late last night, so I'm still a little jet-lagged. I just tried to get my balance right and string some waves together. I kind of blew it on some waves, but I did enough to make it through, so I'm stoked. There are two peaks that are working and it's good to get that first heat out of the way. I really like it here; it's beautiful. I was here for the QS event last year, so I'm happy to be back." 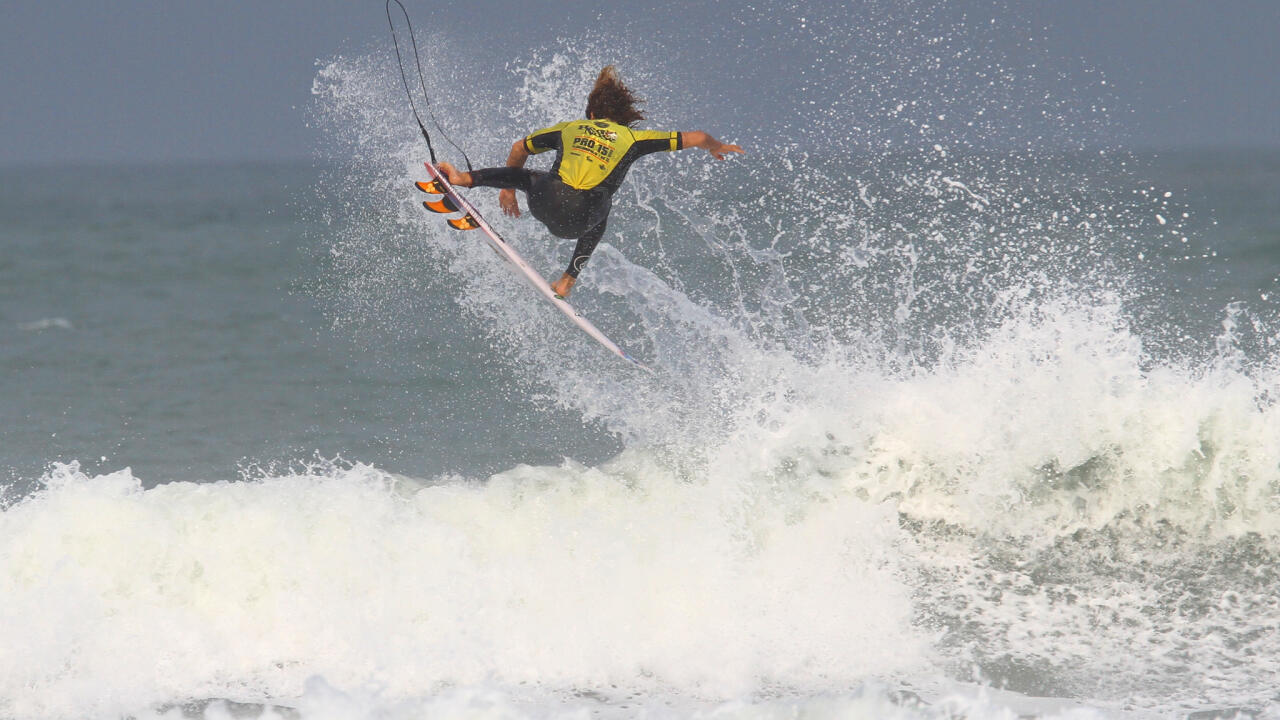 By far the most excitement of the day took place during Heat 13 as Garrett Parks led an incredible airshow to take first place and advanced along with the young Tahitian, Mihimana Braye (PYF). Unfortunately, losing out early with astounding performances were high-flyers Yago Dora (BRA), who scored a 9.17 on his best ride and Phillipe Chagas (BRA) who threw a kerrupt flip for an 8.83, but never found a solid backup score.

"I had a free-surf up the beach earlier and the waves were pretty similar," Parkes said. "My board felt good and I had a couple of good sections, so it feels nice to win a heat. It was a pretty wild start to the heat. I had a few good airs, and then Philippe (Chagas) did a back flip in front of me and I was like ‘here we go…guys doing backflips in my heat', so I had to work really hard to get through that one. It felt nice to get some good scores. Everyone was doing crazy airs and I think the wind helped out a lot, so it was kind of the go-to maneuver. The waves are fully contestable and fun and there are a lot of them, so you don't even have to worry about priority. It's been pretty good so far, so I hope things continue to stay well."

Action at the WSL Men's QS 6000 Red Nose Pro Florianopolis SC presented by Costao do Santinho Resort will resume tomorrow (Wednesday) with a call set for 7:30am (local time). Watch all the action live: www.worldsurfleague.com