Highlights: Mahalo Surf Eco Festival, Day 1
3:28
Watch the biggest moments from the opening day of the QS6000 in Itacare, Brazil.

Good looking waves in the 2 foot range (0.5 meter) and sunny skies welcomed a field of 144 international athletes as competition got underway on Tuesday at the WSL Men's QS 6000 Mahalo Surf Eco Festival at Praia da Tiririca, in Itacaré, Brazil. However, only the first 8 heats were completed as the tide filled in and an abrupt tropical squall quickly deteriorated conditions.

Local surfer Bruno Galini (BRA) got off to a hot start in the first heat of the day. Jumping to a quick lead by scoring a 6.50 on his first ride, Galini stayed busy until he backed it up with a 7.33 (13.83 total) to take first place. Messias Felix (BRA) advanced in 2nd place by a slim advantage over Perth Standlick (AUS) and Tomas Fernandes (PRT). "The contest took a little while to start, but that was fine because conditions were really good during my heat with no wind and glassy waves," said Galini. "I didn't catch any of the set waves, but I stayed a little farther inside and everything worked out. I couldn't hear my heat scores, so I just found out that I had won when I got to the beach. I'm stoked because this event is being run by my sponsor (Mahalo), so there's added pressure for me to do well and win some heats. Now that the first one is out of the way, I can start focusing on Round 2."

With representatives from Japan, Chile, Hawaii and the United States, Heat 2 of Round 1 reflected the current state of the sport of surfing: a completely international affair. Hiroto Arai (JAP) took advantage of the rippable conditions at Praia da Tiririca and chose the best waves of the heat to score a 12.57 and advanced into Round 2. Kiron Jabour (HAW) advanced as well with a 10.50 heat total, defeating Taylor Clark (USA) and Manuel Selman (CHL).

"That was a very fun heat. There were lots of different peaks and everyone had a chance to catch a lot of waves," Arai stated. "I found some good ones and I got some good scores. I'm stoked to have started off with a victory. The waves were good for doing turns or airs, so I did a little of both to advance to the next round." Patrick Gudauskas (USA) continued his torrid pace after a Semifinal finish at the QS 6000 event held last week in Florianopolis (Santa Catarina) and is looking for another solid result in Itacaré. In Heat 4 of Round 1, Gudauskas blitzed the rights at Praia da Tiririca as he connected on several high performance maneuvers to score a 15.66 (7.83 + 7.83), the event's highest heat total so far. Yuri Gonçalves (BRA) scored an 8.67 on his best ride and advanced in 2nd place with a 14.44, eliminating Seth Moniz (HAW) and Keoni Yan (HAW).

The former CT surfer from California is looking to return to the elite division by building his confidence and strengthening his competitive rhythm in Brazil before heading to the decisive year-end Triple Crown events in Hawaii.

"This is my first time to Itacaré and I'm amazed at how beautiful everything is here," Gudauskas said. "When I woke up this morning and made my way over here, I felt like I was on a surf trip. This event is really important for me because I had a really difficult start to the year, but now I'm stoked because I feel like I'm surfing well. I made it to the Semis last week (Red Nose Pro SC) and I hope to get another good result here. I'm just taking it heat by heat and trying to have fun without thinking about the rankings." 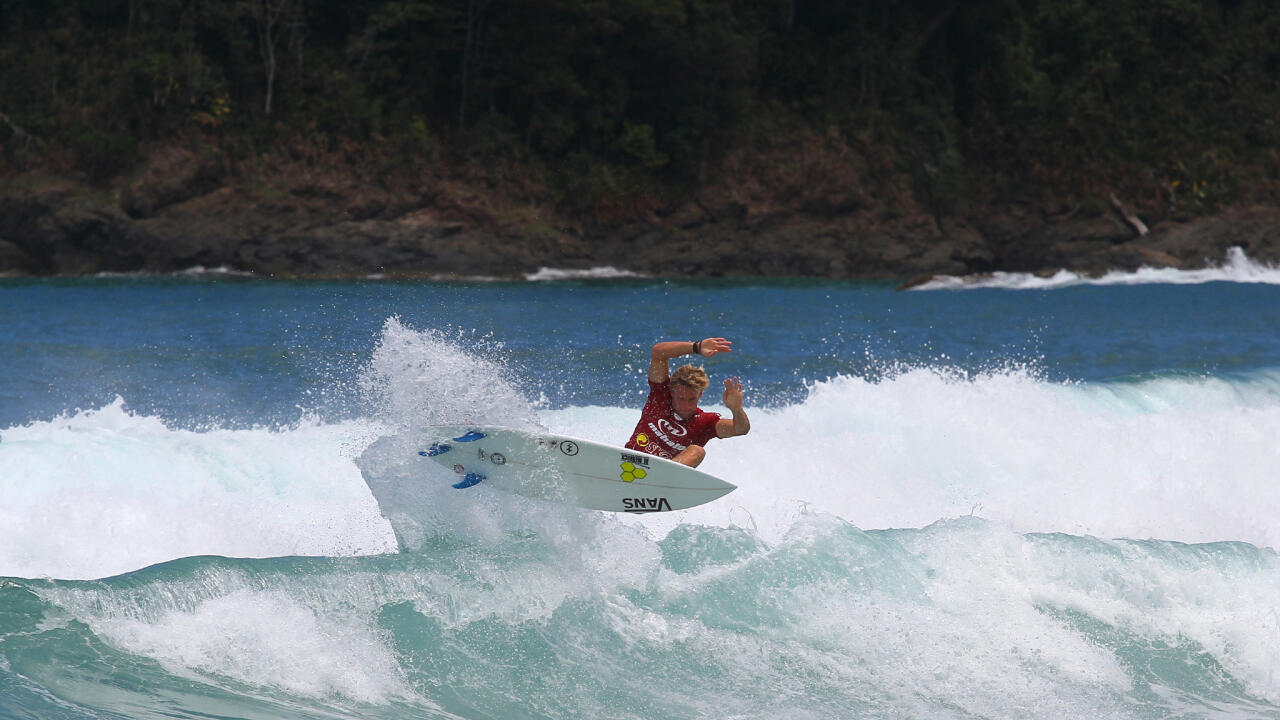 By Heat 8, conditions changed as the wind turned onshore and the tide filled in, making things even more difficult for the athletes. Ian Gouveia (BRA), son of Brazilian legend Fabio Gouveia, was still able to display his combination of fast and powerful surfing to score a 14.43 heat total (7.10 + 7.33) to win the last heat of the day. Mihimana Braye (PYF) also looked strong as he advanced in 2nd place over Francisco Bellorin (VEN) and Caina Barletta (BRA).

"It always seem like I get unlucky and have to compete right before the competition is called off because of deteriorating conditions," declared Gouveia. "At least I was lucky enough to catch a good one at the end and guaranteed my victory. It was tough to figure out which ones would open up, but I'm stoked that I was able to pull through."

Braye, the young Tahitian, was also thrilled with moving on to the next round.

"First of all, Itacaré is a beautiful place. It's very similar to Tahiti, the people are very friendly, the days are sunny and it reminds me a lot of home," said Braye. "I came here for the first time last year and I was able to get a good result. The waves were fun today, but after the tide filled in, it got hard to find two good scoring waves. I'm stoked that I made it through because I need to improve my ranking."

A call is set for 8 am local time to check conditions to continue competition at the Mahalo Surf Eco Festival QS 6000, where a total of U$150,000 in prize money will be distributed. The winner will take home U$25,000 and 6,000 points that are valid towards their 2015 Qualifying Series ranking.