Maya Gabeira outside her headquarters in Nazaré Wednesday, October 28. It was exactly two years since her drowning there. - WSL / Kirstin Scholtz

It's been exactly two years since Maya Gabeira (BRA) nearly died in Nazaré, Portugal, after a falling on a massive wave. She broke her fibula as her feet ripped out of her board straps, was held down for a four-wave set of 50-foot waves and almost didn't make it back on to the ski of her tow partner, Big Wave Tour surfer Carlos Burlé (BRA). When Burlé finally got Gabeira to shore, he and a lifeguard performed CPR to revive her. It was months before she recovered, and even then it was a journey filled with surgeries for her nose and back, physical therapy and baby steps back to the water.

So why would she return to the place that almost killed her?

"Because right now it's the biggest wave in the world," Gabeira said. Standing in a port warehouse where she and Burlé keep their equipment, she was surprisingly relaxed. The two have come back to Nazaré to try again, armed this time with more knowledge, more safety gear and more mountains to surf. 'Today is the birthday, her second birthday, the 28th,' Burlé said. 'We're never going to forget that.' - WSL / Kirstin Scholtz

By now, Nazaré has become something of a second home for Gabeira: She speaks the language and feels welcome not only on the street, but in the lineup, too. "It's still uncrowded," she said. "If I want a bomb, it's there for me to take.

"In other places that space has been filled and it's a bit of a competition. So if you have a wave of this magnitude you can feel comfortable in the lineup and not have to fight for a giant wave. You can prepare yourself and be ready and take it when you can."

It's no coincidence that Gabeira is one of the world's most prominent big wave surfers. She's won multiple XXL Awards (now Big Wave Awards) for performances in huge surf around the world, and has major sponsors like Red Bull and Lululemon. As clouds settled over the Portuguese harbor, Gabeira reflected on the lessons she and Burlé learned from the accident, and what returning to Nazaré has been like.

Did you have any second thoughts about returning to Nazaré? Gabeira has had many loves. Right now, Nazaré has her heart. - WSL / Kirstin Scholtz

I never had any second thoughts. I mean, I had a thought that I didn't want to drown again, for sure! But that includes Nazaré, Jaws, and every place I go to. I don't want to go through that again.

I don't really attach my experience to this place. It had to happen and we learned a lot and we were more prepared this year and we realized that what we had [for] safety and as a team in other places [doesn't] really qualify as a safety system here. [Nazaré] is just a little bit harder, a little bit more dangerous and we had to step up our game and have an extra jet ski and bring someone from Brazil that is a master on ski safety and have oxygen on the beach and a spotter on the cliff. In this place it's mandatory.

We had to learn that the hard way and come back more prepared.

What are the advantages of being local to the wave? Gabeira and Burlé have expanded their safety system for Nazaré, including adding weight to her boards. - WSL / Kirstin Scholtz

It is such a great advantage when you can practice on that wave and practice with your equipment and see the wave in all swells and see how it breaks and how you can surf differently and evolve in that spot.

For you, is that place Nazaré?

I've had love affairs with different waves in different times of my life.

I've had love affairs with different waves in different times of my life. I dedicate my time, work on my equipment and try to be there for the big swells.

Can you remember your first time back in the lineup out there?

It was a bit scary, it was stressful. So I'm glad it was a small day. I could go through the motions. And actually yesterday [Tuesday, October 27] was big, and only Scooby [Pedro Viana] surfed, we put him in because he's the most energized and best surfer of the team and we said, ‘Ok you just go test the conditions and see how it goes.' 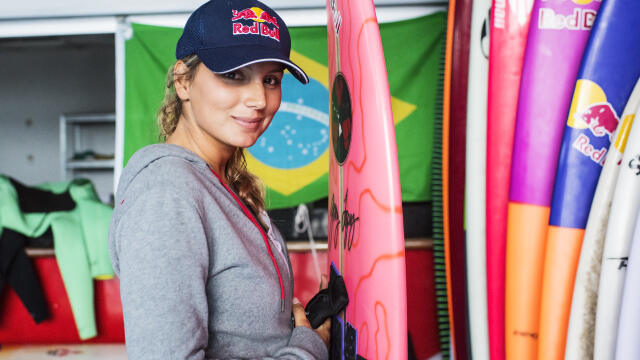 So yesterday was a nice experience, to see and understand and to have a plan. When you have a visual of what you want to do, and how you want to surf, and where you can be rescued and where not to be in the lineup it's easier, so the next big swell I'll be a little more confident.

What is it that makes you want to go out and do that?

I love to have the opportunity to surf days that I will never forget. To be able to catch a wave that I will remember the day, the time, that emotion and feel satisfied.

When you are really present, it's a very special thing.

Sometimes when you have that much adrenaline and you're in that moment and you are really present, it's a very special thing. I don't get that feeling in many things I do in life. To be able to find that zone when you're surfing, it makes me want to do that.

Does it leave you wanting more? Your pursuit of that one feeling?

I don't think it's a one feeling, I think it's a whole experience. Watching it on the maps, and waiting for it, stressing out about it, and not being able to sleep the night before, and waking up and getting your equipment ready, and going to the lineup and seeing what that forecast became and getting to ride it. It's a one-week experience.

What does your family think about your career? While Gabeira's family is supportive of her career choice, they still have something to say about it. Her mom has quipped, 'I wish you had a bit more glamour in your life.' - WSL / Kirstin Scholtz

My mom's here. She was on the cliff. She's been pretty cool. Yesterday she said, ‘Yeah. It wasn't that big. I was expecting it to be a little bit bigger.'

Do you think it's because she's seen the worst already?

Maybe she doesn't really realize what's going on in the water. Yesterday she said, ‘I didn't think much of it. The sets weren't consistent enough.' I thought she was going to freak out.

My mom comes here and she's like, seriously, why did you choose this life?

Every day she comes here [to the warehouse] and we're getting ready and she's like, ‘Seriously, why did you choose this life? You're always wet and it's cold and it's all guys and you're in this harbor. I wish you had a bit more glamour in your life.'

And I said, ‘Oh come on, sometimes I do awards and red carpets.' And then I remembered when I was at the Laureus Awards and I was sick as a dog. It was not glamorous at all, I was puking all over the place.

What's your next frontier, or personal goal?

I don't think that far ahead. I'm still trying to conquer Nazaré.