Highlights: Kerr Wins in Mexico
1:47
The CT surfer topped the field of 24 to earn his first Big Wave Tour victory at Todos Santos in Mexico.

Australian Josh Kerr stunned the big-wave surfing world by winning the Todos Santos Challenge Sunday, earning the biggest victory of his now colorful career. The WSL elite Championship Tour star, who broke in as one of the world's best aerialists and is currently ranked number 11 in the world, surprised many with his gutsy performance in the US$75,000 event. Kerr's share of the purse was US$18,750 and a stunning TAG Heuer Aquaracer watch from the Big Wave Tour sponsor. Josh Kerr and Carlos Burle were on their game all day, especially when the bigger sets came through. Photo: Sean Rowland - WSL / Sean Rowland

"To get a win here is so special," Kerr said afterward. "I literally haven't won a contest for probably about five years, so I don't even know what this feeling of winning is going through my body right now. I'm kind of tripping."

"To walk away with a win - I feel like one of those dogs with his head out the car window. I was smiling the whole time I was paddling around in the Final."- Josh Kerr Kerr was fortunate just to make it to the event. He's dealing with a Green Card process at home in California, and had to plea for a one-day pass in order to surf the event. "I didn't have any expectations," he added. "I just wanted to surf the wave with all these guys. To walk away with a win - I feel like one of those dogs with his head out the car window. I was smiling the whole time I was paddling around in the Final." The Australian's last win came on the Qualifying Series (QS) in 2010, and he's yet to win an event on the Championship Tour (CT). But while career results have been spotty, the one area he's dominated throughout his career is having the most fun. On Sunday, that helped carry him to victory over big-wave legends Greg Long and Carlos Burle. Still, the result shouldn't come as too big of a surprise. Kerr has been calling California home for the better part of a decade, and Baja strike missions have been part of his diet for years in the offseason. The same could be said for former CT star Damien Hobgood, who also resides in Southern California and joined Kerr in the six-man final, where he finished fourth behind Burle. 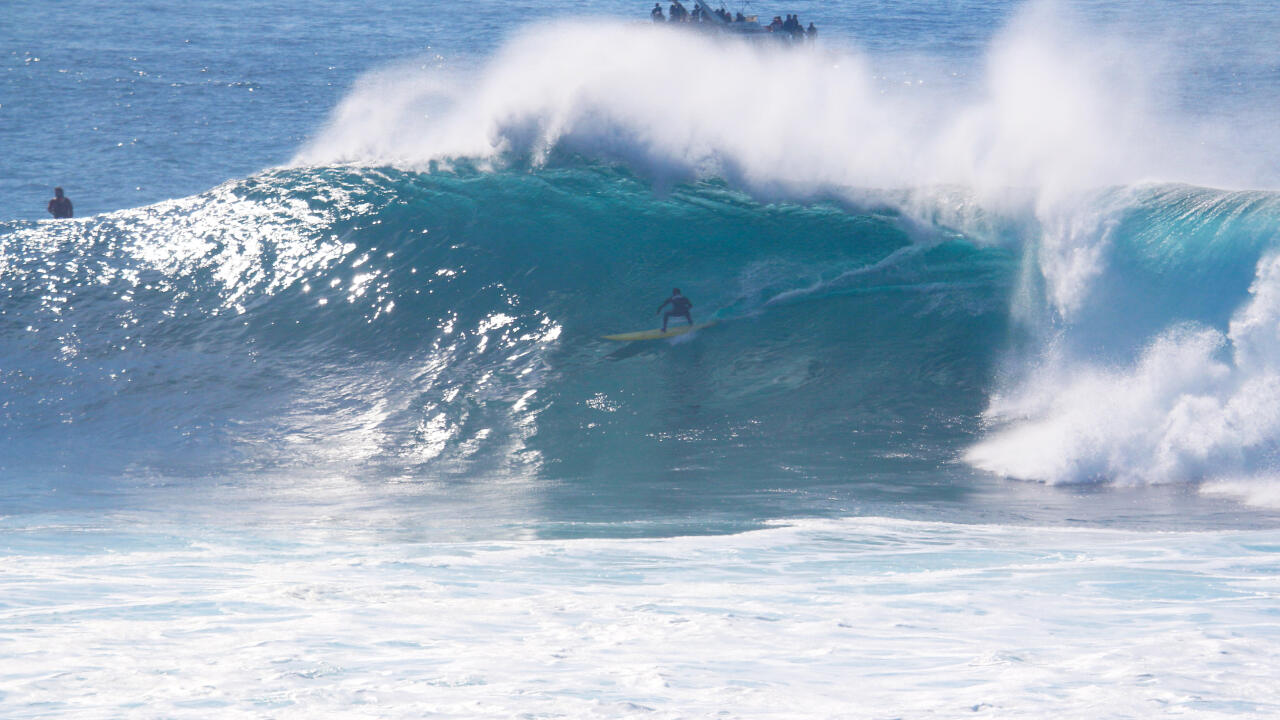 49-year-old Burle won at Todos Santos all the way back in 1998, and he leaned hard on experience Sunday. - WSL / Danny Ecker

With a fresh El Niño swell pulsing along the West Coast Sunday, Kerr, Hobgood, Long and Burle were part of the 24-man field that gathered in Mexico for the third stop of the 2015/16 WSL Big Wave Tour.

Conditions were challenging from the start, as north winds created a healthy dose of lump and bump on the faces, resulting in some spectacular wipeouts, and a busy day for those manning rescue sleds. 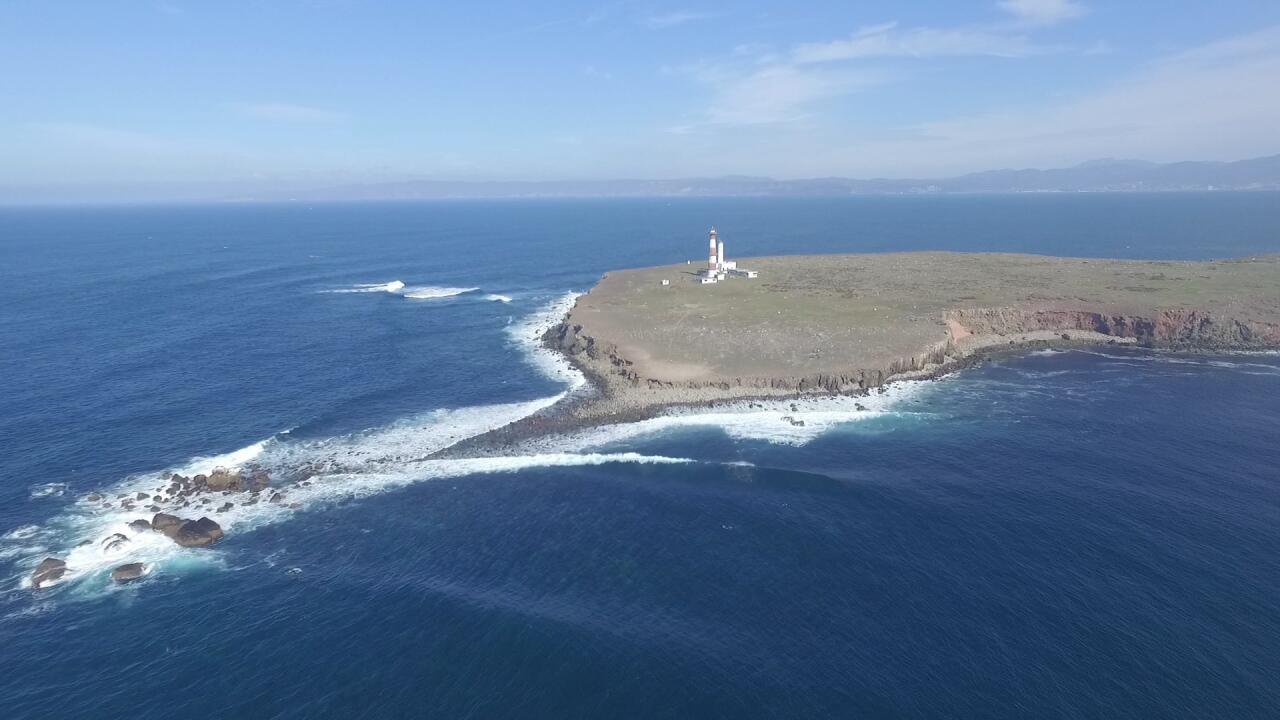 From above conditions on the island looked much more peaceful. - WSL The channel view of Kerr and Burle's wave (shown up top) was just as impressive. Photo: Hallman - WSL / Richard Hallman

Healey, the defending 2010 champion, came out firing on his backhand, with Rothman giving him a run during his impressive Todos Santos debut. Meanwhile, Nathan Fletcher managed to edge Vaughan despite having to make a scary trip into the rocks to rescue his board. Greg Long has been making Todos trips since he was a teenager, and it showed. Photo: Danny Ecker. - WSL

Burle, the esteemed veteran and former big-wave champion who won at Todos Santos during the 1998/99 El Niño season, looked right at home during his opening round. The big Brazilian had his hands full, however, against Kerr, and longtime Todos local Rusty Long.

Road to the Final
5:30
Joe Turpel and Mike Parsons break down the day's action leading to the exciting event Final.

While Burle got the edge in their opening round heat, Kerr got his revenge in the first semifinal, nabbing a bunch of late drops to take his first ever big-wave heat win. "You couldn't wipe the smile off my face during that one," Kerr said after advancing to the final.

Josh Kerr, all smiles
1:16
So-called "dark horse" Josh Kerr on his secret to success in the Todos Santos Challenge Semis.

The bottom half of the bracket was equally stacked, with famed waterman like Australia's Jamie Mitchell, Greg Long, Damien Hobgood, and the Santa Cruz kid Nic Lamb all turning in impressive performances.

Hobgood earned a huge cheer from the armada in the channel after carving his 9-footer through an extended bottom turn and back up the face where he snapped under a cascading lip. The move was among those that vaulted him into the final.

As expected, Greg Long played his usual patience game, letting the insiders go in favor of the bigger bombs. His time-tested strategy paid off in the form of back-to-back heat wins during his first two heats.

With the wind kicking up during the semifinals, and conditions getting gruesome on the face, those with Todos experience used their familiarity to get past visiting stars like Rothman, Healey, and Jamie Sterling, who fell in the semifinals. Outside of 49-year-old veteran Carlos Burle, the easy trend to spot was every finalist lives within driving distance of Todos Santos.

In the final, Greg and Rusty long were enjoying their first big-wave session together in years, and it seemed appropriate it would be at Todos, given it's the place where they both cut their big-wave teeth. The flotilla of fans who made the 11-mile trek out to Isla Todos Santos took in more than some incredible surfing. The scenery isn't bad either. - WSL / Richard Hallman

In the end, Commissioner Peter Mel and WSL officials weighed competitor sentiment and their own experience to award the event a Silver rating status. That means Kerr earned himself 12,000 Big Wave Tour to with paycheck and TAG Heuer watch.