Twenty-year-old Keoni Yan was born in Hawaii and raised in Tahiti by a Japanese mother and a Tahitian father. Growing up on an island paradise was in his future, but his mentors, which include Raimana Van Bastolaer and elite Tour surfer Michel Bourez may provide the foundation for the young competitor to make a name for himself. After claiming his first victory at the recent Sunset Pro QS1,000, Yan took a minute to chat about his origins. Yan's been mastering the speed, power, flow thing of late, and it paid off at Sunset. - WSL

WSL: What was the best part about growing up in Tahiti?
Keoni Yan: To be able to learn French, surf perfect waves, good people and good food. There's a lot of good fish. The water is clean, the vibe is mellow. These days I'm mostly in Hawaii during winter time and California during summer time. I moved to Tahiti when I was a baby because my mom is Japanese and my father is Tahitian. So they couldn't live in Hawaii. After I [finished] High School we decided that it would be better to move to Hawaii because it's cheaper to travel, more media, closer to the sponsors.

WSL: So do you identify yourself more as a Hawaiian or Tahitian?
I would identify myself more as a Tahitian. I went school there, surf there, my family there. But if I want to succeed I must travel and be based in a bigger country. It means so much to me--having French and American passports helps so much while traveling. With the French one you don't need to apply for a Visa to go to Brazil, but the American passport requires one. Knowing I can live any where I pretty much want is a gift from my parents.

WSL: Your first memory of surfing?
Yan: I think I was seven and a half maybe. I started on a boogie board. At one point I tried to stand up and my dad was like, "Maybe we should put you on surfboard." I got a surfboard and I love the ocean and started competing in Tahiti. Every weekend and every day after school we'd go to the beach.

WSL: What was your homebreak?
Yan: When I was young it was the North side [of Tahiti] Papeno'o. Around 14 I started surfing on the other side of the island, Papara, Teahupo'o. Raimana Van Bastolaer started mentoring me around 14, he took me to Teahupo'o for the first time. After that every weekend or holiday I would stay at his house and we would surf the reefbreaks to get better at it. 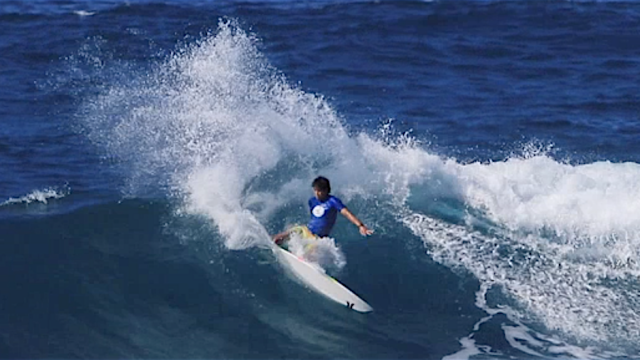 WSL: Have you towed in to big stuff out there with Raimana?
Yan: No, I've never actually towed in at Teahupo'o. It's pretty scary and I'm not that into it. I'm more of a competition guy. As long as you can paddle it, I'll go for sure.

WSL: Crowded perfect waves or empty average wave?
Yan: Average uncrowded waves because you get to have more fun with your friends. It's tough because in Tahiti we're used to not having many people in perfect waves though. But this season in Hawaii, I haven't even really surfed Pipe because you get like two waves in two hours and often they're not even barrels that you get. I surfed more at Haleiwa when it's big because you get so many more waves and there's less people. Two hours at Haleiwa is like five hours anywhere else.

WSL: If you could tell your 5-year-old self one piece of advice what would it be?
Yan: At least finish high school. I finished high school so that if I don't get successful in surfing I have my high school [diploma] so I can go to college if I want to. 20-year-old Keoni Yan is all smiles after his Sunset Pro victory. - WSL

WSL: What do you fear the most?
Yan: Sharks. You don't know when they're going to come. When there are a lot of people in the water you feel safer, but you always know that they're there. Luckily, I haven't seen one, except for in Tahiti. But in Tahiti they are small reef sharks and not really dangerous. When you're in Australia though and you hear the alarm, you get out of the water quick. Or if there's nobody out, you just don't go out.

WSL: What quality do you admire most in other people?
Yan: Kindness. Helping other people, giving advice is the best. Michel Bourez is somebody that's done that for me. He's given me lots of advice and this winter season I didn't have many boards for Hawaii and he gave me a couple. That's helped me a lot. I'm really grateful for him. WSL: What is the most overrated wave in the world?
Yan: Maybe Lowers Trestles. Everyone says it's the most perfect wave. But there's a lot of people and sometimes it's not that good. And there are some people that just get angry at each other. There's a lot of tension out there. It's a fun wave and so rippable. But I think I like a wave that's a little heavier and challenging.

WSL: What's the biggest problem facing humanity?
Yan: Too much pollution. It goes in the air, it goes in the water. And if you want to surf you have no choice. Yan finished with a Semifinal appearance at the 2015 O'Neill Coldwater Classic. - WSL

WSL: What was the toughest obstacle you've had to face?
Yan: When I dislocated my shoulder at Pipe. I dislocated my shoulder right after the Final at Pipe. Everyone was gone, I had to swim in and go to the lifeguard. I had to wait an hour and a half for the ambulance to come because they had to send an ambulance all the way from town. I was in such pain. We went to Kahuku Hospital and I had about two months out of the water. WSL: What was the best day of your life?
Yan: I have a lot of best days! There have been a lot of days at Teahupo'o where it's perfect and just friends out. Barrels all day with friends.

WSL: What's it going to take for you to get to the next level?
Yan: I think I could train more. I'd like to find a coach, it's hard because I don't have the budget enough to get a coach or personal trainer because I have to save my money to get to contests.

Surfing's global reach was summed up perfectly during one heat at the Hawaiian Pro Wednesday.

Competition continues and draws closer to the business end with the women's quarterfinalists decided and Men's third round complete.

Both men and women launch their Pantin campaigns in decent surf on day 2 of the Pantin Classic's waiting period.