The Martinique Surf Pro launched today in four-foot surf at Basse-Pointe and completed the opening two rounds in a massive ten-hour day of competition. Some of the world's best QS surfers took on the playful conditions and put on a great show for the massive local crowds gathered on the point to welcome the return of professional surfing to their island.

Jake Marshall (USA), 17, delivered the day's biggest performance with an incredible display of performance surfing on the long rights. The young American belted a near-perfect 9.80 and backed it up quickly with a couple of other excellent scores to rack up a total of 18.47 points. "It's been fun, Martinique is a really beautiful place and the waves have been pretty good the whole time we've been here," he said. "That was the best way to start a comp right there, ever, I just found some good waves and surfed them and I'm stoked the scores turned out well. But that's just the very start of the event so you can't really get too far ahead of yourself. I have a low seed at the moment and hopefully I can get some points by the time we get re-seeded halfway through the year, so this event is super important for me to do well at."

In his second heat of the day, Marshall placed a close second to an in-form Slade Prestwich (ZAF), 21, with the two surfers exchanging excellent waves. Prestwich put more power into his turns and ultimately got the edge over Marshall, netting his own 9.17 for a spot in Round 3. Crowds gathered on the point to watch the action. - WSL / Poullenot/Aquashot

"I love this island, it's fun, everyone's really open and easy to talk to which is good," he commented. "The waves are amazing, a righthand point break with a beach break down the road. Waves here at the contest site are quite powerful and even when it gets small it's still very fun. A lot of guys were getting really high scores today, you can do a lot of maneuvers on that wave so the level is high and it's going to be a tough event."

Barbados' surfer Joshua Burke (BRB), 19, was another standout on Day 1, advancing through to the third round with a convincing performance and one of the strongest heat totals of the event so far. Coming off an excellent equal-third place in Florida last month, Burke kept his momentum in the fun surf at Basse-Pointe.

"As soon as the heat started a set came through and the guy sitting just outside of me caught the first wave; I was lucky enough to get the second one that lined up better," Burke said. "I got an 8 and right away caught an inside wave for a 6 something, so that was a great start for me. I tried to catch more waves and held priority for a bit, trying to keep the other guys off the best waves. Barbados is a little bit similar, at least the weather is and the waves kind of as well so I feel good competing here." 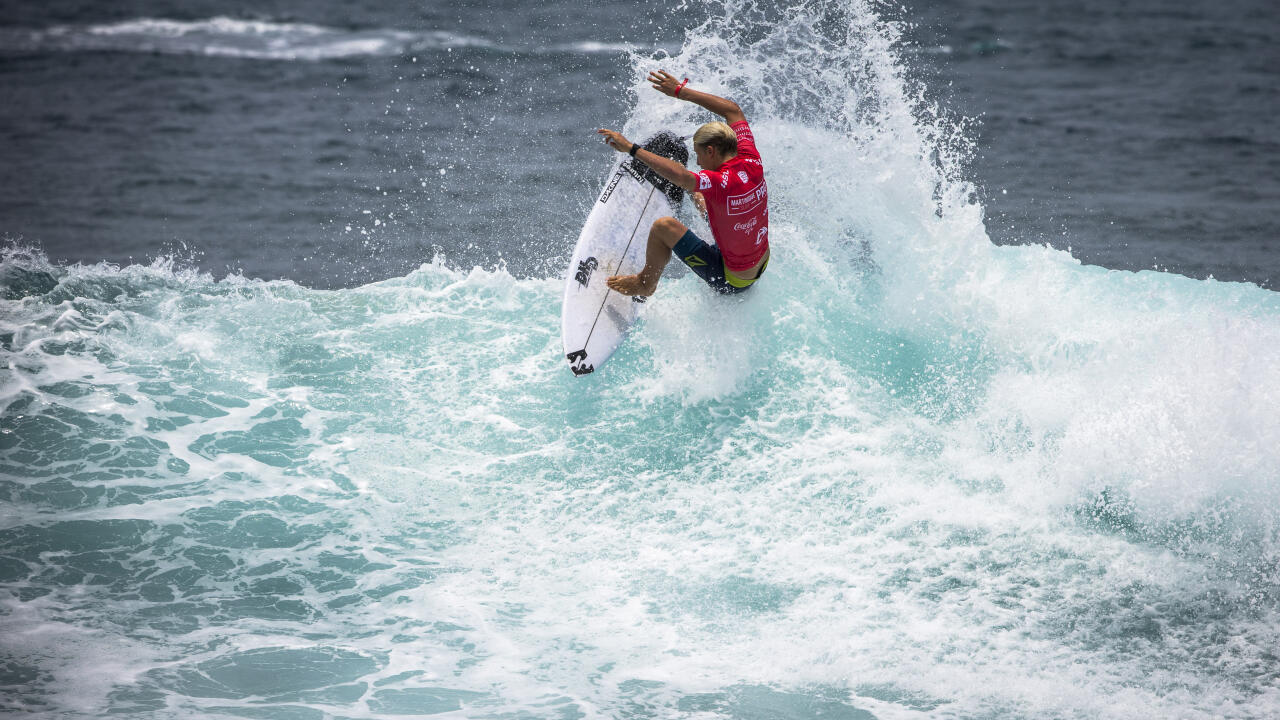 Ewing blows his fins out for a round 3 spot. - WSL / Poullenot/Aquashot

Freshly crowned Australasian Junior QS Champion Ethan Ewing (AUS), 17, came over to Martinique brimming with confidence, and took out his opening heat with a solid two-wave total of over 14 points. With an impressive five event wins under his belt already this season, including four junior events, Ewing looks to rack up more points in his first full season among the QS ranks.

"I was really nervous before that heat, that's one of the biggest competitions I've done so far," he admitted. "Once I got the 8, it sort of got me calmer a bit, but you can never slack off until the hooter goes. I won a QS in Australia and the Junior Series there so I'm super happy with how 2016 has gone for me so far. The people are so nice here and the weather is super hot, it's great to wear board shorts in a comp, the waves are great too, it's some of the best I've surfed in an event for sure."

Surfers and event officials will reconvene Monday at 6:45 a.m. for a potential 7 a.m. start of the third round of competition and another massive day that could potentially see the event's top seeds come into play.