In its first year as a World Surf League (WSL) Qualifying Series (QS) 1,000 event, Round 1 of the Mentawai Pro presented by Rip Curl has been completed in firing four foot waves at the perfect reef break of Lance's Right.

The Mentawai Islands is every surfer's dream destination so the WSL joined forces with the ASC (Asian Surfing Championship) to co-sanction this ground breaking event that truly lives up to the WSL's mantra of putting the world's best surfers in the world's best waves.

Competition got off with a bang with Indonesian super-star and last year's ASC event Winner Oney Anwar (IDN) posting an impressive heat win. Anwar struck early but was left chasing a 5.00 (out of a possible 10). Staying patient, Anwar eventually found a long walled insider that allowed him to smash a number of vertical re-entries to score a 6.75 and progress into Round 2.

"At the start I got some good waves but then I got a bit too picky," Anwar said. "I was waiting for a while and started to get nervous, but I knew when a good one came I could get the score because this wave does a lot of the work for you. It is so perfect here." 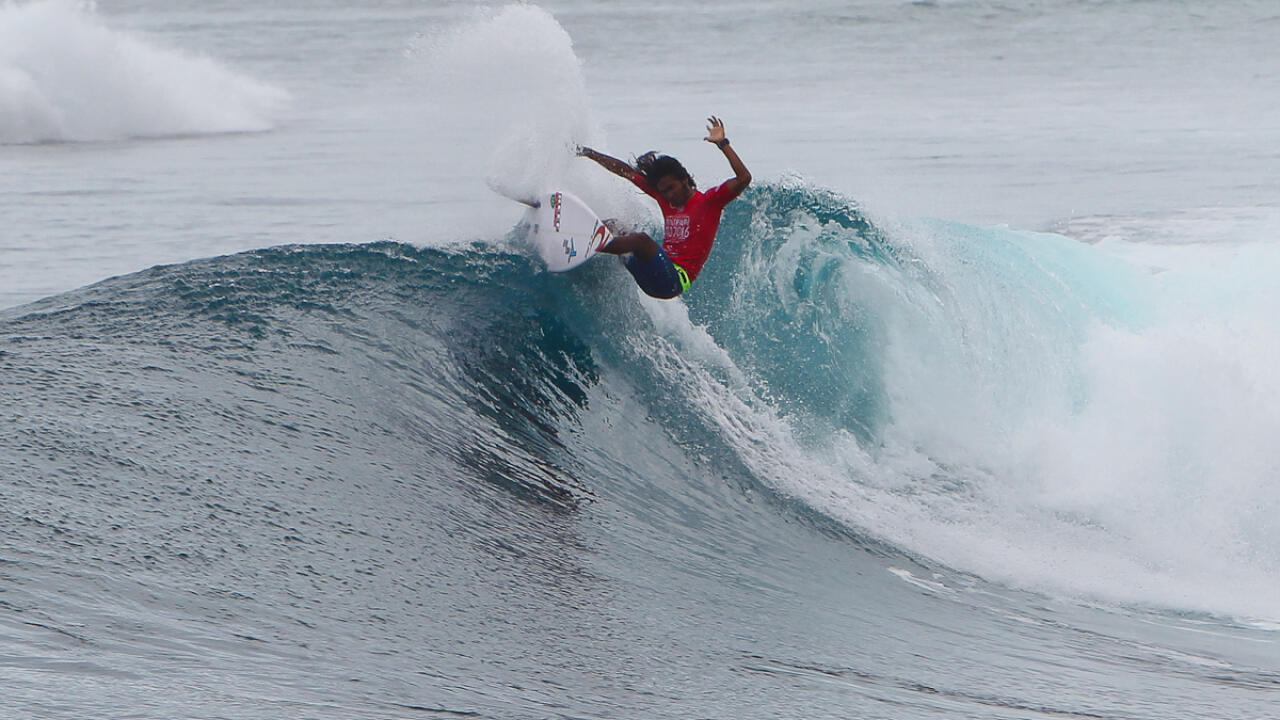 Coming unstuck on his first few waves, Reed Heazlewood (AUS) was looking to use his past experience at Lance's to find a groove at a wave known to be challenging for the backhand surfers. Heazlewood, who was carrying a toe injury landed a floater over a heavy barrel section followed by two huge vertical turns scored an excellent 8.75 to progress to the next Round.

"There's some sick waves coming through," Heazlewood said. "I came here a while ago so it was easy to get back into rhythm with the wave. Just before that heat I sprained my toe so I was a bit hesitant at first but eventually I blocked it out of my mind and got a few scores." Blake Levett was one of the few goofy-footers to take a heat win. - WSL

Riley Laing (AUS) put on a dominant display against two of Indonesia's best in Tipi Jabrick and Dede Suryana. Laing scored a mid-range wave early then followed it up with an excellent 8.50 with a nice long barrel followed by a number of searing cutbacks. Laing, feeling comfortable was able to enjoy himself for the remainder of the heat, leaving his competitors to battle it out for the second qualifying spot, which was eventually taken by Suryana.

"I planned to have the inside at the start and got a set wave straight away," Laing said. "On my way back out I just sat wide of everyone as they seemed to get sucked up the reef and the waves just kept coming too me. Once I got that 8.50 I could relax and just enjoy surfing empty perfect barrels."

In an action packed heat, Blake Levett of Australia went wave for wave against 14-year-old Swedish surfer Kian Martin. Levett looked comfortable riding the tube on his backhand to take the heat win but it was the youngster Martin who showed nerves of steel against his much older competitors. Martin who now resides in Bali will continue into Round 2 with heat winner Levett.

"I love this wave so much so it's so cool to compete here," Martin said. "I have been here eight times now and it doesn't get any better than this place, just barrels and big turns, it has it all. I was kind of nervous competing against all these older guys but I really came here to have fun and having the chance to have another half-an-hour out here with a couple of guys will be amazing." Made Rondi's bottom turn is all class. - WSL

Marlon Gerber is better known for his silky smooth style and dominance of Indonesia's best waves than his ability to win heats. This went out the window when he paddled out at one of his favourite breaks in only his third WSL event appearance. Gerber looked in sync with the ocean as he comfortably progressed the next Round.

"I feel like I have a bit of an advantage out here," Gerber said. "I can't even remember how many times I have surfed here so I'm super comfortable here. At end of the day though, this wave is so perfect, you just have to be smart and pick the right ones, the wave is so good. We have plenty of time to run the contest so we can pick the best tides which is so awesome."

Opting to arrive a few days early paid dividends for Chris Zaffis (AUS) who until last week had never surfed the waves at Lance's. His time in the water was evident as the young Australian waited patiently to find a set wave that opened up allowing him a long barrel, which he was scored a near perfect 9.50, the highest single wave score of Round 1. This went to his heat total of 16.85, 0.10 above event favourite Jacob Wilcox who finished in second and will progress with Zaffis.

"This is such a sick place - the waves are amazing," Zaffis said. "It's been really cool to check out this remote area, it's really nice. I'm glad I got here early and got a few waves to figure out the reef and get a good idea of the set up. It's always cool coming up against guys like Jacob (Wilcox). He is a tough competitor and an amazing backhand tube rider, to get the heat win feels great." In one of the final Heats of the Round another competitor who arrived early in the Mentawais, Skip McCullough (USA) also showed that experience counts. McCullough posted and excellent 8.25 to take an early lead. He left his best till last though when, under priority, he found a sneaky set that offered him two separate, long tube rides. He was scored a 9.00 for a heat total of 17.25, the highest of Round 1.

"I didn't have priority so I was super lucky to get that one," MuCullough said. "When I took of it was so sun lit and prefect it was a really open easy barrel, then I saw that end section so just waited for it and was lucky enough to back door the end bowl. When I first got here I just thought every wave was a perfect and broke two boards straight away so realised it took some working out, getting here early made a huge difference for me."

Lances Right continues to produce the goods for one of the most remote events on the Qualifying Series calander.

The Mentawai Pro pres. by Rip Curl turn it on!

The inaugural Mentawai Pro pre. by Rip Curl QS 1,000 has competitors excited to pull on the contest jersey.