The 2016 Praia do Forte Pro presented by Oi saw another full day of competition take place as nineteen heats were completed on Wednesday. After establishing the Quarterfinalists in the Women's division yesterday, all focus was on the Men's division today as all of Round 1 and Heats 1-8 of Round 2 were finished off at the WSL Qualifying Series 1500 status event.

Light winds and small, rippable waves in the 2-foot range (0.5 meter) at the reefbreak known as Papagente provided an even playing field for the athletes. Wave selection was critical, as the occasional high-scoring gem would pass through the line-up. The first heat of the day started out with a bang as Juninho Urcia (PER) put together a stellar performance by scoring two waves in the excellent range: an 8.00 and an 8.35 for a 16.35 total. Blessed with a coastline possessing world-class waves, Urcia is part of the latest group of young surfers from Peru that are taking the Qualifying Series by storm.

"I'm happy that I made my first heat, I was a little nervous but the conditions helped me out," said Urcia. "I caught my two best waves right at the beginning, so I calmed down after that."

When asked about how he adapted to the difference in water temperature between the warm tropical water in Bahia and the brisk Pacific, he had this to say:

"Well, if I've never been to a spot before, I always try to get there a few days early to get a feel for the place. I come from a place where the water is cold, but the waves are incredible. I've already been here for four days, getting used to the conditions here and that's helped me out a lot. I've also got my coach with me and he's given me a lot of advice." 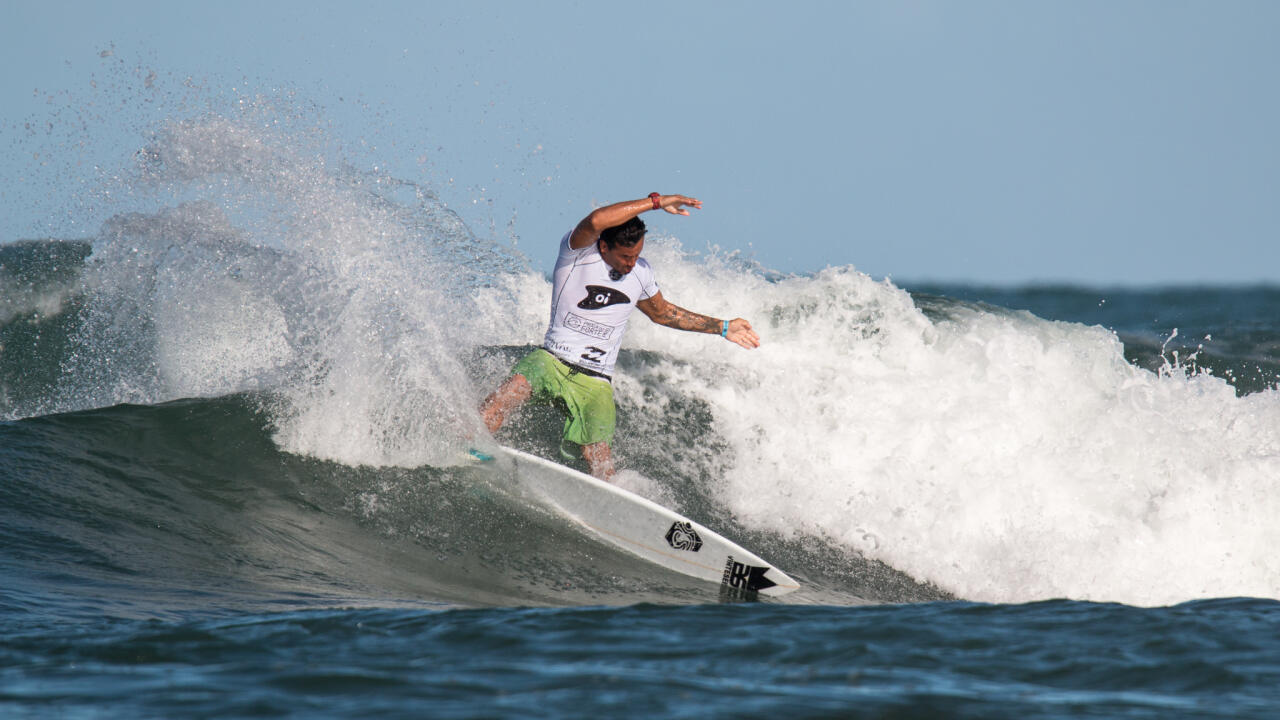 However, the athlete that obtained the highest heat total of the day was Alan Jhones (BRA) who scored a 16.40 (8.75 + 7.65) after destroying a righthander with multiple aggressive hacks in Heat 1 of Round 2. Jhones advanced directly into Round 3 along with Wallace Sampaio (BRA) who advanced in 2nd place, eliminating Hizunome Bettero (BRA) and Raphael Seixas (BRA).

In Heats 2 and 3 of Round 2, emotions ran high as last-minute waves affected the outcome of the results. The defending 2015 WSL South America Regional Champion, Robson Santos (BRA) sneaked into Round 3 behind Matheus Navarro (BRA) after receiving a 5.50 in the remaining seconds of Heat 2, defeating Gabriel Farias (BRA) and 15-year old upstart Joao Chianca (BRA).

Immediately afterwards, Yuri Gonçalves (BRA) also advanced in 2nd place behind Luel Felipe (BRA) after leapfrogging Ian Costa (BRA), who had held the lead for the entire heat until the dying seconds. Other top performers on Wednesday at the Praia do Forte Pro QS 1,500 presented by Oi were Alonso Correa (PER), Leandro Usuna (ARG), who looked strong after coming off a second-place finish at the QS 1500 event held in his home country of Argentina; Ian Gouveia (BRA), the solid goofy-footer from Florianopolis and son of Brazilian surfing legend Fabio Gouveia; Jean da Silva (BRA) who has been a consistent contender on the QS; and WSL Championship Tour athlete Miguel Pupo (BRA), who won the last heat of the day (Heat 8) by collecting a 14.60 on his two best rides (7.50 + 7.10).

"There are no favorites here. I'm an athlete just like everyone else," said Pupo. "All the surfers here are very talented and it's exactly the reason I came here, to tap into the energy of the newcomers. I remember what it was like, trying to get noticed and get better with each heat."

Pupo was astonished with the natural beauty of Praia do Forte. "The scenery is incredible here, with everything surrounded by coconut trees, clear water and a coral reef, which is very rare in Brazil. It's different from everywhere else I've ever been in the country and I like it a lot, I recommend it and I'll definitely come back again," Pupo said. The Praia do Forte Pro presented by Oi is the first event of the 2016 WSL South America Surf Series being held on Brazilian soil this year. The winner of the Men's event will receive USD $25,000 in prize money and 1,500 WSL Qualifying Series ranking points, plus an additional 1,000 points valid toward the WSL South America rankings. The winner from each of the seven WSL Regions will automatically receive entry into all worldwide QS 6,000 and QS 10,000 events in 2017.

A call is set for 8:00 am local time on Thursday as competition will continue in Bahia for the WSL Men's and Women's QS 1,500 Praia do Forte Pro. In Heat 9 of Round 2, Jesse Mendes (BRA) will be faced up against Ruda Carvalho (BRA), Federico Pilurzu (CRI) and Pedro Dib (BRA).