Competition continued on Thursday as a moderate increase in wind produced a slight pulse in swell, providing waves in the 2-3 foot (0.5-1.0 meter) range and more vertical faces at the QS 1500 Praia do Forte Pro presented by Oi. Only the remaining 8 heats from Round 2 were conducted today, leaving a mere 32 athletes gunning for their place atop the podium of men.

Goofy-footers naturally have a tendency to look for lefts. Franklin Serpa (BRA) had this strategy in mind after analyzing conditions before he hit the water at the Papagente reefbreak for Heat 16 of Round 2. Nonetheless, he annihilated two righthanders down the line with repeated backside hacks to earn a 7.50 and a 7.00 for the day's highest heat total of a 14.50. "It's funny because I wanted to go left initially and leave the rights to the regular-footers, but I remembered that my father told me to do more backside surfing during my heats. I didn't throw any airs but I think my top-to-bottom flow impressed the judges and I got some good scores," remarked Serpa.

Marcos Correa (BRA) also looked feisty on his board and was able to advance in 2nd place behind Serpa with a 12.10 heat score. Despite his talent, Michael Rodrigues (BRA), who was deemed as a sure thing to reach the final day of competition, looked out of sync in his heat and repeatedly fell on his aerial attempts. Although he was eliminated from competition, Rodrigues never lost his sense of humor as he raised his arms in celebration after coming out of a "sick" 1-foot barrel. The other major upset of the day occurred in Heat 14 of Round 2 when current WSL Pro Junior World Champion Lucas Silveira (BRA) was defeated at the Praia do Forte Pro. Alan Donato (BRA) took the victory by putting up two mid-range scores, which totaled 12.50 (6.50 + 6.00), while Alonso Correa (PER) maintained his consistent competitive flow by securing 2nd place with a 7.50 and a 4.25 to advance into Round 3. Despite computing ten waves, Silveira only earned an 11.25 heat total, being eliminated alongside Michel Roque (BRA) who scored an 8.15 total.

Thiago Camarao (BRA) and Mateus Herdy (BRA) put on a show in Heat 12 of Round 2. It was an electric heat as both surfers went back and forth with entertaining rides. Camarao, who is one of the many QS surfers currently competing without a main sponsor, caught some good hang time on a huge air reverse on a punchy righthander to earn a 6.65. Herdy, who surfs like a "mini-Taj Burrow", countered by linking together a combination of high speed carves and well executed airs for a 10.75 heat total. But it would be Camarao's fusion of power and flow, which put him in 1st place after netting a 6.90 on his last ride for a 13.55 heat total. 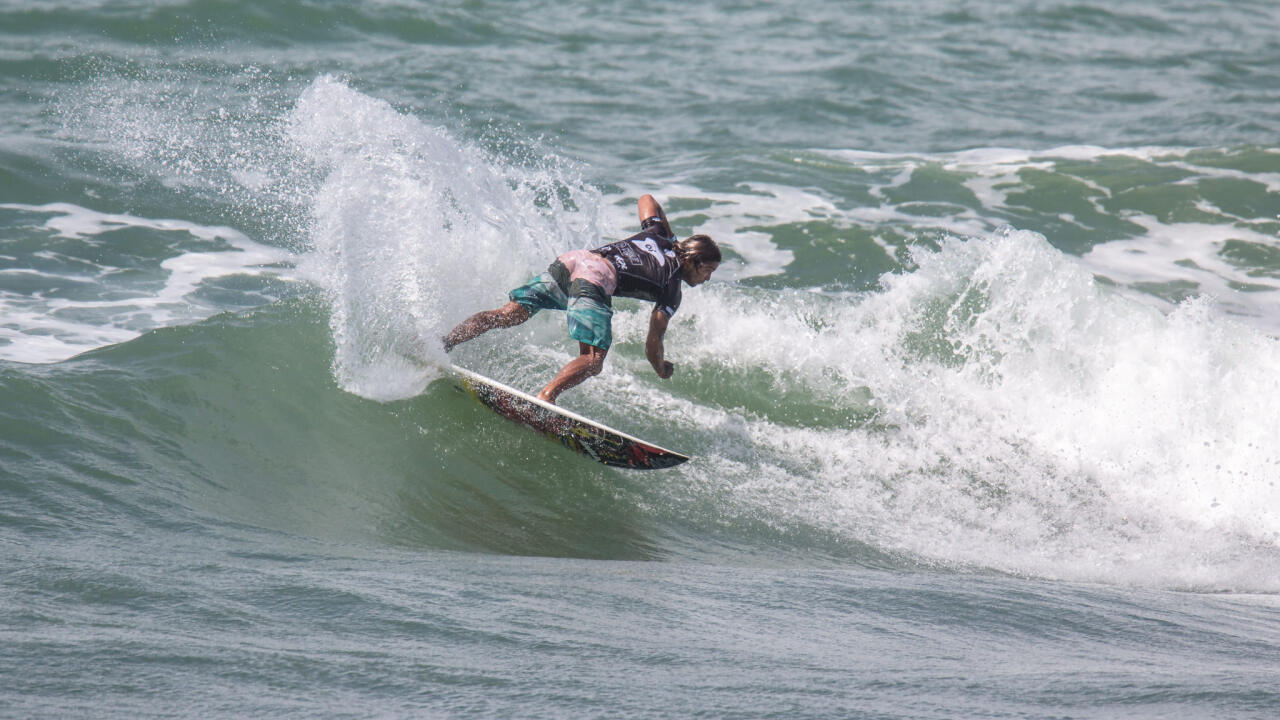 "I knew it would be the kind of heat where two big turns would get you a good score," Camarao observed. "Mateus (Herdy) took control at the start of the heat and it's cool to be competing against someone so young who just turned pro and has the talent and mentality to back it up."

When questioned about his schedule for the upcoming QS events, Camarao had this to say:

"It's tough because I spent the last 12 years with a main sponsor and all of a sudden we ended up not renewing my contract. So things are more difficult now, but I've opened up a surf school and I'm trying to balance work and competing at the same time. It's a new phase for me, but most surfers have gone through the same thing, so I'm taking it all in stride. I'm doing the best I can, and since a lot of events have been canceled, I'll only be focusing on the major events this year." Hometown favorite and local surfer Bino Lopes (BRA) rounded out the list of top performers on Thursday at the WSL Men's QS 1,500 Praia do Forte Pro presented by Oi. Lopes looked comfortable as he put together a 13.85 heat total (6.50 + 7.35) in front of strong support from onlookers at the beach. Samuel Pupo (BRA), brother of WSL CT surfer Miguel Pupo, was able to display his modern-day technique to advance into Round 3 as well.

"To be honest, I was really nervous at the beginning of the heat. Although there's a good side to competing in front of your friends and family, there's a lot of pressure as well," revealed Lopes. "I just wanted to do my job out there and catch the right waves. I'm very familiar with this spot so I knew which ones to paddle into." Common to many athletes, Lopes is returning from a serious knee injury and talked about his recovery process.

"I've been on a strict rehab regiment and I've been feeling a lot better. At the last event in Martinique, I felt like I surfed a lot better, but more in a psychological sense than physically. I'm still a little stiff, and there are some things I still can't pull off 100%, but nothing that's going to limit my performance here," completed Lopes.

A call is set for 9:00 am local time on Friday for continuation of the WSL Men's and Women's QS 1,500 Praia do Forte Pro presented by Oi.