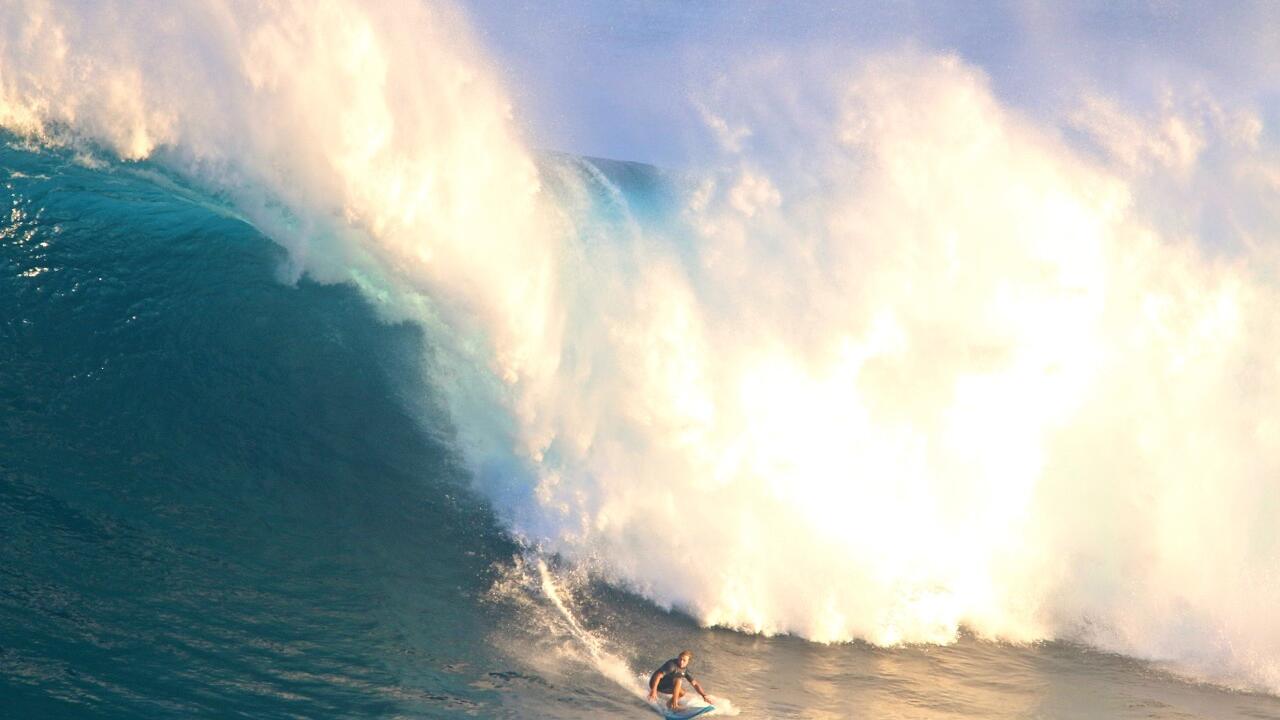 Mark Healey has been a perennial performer at Jaws, and a consistent nominee at the annual Big Wave Awards. - WSL / Dooma Photos

Some say that surfing is a selfish sport. We alter our days, our weeks, follow the forecast to arrange and manage our time -- our entire lives -- to suit the obsession. And then once that's arranged, we want the waves to ourselves, and the best ones. The biggest ones, if possible. There's definitely no TEAM in SURF.

But we're not all like that. In fact, there exists a brotherhood within our obsession that knows how important it is to look after one another. A brotherhood that, year after year, shares experiences in life-or-death situations that the average surfer, let alone human, can never understand.

I'm talking about big-wave surfing, by the way. And a guy that understands this brotherhood as well as anyone is North Shore, Oahu's Mark Healey. Besides being a freediving extraordinaire and Hollywood stuntman, Mark is first and foremost a big-wave guy. A big-wave guy that knows how indispensable it is to be trained in safety, how to look after his peers in the water, and what to do when things go sour. Like on May 22 when Aaron Gold nearly lost his life on a two-wave hold-down at Outside Cloudbreak. No selfish surfers that day.

After that emotional trip to Fiji, Healey discussed this close-knit brotherhood of big-wave surfers and what they've done for the surf world in terms of safety, what really scares him and his thing for sharks.

WSL: Watching a close friend like Aaron Gold -- a guy you surf with at home and share a lot of heavy experiences with every winter -- nearly drown, must be hard to explain. What have you learned from days like that? Mark Healey: One of the things I see a lot is that it doesn't matter if jet skis are there, or if people are around. It has to be people around that are aware and attentive to these kinds of situations. People that know when things are going wrong and how to act immediately. It's so important to have knowledgeable people with experience giving 100 percent attention to the situation and safety on days like that. Not people doing double-duty trying to film and do safety at the same time.

So basically we can't only rely on other people around to help us. We have to be there for each other. And that's why we've started a big wave safety summit. You can't rely on people with boats and jet skis to know what they're doing, or even the location being close to help or a hospital, or relying on the people who profit off of what we do [laughs]. I'm just really glad people have been more proactive in learning.

Strike Mission
0:59
Mark Healey finds one of the heaviest barrels of the day and emerges with the spit.

WSL: What's the Big Wave Safety Summit?
MH: Well, since Sion Milosky passed, we've been doing them about once a year on the North Shore and we've done one at Half Moon Bay, too.

WSL: Wow, who started that?
MH: Pretty much Kohl Christensen, Danilo Couto and Suzi Milosky. I think there's been about three now. Brian Keaulana helps a lot too. I'd even say that due to these summits, Aaron Gold's life was saved. Like, once we got him, Greg Long took point immediately-Greg was doing compressions and I was doing breathing. That communication is huge because people can start freaking out and crying and wigging out, but with Aaron, the communication was impressive.

The Performer
1:00
Mark Healey paddles into one of the biggest beach break waves at Puerto Escondido on May 3, 2015. Video by Alexey Orlov.

WSL: So I assume you guys take classes for these kinds of situations.
MH Yeah, every year we get CPR certified, take the courses, practice together, or practice a situation that could be a drawn-out CPR process. For instance, Ryan Hipwood had to come in and relieve Greg during this situation because Greg was getting tired just pumping on Aaron's chest and you can't have the integrity of the compressions getting poor. That's something we literally trained for.

When you expose yourself to danger that many times, you're bound to be vulnerable at some point.

WSL: How do you guys click out of panic-mode or taking it personally with a friend involved, and go into focused, life-saving mode?
MH: Well, Greg Long and I have had experience in this area, and I think people that surf big waves have a predisposition to this stuff, being in heightened moments with a lot of adrenaline requiring focus. Plus, with Aaron -- who's my friend -- it made me focus even more knowing that my emotions couldn't get in the way. I can't speak for him, but I imagine it'd be the same for him if it were me needing saving.

WSL: How many people have you had to save over the years?
MH: Two full-blown gnarly ones before this...and then plenty of rescues. Just being out on the North Shore, you end up helping the lifeguards because you're there and focused, so it's kinda all hands on deck when something happens. Cloudbreak is one of Healey's favorite waves. - WSL / Kirstin Scholtz

WSL: As far as the brotherhood aspect, I feel like a lot of people see surfing as an individual sport, selfish even. But what about in the big-wave realm?

MH: It's a different world from other parts of professional surfing [laughs]. It's much more family. What might drive the rest of the industry...you can only look cool so many times when you're exposing yourself to big waves. When you expose yourself to danger that many times, you're bound to be vulnerable at some point. And I think everybody understands that and you can only hide that with so much bullshit. It's gonna get real at some point, that's for sure [laughs]. One of Healey's paddle-in nominee entries in 2015 was this Puerto Escondido bomb. - WSL / Ben Decamp

WSL: Is that difficult or complicated, handling so many spinning plates out there? Having to take care of yourself, while looking after your peers, while catching a giant wave?

MH: Yeah, I mean it's a full plate. You're never relaxing and you're never completely relying on anyone else. It's always a very, very involved day.

WSL: When are you actually scared? Or actually out of your comfort zone?

MH: Well, you always have some level of fear, hopefully it's healthy fear. There's definitely different varieties of fear, but to me, you really feel it when you run out of options. I don't like not having options or a game plan, with just some aspect of control. Getting injured in really big waves is a spooky one, like, breaking your ear drum -- you lose your equilibrium and it can be difficult finding the surface. Or hitting your head real hard and getting the daylights knocked out of you; basically incapacitating things. But also even getting plain worn out. I don't care how many big wave wipeout courses you've taken, if you haven't taken five 20-footers on the head, it's a different beast. You could hold your breath for 10 minutes in a pool, but with that much adrenaline, doing max cardio and your heart beating so fast -- it just can't be appreciated until you've experienced it.

WSL: You still working with sharks? What drew you to them?

MH: It just ended up that way. I started by helping camera guys do safety work with Great Whites. Then it was with scientists getting them tagged. I guess the general theme with me and sharks is through my background with spearfishing and spending so much time freediving without all the bubbles and getting really close to animals underwater. I have an understanding of both their behavior and how to get really close to them without spooking them.

There's definitely different varieties of fear, but to me, you really feel it when you run out of options.

WSL: Have big waves opened your career path more than other avenues in surf?

MH: Oh yeah. The only reason that I'm a professional surfer is big waves. It sure as hell ain't for my small-wave surfing. [laughs] If you watch me at Rocky Point you'll realize that pretty quickly. But even when I first started surfing professionally around 17, I knew it was my golden ticket and I milked all aspects and avenues surfing -- especially big wave surfing -- led me to. Basically, surfing was my lifetime college scholarship [laughs].