Highlights Day 5
4:02
Progressive maneuvers are taking center stage at the Ballito Pro as young guns and legends clash in the QS10,000.

The amount of flexibility required to truly compete in today's small-wave surfing arena is stunning, which is what makes Leonardo Fioravanti's performance today so impressive. Only 18 months ago the big Italian was in the hospital with a broken back. But none of that seemed to be bothering him today. The waves were small and punchy and body torques, airs, and laybacks were again the norm. A nice look at why Leo Fioravanti is the current QS leader. - WSL / Kelly Cestari

He was surfing loose and relaxed, and despite coming in second to Davey Cathels in Round Four, he finished ahead of Dusty Payne and advanced. Fioravanti's lead in the Qualifying Series rankings seems secure for now; he heads into man-on-man matches with more than 6000 points over Brazilian Deivid Silva, the highest-ranked surfer still alive. Australia's Cooper Chapman is also in the mix, but trailing by more than 8000 points. If Fioravanti's lead holds, it's going to be a treat having the young Italian on the Championship Tour next year.

Beyrick de Vries put in another solid performance on Friday. Taking to the air whenever he saw the gap, the young local blazed his way through to the Top 16, taking no chances against Joan Duru and Ryan Callinan. Callinan, who came up short of advancing, is now heading for J-Bay (where, by the way, it is absolutely firing). Australia's Cooper Chapman will be climbing into the QS Top 10 with his solid result at Ballito. - WSL / Kelly Cestari

De Vries is having a strange but good year. He decided to have a year off, just go surfing, and release himself from any sponsorship duties. It started out well, with a win at the Vans Surf Pro Classic QS 1,000 event, soon followed by a third in the Cape Town Pro QS 1,000 event. By making it to the top 16 and guaranteed a ninth place here in Ballito, the kid has had a cracker start, and has already said that he is going to use his prize money to head off to the Vans US Open of Surfing QS 10,000 event happening toward the end of July. Beyrick's situation lends itself to some strange advice -- want to have a winning streak? Disengage from your sponsors. Hawaii's Ezekiel Lau will face Stuart Kennedy in the Round of 16. - WSL / Kelly Cestari

"It's so cool to see all the familiar faces and everyone up and about so early in the morning," said a cheerful De Vries after his heat. "It's nice to be competing at home, to not have to deal with a foreign language for a change."

De Vries has a controlled approach to surfing in a big event like the Ballito Pro. "You're definitely mindful of the fact that it's a big event, but thinking too much about 10,000 points is not going to get you onto your first wave, you first turn and your first score." CT Rookie Jack Freestone blazed through Round Four on Friday. He'll face Brazilian Bino Lopes in the Round of 16. - WSL / Kelly Cestari

Our gaze went back to Jordy, but he failed to find magic, despite nearly pulling off a massive, double-grab air. He limped through in second place behind Cooper Chapman and ahead of Kai Hing, both from Australia.

Beyrick and Jordy will meet in Round 5 in a man-on-man heat. 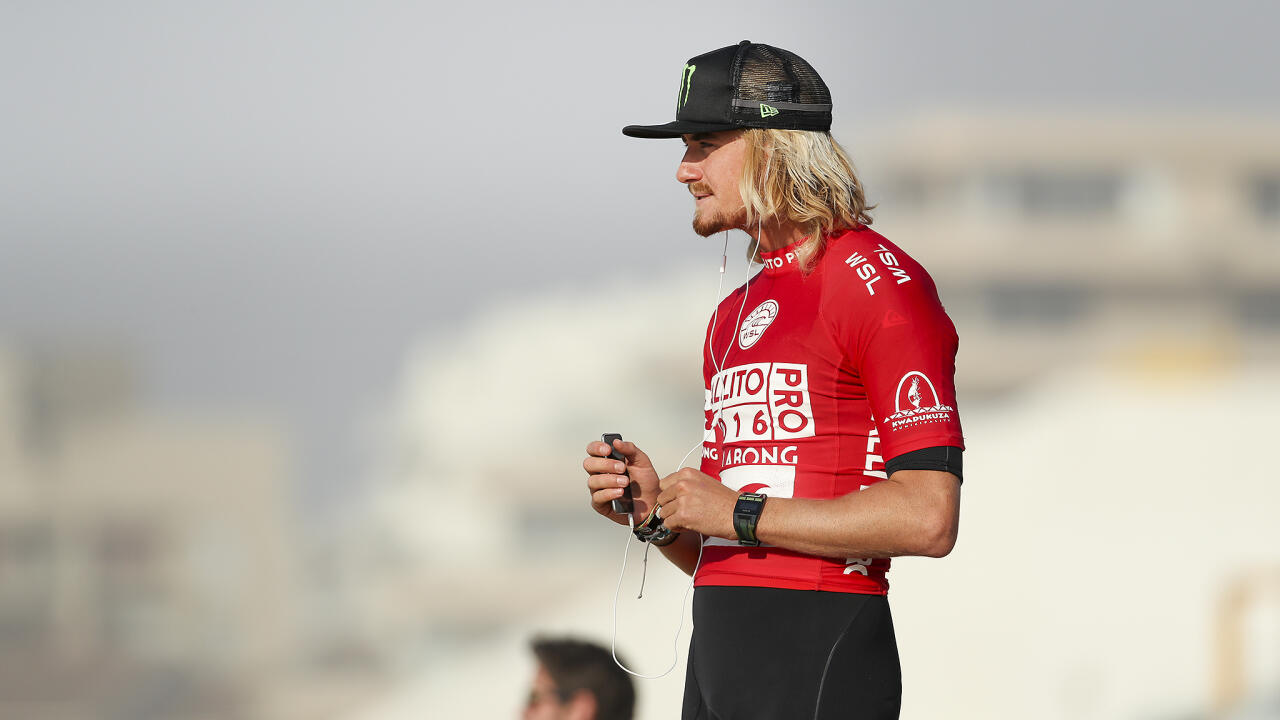 The move of the morning was from a very determined Jack Freestone who launched into a dramatic forehand grab rotation into the flats. He disappeared under the whitewater explosion but emerged a second later for the single highest-scoring move of the day at 9.33 points.

"I like it here," said a smiling Freestone after his heat win, and who wouldn't? Aussie upstart Ethan Ewing is one to keep your eyes on. - WSL / Kelly Cestari

Australia's hottest grom on the rise right now is Ethan Ewing, and he was the star of the last heat. The little guy was showing his freshness to the game afterwards. "It's my first QS 10,000, so I'm just trying not to get super nervous in my heats," said the young Australian. "I'm just going to pace myself, take it slowly."

Ewing, who's ranked 22nd and climbing, will face QS leader Fioravanti in the man-on-man Round of 16. Set your alarms for that one. The Ballito Pro will kick off again on Saturday at 7 a.m.