Past Champions Rise and Fall
1:41
All of Friday's action that witnessed 1/3 of the field go down and have an all-important weekend draw be determined.

After Friday morning's proceedings the field of 96 is now down to 32 at the Vans Pro Men's QS3,000. Competitors arose to a Virginia Beach sunrise revealing fun conditions to contest the final heats of Round Three. There are no easy heats here at the 1st Street Jetty and each passing day proves that fact more and more, heading into the weekend's action. Another day of promising action was revealed by a 1st Street Jetty sunrise dawning on the completion of Round Three. - WSL / John W. Ferguson

The heat that came to life and had fellow competitor's eyes locked in included a stacked heat with Griffin Colapinto, Kilian Garland, Hiroto Arai, and Cam Richards having one of the best exchanges of the event thus far. Garland took off to an early, big lead with a 16.10 (out of a possible 20) heat total but it was Colapinto who capitalized on the four wave set that had all four surfers locking in solid numbers. Posting a 9.17, Colapinto added to his previous 7.53 for a narrow win over Garland and both are into an all-important Round 4.

"I couldn't believe the waves were this good walking up the past two mornings and wanted to surf my heat yesterday but today ended up being just as fun. I wasn't expecting that at all thinking a couple of 6s would be getting us through then Kilian had two 8s in the first five minutes so it was a battle after that. A big flurry of waves came and everyone got a great wave in that exchange -- it's so fun to have a heat like that and feels amazing when you come out of it with a win. I'm stoked that I'm surfing smart heats which is something I've really been trying to do so hopefully keep that going into the next one." Colapinto has his mind on the now which could be a deadly combination with his bag of tricks. - WSL / John W Ferguson

2013 Vans Pro Champion Pat Gudauskas made his debut in terrific posting to start the morning's proceedings with an 8.00 and winning his Round 3 bout. The San Clemente, Calif., surfer found victory in the first year he competed at Virginia Beach and, with a renewed vigor to qualify, will look for another big win this year. Surfing against one of his role models coming up, Gudauaskas was elated with a brilliant performance and will direct all of his focus into Round 4.

"To surf with [Aaron] Cormican was a treat. He's my favorite East Coast surfer of all time and he's just a guru over here so that got me super fired me. I'm really stoked with that first heat since I'm looking for some momentum heading over to Europe and with a lot of contests getting cancelled it makes each one that much more crucial. One of the key things I've been focusing on is to just stay in the moment because it's easy to get excited with everything coming up. It's a good change of pace to keep that focus after thinking, at least over the first few years, that it was going to be easy getting back on tour but with how challenging the QS is these days you just have to be present every day." 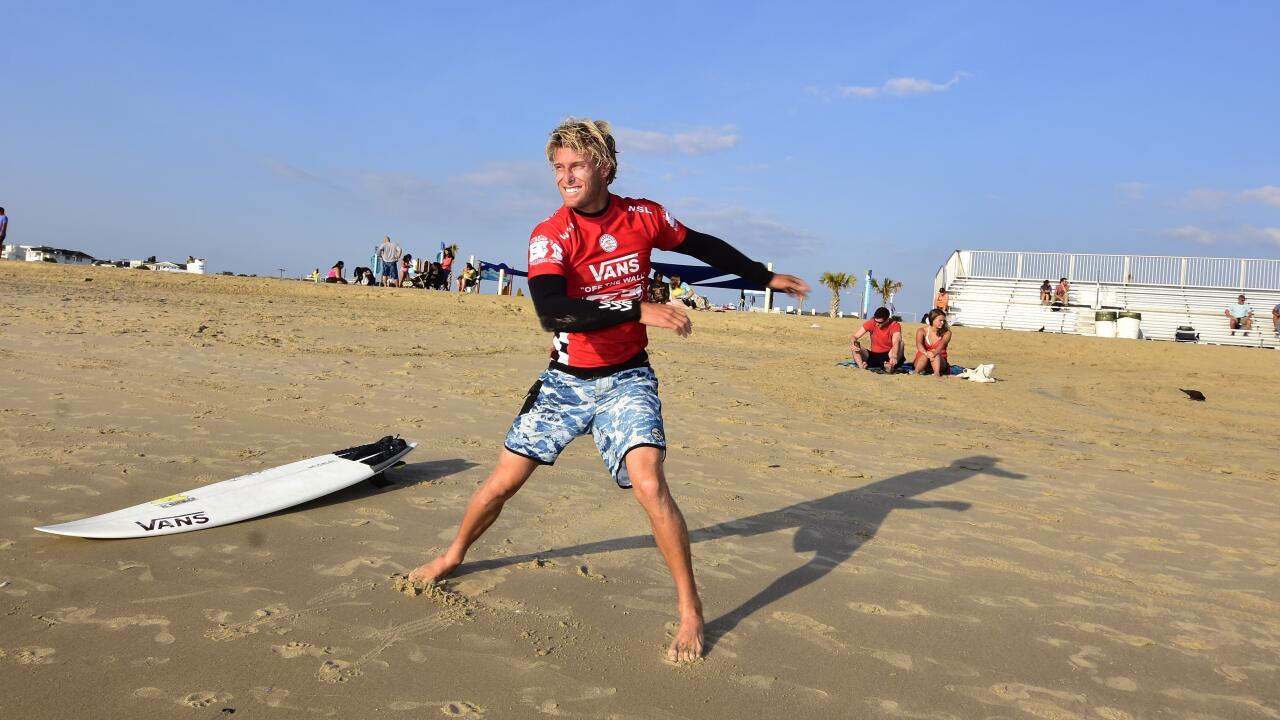 Gudauskas came out of the gates firing this year with a win at Shoe City and still sits in the top 15 of the QS -- another win here would be just the spark needed heading into Europe. - WSL / John W. Ferguson

Also staying in the moment and finding his rhythm, 2014 Vans Pro winner Michael Dunphy is back in home waters and relishing each day spent here. Working to find a keeper result this year, the Virginia Beach, Va. standout will need more scores like the ones today in order to make his way back to the Finals.

"I really just want to do well here. I'm having a tough run at the QS this year and I've lost a lot of heats like that lately so that was a good turn around. It's even better having a good run here at home-having my family and friends here to support me instead of me being halfway around the world with them watching online at midnight. I don't want to look too far ahead with what I have to do in front of me but a win would amazing." Dunphy is looking calm, cool, and collected here at Virginia Beach -- something that has worked wonders in the past for the former champion. - WSL / John W. Ferguson

Looking to make a big charge heading into the back half of 2016, Brett Simpson came out firing on all cylinders posting an 8.23 and 7.50 in his debut. Only finding one solid result so far this year with an equal 17th at the Vans US Open of Surfing, the Huntington Beach, Calif. native found the gems still on offer and did not let them go to waste.

"I was so stoked to get my rhythm in that heat after watching a slow heat just prior to paddling out. It was my plan to stay furthest out and if the wave comes just put up my best surfing instead of chasing the smaller ones. I kept building my scoreline and that was great because your freed up by the end of it and that's when my eight came. It was definitely one of my best heats from start to finish in a long time so it felt great."

Spotlight on upcoming Round 4 matchups: Don't let the smile fool you, Flavio Nakagima is on a mission here in Virginia Beach thus far taking out some heavy-hitters including Brian Toth. - WSL / John W. Ferguson Ian Crane will be squaring off against Dunphy and two in-form surfers at this event -- Rafael Pereira and Krystian Kymerson. - WSL / John W. Ferguson Though Mitch Crews (red) is relaxed on the beach, once in the water he is a threat to be reckoned with and will have a super heat on his hands with Pat Gudauskas, Griffin Colapinto, and Indonesia's powerhouse Oney Anwar. - WSL / John W. Ferguson