Andrew Cotton is one of the more intriguing invitees to the inaugural Nazaré Challenge in Portugal. The 36-year-old from Croyde, England, is a father of two and a plumber by trade, but he's established quite a remarkable connection to Nazaré in recent years. So much so he's become an international big-wave star.

While Cotton broke in as a tow-in surfer, he's embracing the paddle-in movement. This wave earned him a paddle-in nomination for the Big Wave Awards. - WSL / Bruno Alexio/Big Wave Awards

His tow-in sessions at Nazaré are routinely heralded by the mainstream media in Europe, where he's become a bit of a household name. "Cotty is a classic," says the WSL's Bill Sharp, the man behind the annual Big Wave Awards. "He emerged from the XXL mist a few years ago taking on backside bombs in Ireland at Mullaghmore Head. Then he was spotted on more beasts at Nazaré, and he's been submitting incredible entries ever since. And now he's got a crew of UK chargers with him, like Tom Butler and Tom Lowe."

The success is broadening Andrew's career. Now, when he's not surfing monster waves or fixing toilets, he's doing gigs as a motivational speaker, talking to businesses and corporations, universities and fitness groups. He's also hired to speak at product launches and trade shows. His first love, however, is the pursuit of big waves. Nazaré, in all its glory. - WSL / Vitor Estrelinha

Cotton chatted with the WSL about his personal connection to Nazaré, as well as the prospect of competing in the newly created Nazaré Challenge.

WSL: It gets pretty big down there in Nazaré. What, in your opinion, is the biggest you have towed there?
Andrew Cotton: It's difficult to say, I'm no expert on measuring wave faces, and I'm sure everyone would have a different opinion, anyway. Is it where the lip lands? And where is the actual bottom? I have however seen some crazy-big waves there the past seven years which have blown my mind, and amazed me at the actual speed they can travel. The biggest we have towed it was a 6.9-meter swell back in February 2014. ...I had never seen waves move so fast and mountains of water so big. It was a really scary and humbling experience.

The best way I've found is to go by actual swell size on the buoys then it's sort of fact. The biggest we have towed it was a 6.9-meter swell back in February 2014. That morning I had never seen waves move so fast and mountains of water so big, some waves seemed so big with so much more water in them. I'd personally say they were in the 100-foot range. It was a really scary and humbling experience. I think sometimes it has an optimal size and swell direction where the waves are better shape and steeper. Although there's much less water moving, and this is between the 3.5-4.5 -meter mark. Cotton has had a long relationship with Nazaré. Exhibit A, above. - WSL / Vitor Estrelinha

What is the biggest that you have paddled it?
The past year someone has had a dig at paddling during most tow swells, and the bar is being raised every swell for sure. I personally like to choose my times when it's more perfect to paddle, as I like to make the most of the swells and get waves. Again, it's hard to say actual wave heights but I've definitely had a few solid 20-footers out there over the years, maybe a few bigger. 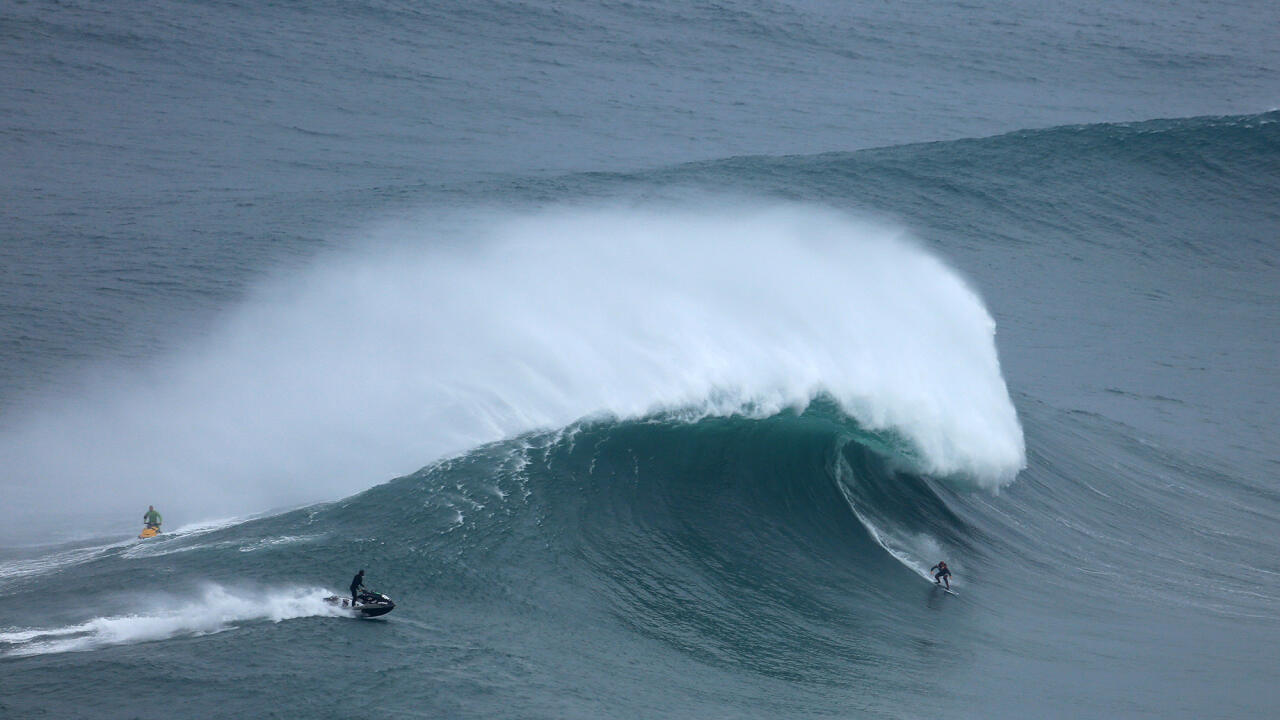 Cotton's been a fixture at Nazaré whenever it's doing its thing. - WSL / Vitor Estrelinha XXL

How big do you think a surfer can push it for it to still be paddle-able?
It's happening now. [Surfers] are paddling now for waves that what only a couple years ago we thought were only towable. Safety vests and equipment has helped this a lot as well as having ski support. At Nazaré, where there's no real defined spot or peak, having the ski support for rescues, and even helping you get back out to the lineup is a necessity. It would be really tough and dangerous to think about paddling those giant days without a ski in the water.

At Nazaré where there's no real defined spot or peak, having the ski support for rescues, and even helping you get back out to the lineup is a necessity. It would be really tough and dangerous to think about paddling those giant days without a ski in the water.

What, for you, is the scariest thing about Nazaré?
Driving the ski! Sometimes the inside can be so gnarly with no channel, these weird sideways waves, and loads of foam washing around that driving the ski, doing rescues, and retrieving boards can be the most scary moments for sure. I don't like going in there unless I really have to.

What is the worst-case scenario out there?
I think for me the worst-case scenario would be losing the ski on a rescue on the first peak on a giant day. There is just so much water moving, and the currents are so random, you never know which way you'll go. Then there's a huge possibility you could just get smashed into the cliff. It's not the place you just want to be swimming around without a board.

Cotton, in His Second Home
Nazaré has become like a second home for Cotton and his family. With performances like this, it's easy to see why.

What are your personal feelings about surfing in an event in possibly the biggest waves for a surf contest ever?
To be honest, I can't believe I made it as a contest wildcard. I'm so stoked. Nazaré is a very special place for me, and although I'm not a local, everyone in the town has always been so welcoming to my family and I. It has almost become a second home. It's going to be a very exciting day and although I feel confident that I know the line up well, I also know that the north beach is the boss and if it's not your day it's just not your day.

But I've got a couple really good boards which I feel confident on and I have my game plan so can't wait for the event. Looking forward to seeing the world's best big-wave surfers in one of the world's biggest beachbreaks.

The Big Wave Tour's Northern Hemisphere season runs from October 15, 2016 - February 28, 2017. The Nazaré Challenge could run anytime within that window if conditions allow.