"I just kept thinking, ‘As long as I'm on the inside slot at least I'll get a good wave and won't make too much of a fool of myself,'" remembers Joel Parkinson, of his first-ever WSL Championship Tour (CT) competition at Jeffreys Bay.

It was 1999, and the Australian had arrived at Jeffreys as an 18-year-old. On the back of a glittering junior career and his undoubted raw talent, he'd been given a wildcard into the event by his sponsor. "I thought I was going to be murdered when I surfed against the CT guys," he recalls. "But I remember watching that first day going, 'Oh, okay, so that's that guy. He doesn't look quite as good as he did in the movie.' I kept on thinking I was going to lose that contest. I surfed stupid and it kinda worked." 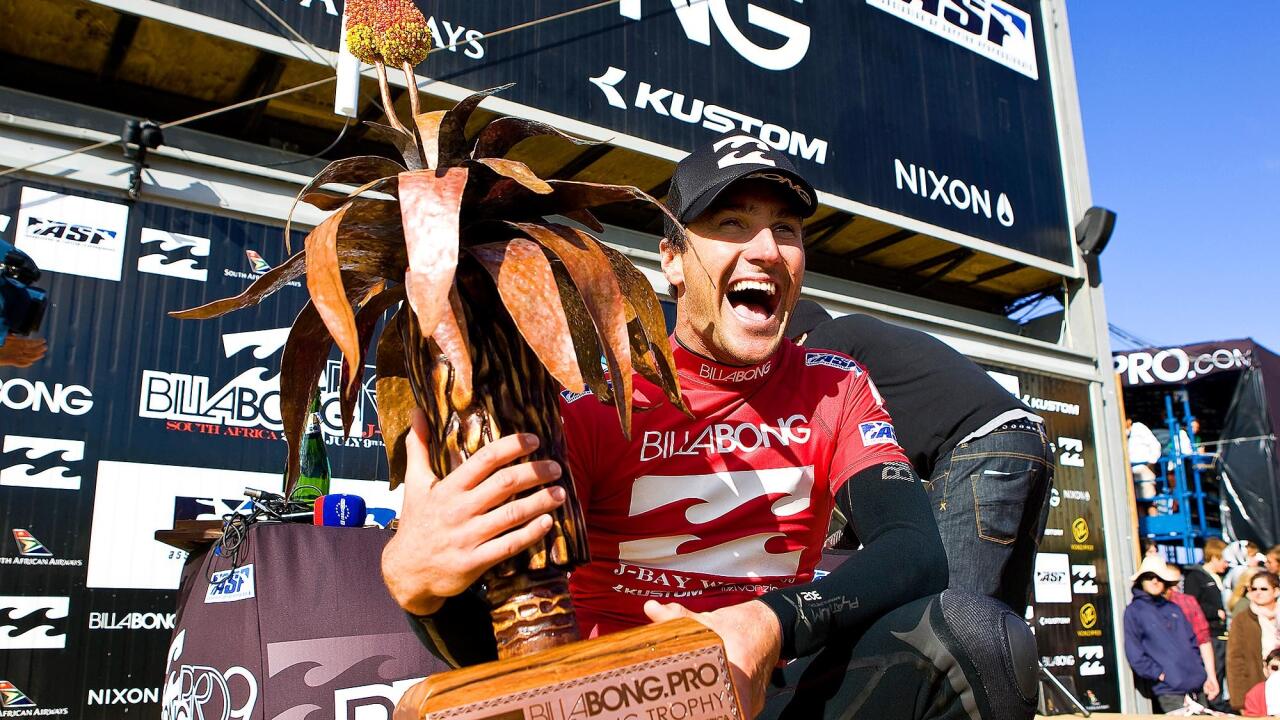 The expression "kinda worked" is a slight understatement. Parkinson won the event, defeating Ross Williams in the Final, and alerted the world to the incredible potential he would eventually fulfill. It was also the first, and last, time anyone has ever mentioned surfing stupid, Parko and J-Bay in the same sentence. In the intervening two decades Parkinson has formed a special relationship with the wave. He secured another victory in 2009, made the Final as recently as 2014, has scored four perfect, 10-point rides and set a benchmark for combining power and style at the famous wave. In doing so his approach has inspired many other surfers at the South African pointbreak.

A Perfect 10 in 2014
Joel Parkinson nabs a 10-point ride in the J-Bay Semifinals, with two tubes along the way.

"J-Bay and Parko was absolutely beautiful to watch," Jordy Smith told the WSL, when he recalled seeing Parkinson earn that famous first victory. "It was like, ‘Wow, that's who I want to surf like out there.'"

Men's CT rookie Griffin Colapinto is a more recent acolyte, being on record as saying Parko is his favorite surfer. Mick Fanning, the man who beat Parkinson in that Final in 2014, has no question over his place in the pantheon. "He's easily one of the best ever at J-Bay," Fanning said. "He just in sync out there. He tends to catch the best waves and his surfing suits it perfectly. It's a beautiful thing to see."

Parkinson's Influence On Jordy Smith.
0:48
The South African talks about his first time watching Parko surf Jeffreys Bay, and the immediate impact it had on his surfing.

Parkinson's history, connection and aesthetics at Jeffreys Bay are therefore unquestionable. Yet distilling that magic into solid results at the Corona Open J-Bay -- which, this year kicks off Monday, July 2 -- have proved more difficult in recent years. Since that runner-up finish in 2014 he has failed to get past Round 3 in each subsequent year. That matches his record in 2018 which, coupled with his absence from the 2018 Oi Rio Pro, means he enters the Corona Open J-Bay as the World No. 28, his lowest-ever seed for the competition. "It's still one of my most special events," Parkinson says. "I've won there a couple of times and I still get jittery feelings whenever I think about surfing Supertubes. It's one of those waves that once you get it down, you never forget. You are able read each wave well and surf it well. Hopefully that means I can do well this year."

One of the oldest clichés in sport is that form is temporary, but class is permanent. It's a claim that is indisputable when it comes to Parkinson at J-Bay. Given his two-decade relationship with the wave and the event, recent history is almost irrelevant. Yet, he is 37, and while he has no made announcements on any retirement plans, it's entirely possible that this could be his last competitive appearance at Jeffreys Bay. Mick and Joel all smiles after their Final in 2014. - WSL / Kirstin Scholtz

Watching Joel surf J-Bay has always been, as Smith and Fanning said, a beautiful thing to witness. If this is the last chance to do so, this is the time to make the most of it.

Watch Parko and the rest of the CT men compete at the Corona Open J-Bay live daily on Facebook from July 2 - 13.