All dreams start somewhere. For competitive surfers looking to win a World Title, it all begins at the Pro Junior level. Claiming a Regional Title is a massive stepping stone.

Tyler Gunter and Kirra Pinkerton have done just that and clinched the North America Regional Pro Junior Titles in Dedication to Zander Venezia after their respective results at the RVCA Pro Junior presented by Jack's Surfboards and Banzai Bowls. It grants them a top seed at the esteemed World Junior Championship event where they can then vie for a World Title of their own.

Kirra Pinkerton's Near-Perfect Season Puts Her at the Top The next generation is arriving fast, and Pinkerton is among the forefront. - WSL / Sean Rowland

Pinkerton began 2018 with a bang, garnering her second WSL win and didn't relinquish the No. 1 spot at any point.The 15-year-old earned a victory at the Ron Jon Roxy Pro Junior over reigning North America Regional Champion Alyssa Spencer and set the pace for this season. But, the San Clemente, California, native was just getting started and then went on to claim back-to-back wins after taking down her first Los Cabos Open of Surf title -- the first competitor to win two events during one season in North America since former Championship Tour (CT) competitor Chelsea Tuach in 2015.

"It feels so good to win it, it's almost unbelievable," Pinkerton said. "This means a lot, knowing that I can achieve my goals and that they aren't just dreams. It helps me gain confidence that I need if I want to surf in the CT someday, and accomplishing these goals will help me reach my biggest dreams." Despite missing the Final at the Vans US Open of Surfing and showing her first sign of slowing down, it was a momentous week for Pinkerton making her CT debut after securing the trials win. The opportunity showcased Pinkerton's talents as a competitor worth really taking note of as she battled with the world's best and a preview of what to expect from the young Californian in years to come.

"I think this year I've had the experience from the years before, and it has helped me gain strength and knowledge of what I need to know going into my heats and what I need to do to win those heats," Pinkerton added. "It was so amazing to surf against the people I've looked up to my whole life at the US Open. It was beyond any experience I've had before and one of my long-term goals is to make it to the CT. I'm hoping I can make it to that position and surf against Lakey and Stephanie again over the next few years and learn from them." All the pressure is off Pinkerton heading into the Live Like Zander Junior Pro if she is to go try and defend her event title there as the new Regional Champion, but her sights are already beginning to turn toward 2019 and what lies ahead. Pinkerton's win looked inevitable after claiming the Los Cabos Open of Surf victory, however, the men's race to the Regional Title was far more tooth and nail. Five events have crowned five different event champions, but it was Gunter who earned three Finals appearances this season and a RVCA Pro Junior win solidified him as 2018 North America Regional Pro Junior Champion in his last season as a junior. Zippers turned on bigger than ever and Gunter nearly captilized on conditions he typically thrives in. - WSL / Andrew Nichols

"I was already stoked to just to win the contest, but then was told I needed a photo with the regional trophy and just couldn't believe it," Gunter said. "It was so unexpected. I knew I was ahead going to Barbados, but to do it at home was just a dream come true. It hadn't really sunk in until Monday when I was sitting at home and realized, 'Wow, I did two of my goals in one day' after wanting to win the RVCA Pro Junior so badly all year.

The 18-year-old began his campaign with a runner-up at the Ron Jon Quiksilver Pro Junior, his fourth straight Finals appearance, but fell just shy of a fifth in Los Cabos -- earning a Semifinal result. 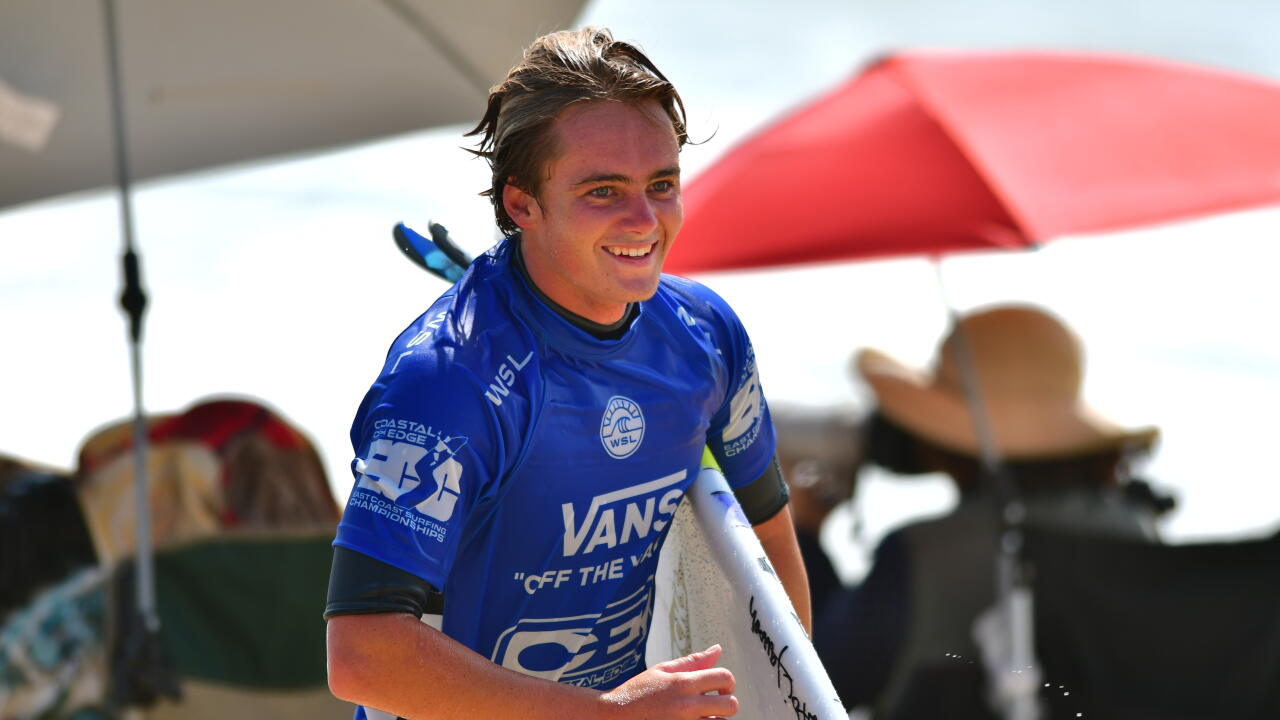 Gunter was all smiles from the very start on Vans Pro finals day. - WSL / John Ferguson

Huntington Beach awaited Gunter for a shot at his first Vans US Open Final shot, but the Newport Beach, California, native endured one his career-worst results and finished with an equal 25th. Gunter then showed his grit and determination to return with a vengeance and delivered a remarkable performance at the Vans Pro and Pro Junior, making both Finals and earning his second runner-up of the season that shot him into the No. 1 spot.

Gunter: I went from second to fifth after the US Open and was really pissed off going to Virginia Beach.

"A big difference from this year to last year was wanting to win the event once I got into the Finals and not just being stoked on making it there," Gunter added. "This year I learned I can believe a lot in myself and if I'm 100 percent focused, and everything's going right, then I can make heats with some of the top guys. I gained a lot of confidence from this year and the Vans Pro in particular. I went to bed knowing I'll be surfing a lot of heats the next day and if I could just make it to the round before Quarterfinals in the QS I'd be stoked, but that was unbelievable. Things happen for a reason and I think that loss at the US Open really opened my mind because I was really pissed off going in there and just put everything into it."

But, the young Californian wasn't done yet and went on to make his dream of winning a second RVCA Pro Junior title at his home break of 56th Street Jetty in Newport Beach a reality - securing the Regional Title and a second shot at the World Junior Championship before embarking on a Qualifying Series (QS) career. "My next goal is still to finish in the Top 150 of the QS this year and I'm at 115 right now so hopefully that can happen," Gunter continued. "Knowing I can make as many heats as I did in Virginia Beach at the QS level against that caliber of surfers gave me that confidence to want to do even better now. We still have Costa Rica, Pismo, and Barbados for the QS events so if I can get a big result at one of those I'd be so happy. I'm really looking forward to Soup Bowl and surfing that event in Zander's (Venezia) honor one last time."

The final three World Junior Championship qualification spots for the men, and final spot for the women, will be determined at the Live Like Zander Junior Pro In Memory of Zander Venezia November 6 - 11 at Soup Bowl, Bathsheba, Barbados.