Ramzi Boukhiam was victorious over Weslley Dantas by a final score of 14.40 to 11.23 to take home the World Surf League (WSL) QS5000 Oi Hang Loose Pro Contest pres. by Eletron Energy at Cacimba do Padre in Fernando de Noronha, Brazil. The Moroccan was consistent throughout the week and was in complete sync with the waves on Finals Day, which included a Semifinals win over former event winner Jadson Andre. With today's win, Boukhiam has jumped from 163rd to number 2 on the Qualifying Series rankings behind Wiggolly Dantas, who took the rankings lead with his Semifinals finish today. 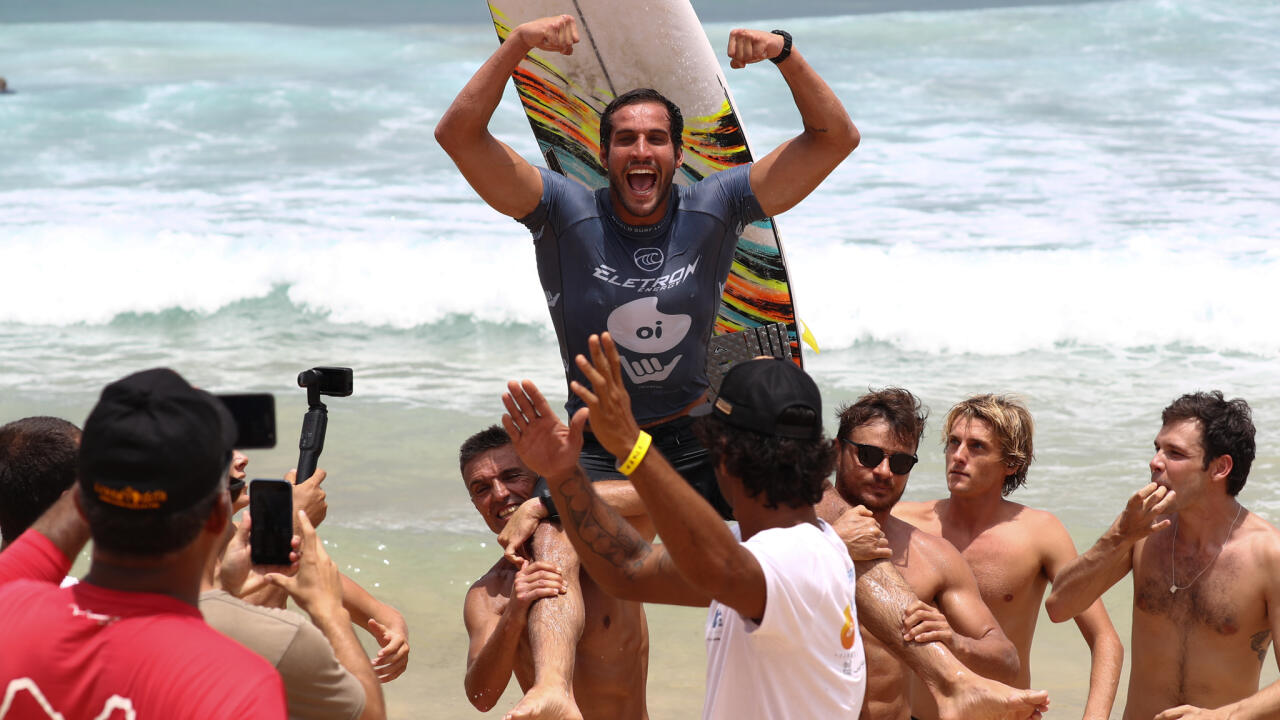 "I'm super happy with this result today," said Boukhiam. "Weslley (Dantas) and Jadson (Andre) are extremely tough competitors and great all-around surfers. So, I just tried to focus on myself and surf to my strengths and use powerful turns. It seemed like everything went my way today. I caught the best waves and took advantage of every opportunity."

Boukhiam also reflected on his career up-to-date and his intentions for 2020.

"Beginning the year with a victory at a QS5000 really gives me a boost for qualification onto the CT and I'm going to give it my best effort this year. I've been on the QS for a long time and I know I've made mistakes in the past. I know what I need to do and even though things might not always go your way, I think I have what it takes to be on the CT. We've got the Olympics coming up, I've got a great coach and it just feels like things are moving in the right direction for me this year." Runner-up Dantas was impressive all week long at Cacimba do Padre, putting together a full array of surfing and superb technique including tuberides, powerful carves and tweaked out airs. In addition to earning 4,000 QS ranking points, Weslley also took home bragging rights by defeating his older brother, Wiggolly, in the Semifinals.

"I feel good, my head is in the right place and I believe that I only lost the Final because I didn't find any good waves, because I feel like my surfing has been good all event long," said Dantas. "It's all part of God's plan, second place is a great result to start the year and now I'm headed to Australia psyched and ready to go."

After his first event of the year, Dantas sits at #10 on the QS rankings. "To be honest, I never really think about the rankings," continued Dantas. "Your position changes a lot during the year and the only one that really counts is where you are after Sunset in Hawaii. There are a bunch of Challenger Series events this year, I feel like I surfed really well here in Noronha and I look forward to a great 2020."

Weslley's brother, Wiggolly, has also had a great start to his 2020 campaign, taking first place at the Volcom Pipe Pro earlier this month and has backed it up with a 3rd place result at the Oi Hang Loose Pro to take the Qualifying Series rankings lead. He now has a full head of steam as he looks to get back on to the Championship Tour. "It was an incredible feeling to surf against my brother, the waves were a little slow during our heat, but he got the best two waves and deserved making it to the Final," said Wiggolly. "I think we both surfed well during this event, I'm super proud of him and hopefully we can both make it to the CT this year. This year is a bit more challenging since neither of us has a major sponsor, so I think with the results we've had so far, it's a good opportunity for us to get picked up."

Last year's event winner, Andre, was one of the standout surfers of the event, but came up short to an in-form Boukhiam in the Semifinals. "Sometimes things just don't go your way. I maybe ended up forcing it a little too much against Ramzi (Boukhiam), and he was on all the best waves in our heat," said Andre. "I'm a little upset for not making it to the Finals, but I'm still pleased with my performance, it's still a great result to start the year and look forward to getting the CT started in Australia."

A wild day of competition witnessed former and current CT elite fall while emerging threats made their presence known in Huntington Beach.