When swell makes it way to Cocoa Beach, Florida's, Shepard Park surfers relish and opening day at the Ron Jon Quiksilver Pro unfolded to that tune. Familiar faces decimated the Shepard Park lineup with a few international talents emerging as threats to those looking to gain valuable points near home. The Ron Jon Quiksilver Junior Pro and Roxy Junior Pro were called off for the day with a likely start Friday, March 13.

Back-to-Back for Brasil? Edgard Groggia Puts His Name in the Hat 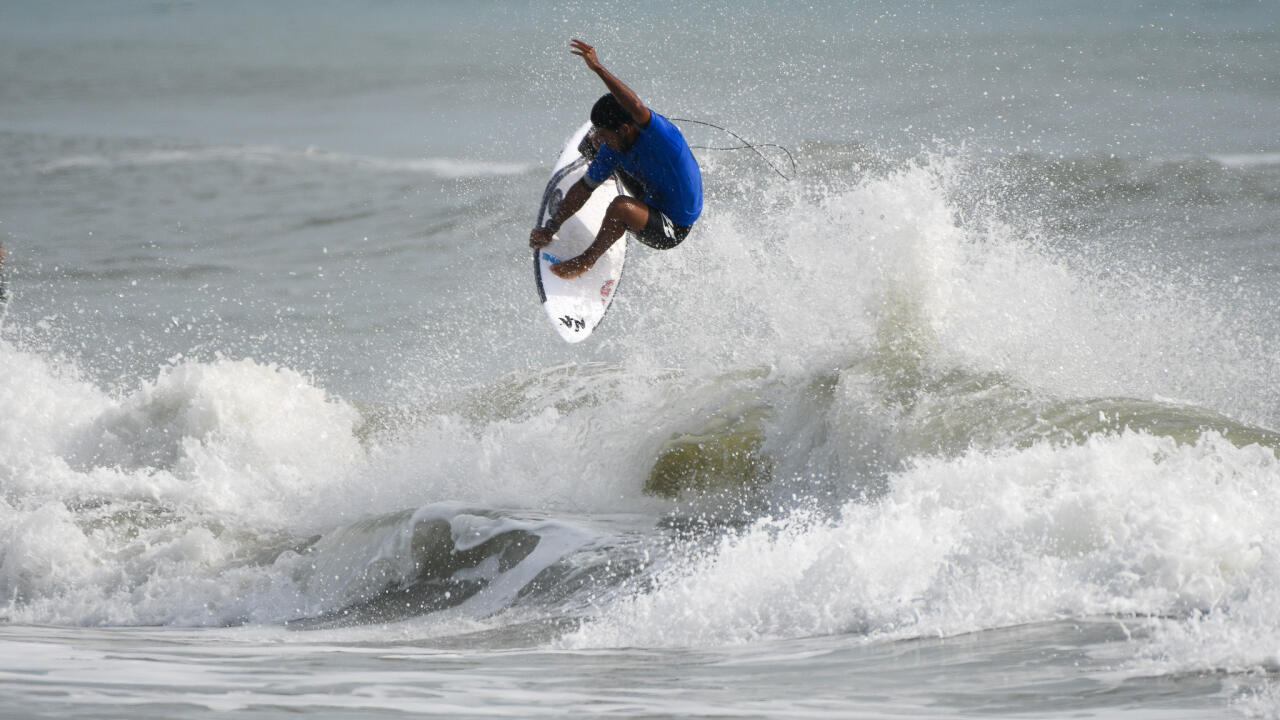 Groggia's ability to make something from nothing proved the difference maker. - WSL / John Ferguson

A massive performance from Brasil's Groggia topped off a marathon day of action as afternoon conditions began to deteriorate but didn't stop him from posting a near-perfect 9.00 (out of a possible 10) and 17.00 (out of a possible 20) heat total. This marks Groggia's second-ever QS event after contesting in Fernando de Noronha earlier this year and looks to make a big impression for his hometown of Santos, Brasil, while also putting the field on notice with that performance toward backing up Matheus Navarro's win in 2019.

"The waves were so fun today, it was just tough in the afternoon but I've been working really hard to get ready for this year," said Groggia. "My goal is to make the Top 100 by the mid-year cutoff so I can get into the big events and I've put in a lot of training to make my goals happen. I've got a magic board and hopefully I can keep up the momentum." 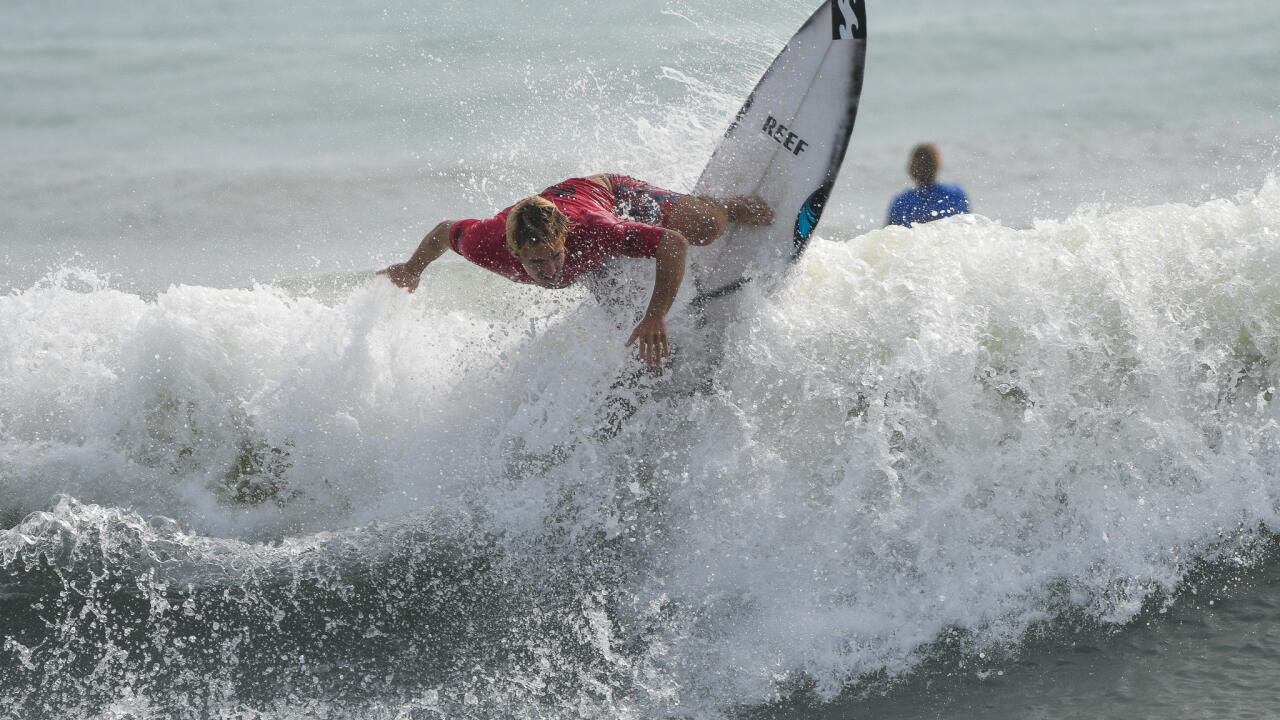 It's only been a year away from Cocoa Beach for Burke and he showed he hasn't lost his touch. - WSL / John Ferguson

Former event victor Burke returns to Cocoa Beach after a mix bag of results in Australia and looks to find his winning form once more after his long-awaited victory at the Thomo QS 1,000 In Memory of Bill Thomson on home soil in Barbados. The 22-year-old Barbadian knows the lay of the land here all too well and showed that experience with an impeccable 14.17 (out of a possible 20) heat total - including an excellent 8.00 (out of a possible 10) with local Round 1 standout Logan Hayes advancing into Round 3 as well.

"It feels good to start with that with that 8.00 and got lucky going into that heat just wanting waves to come to me and they did so I'm happy," said Burke. "I'm here to win this event after that Australian leg. It's an event you have to win to make it count in terms of points and money. Florida has always been good to me in terms of results and I hope the waves keep coming to me. I know what I'm capable of and if waves keep showing up in my heat I know I can win this event." Cocoa Beach native Hedleston found himself in one of the standout heats from day one featuring fellow Floridian, now San Clemente, California, resident Giorgio Gomez, notable aerial specialist Jacob Szekely and an in-form Kyan Yang. A back and forth battle ensued with Hedleston on the outside looking in with Gomez and Yang holding onto advancing positions before the birthday boy, Hedleston, found a 7.83 to catapult into the lead where he would remain. The now 16-year-old showed his dynamic surfing with both backhand and forehand attacks to represent strong for his hometown crowd.

"Until I got that 7.83 it was weird, I just kept finding low scores and those guys rip so it was a tough one," said Hedleston. "Giorgio (Gomez) is gnarly and Jacob (Szekely) is mental in the air then Kyan (Yang) is someone I surf with when I go to Huntington Beach at Nationals and stuff so I know what he's capable of. It just took getting the right waves with the first two sets being a bit mushy but the third stands up really nice and that's when I got that 7. I typically surf up or down the beach because the sand is always moving here so it's good to get through that heat at this sandbar."

Fellow Floridians holding it down on home soil included big heat Round 2 heat wins from Robbie McCormick, who continues his early Round success at this event and looks for more, A big performance from San Diego, California's, Levi Slawson showed the 17-year-old hasn't lost his flair despite an overall slump in 2019 on his first full charge of the Pro Junior circuit. Slawson dropped the day's highest total of a 14.84 utilizing his quick and light approach to critical sections and made his intentions clear from the start.

"You just had to be so quick and keep your speed up to get through the lip of the wave to release the fins and try not to go out the back of the wave," said Slawson. "Last year I felt like I had a few weird heats and it was my first go doing all the Pro Junior events which didn't really work out for me. This year I'm looking to put some scores up and make a name for myself. There's still some really good guys in it and at all these events so I really want to try and break through." The international field in attendance delivered a few hefty upsets as the Caribbean's Thomas Ledee helped eliminate local event threat Ryan Huckabee and California's Max Beach. But it was Costa Rica's Jairo Perez who took the heat win and brought his radiating positivity to a place he finds the comfort of home. The competitive veteran has his eyes set toward bigger ambitions on the horizon but continues to enjoy the moment.

"That last wave was a blessing and I'm just so stoked," said Perez. "Cocoa Beach is like my second home. My brother has been living here for 17 years and I'm always coming to see him and getting used to the waves here. The wind came up and got a little chilly but I think it's getting warmer this week so I'll be happy to be in boardshorts (laughs). I'm working on getting my business set up hopefully by the end of this year and start looking at doing that instead of competing within the next few years so it's all good things." Fellow Costa Rican Tomas King approaches this season with a fresh outlook after past seasons of grinding over the past few seasons, finding some success in 2018.

"I haven't done any QS events this year and just staying closer to home doing some Pro Am events," said King. "I'm stoked though, the waves are really fun and I wasn't expecting much here so that was great. This year I'm just feeling happy and have a different mindset this year, more relaxed, and just want to surf my best."

Brasilian threat Alex Lima, Japan's Roi Kanazawa and Keanu Kamiyama, Argentina's Jose Gundesen add their names to the list of international contenders on hand to contest for the 2020 event win.

Event organizers will reconvene at 7:30am EDT for a possible 8:00am EDT start.

The Floridian teenager went ballistic to take down a stacked Round 2 heat and advance into Round 3.

One of Cocoa Beach's own and fellow Floridians head into big Semifinal draws with some of the region's best.