Earlier this year, photographer Zak Noyle worked with a group of friends to create a non-profit known as Every1ne Hawaii. Initially, the idea was to build a local organization that would encourage voter turnout in a state that regularly experiences some of the lowest voter participation in America. But when the COVID-19 pandemic took over every aspect of life for people around the world, the group turned its attention to finding ways to help Hawaiians navigate the new crisis.

Among the multitude of problems Hawaii faced, the group identified access to personal protection equipment (PPEs) for the average citizen as a challenge the organization could tackle. In particular, Hawaii was in need of a massive infusion of protective face masks, especially knowing it would soon become mandatory to wear one in public.

"We were able to see very early on that masks were going to be an issue," Noyle says. "We looked at Asian cultures and saw that large-scale mask usage was important in the countries that had been successful in curbing the spread of the virus."

"You go into the stores out here and you can't even find toilet paper," Jamie O'Brien says of the access to essential items around Hawaii. "Imagine trying to find a mask?"

Every1ne Hawaii started out by ordering around 100,000 masks. But then it was a grass roots effort: professional surfers like Carissa Moore, Zeke Lau, O'Brien, Makua Rothman, Seth Moniz, Ian Walsh, and Kai Lenny pitched in. The non-profit teamed with the City of Honolulu and state government (chartering private shipments with the help of Hawaiian Airlines). Suddenly the effort turned into the delivery and distribution of two million masks in Hawaii, all purchased with individual and private donations to the group. 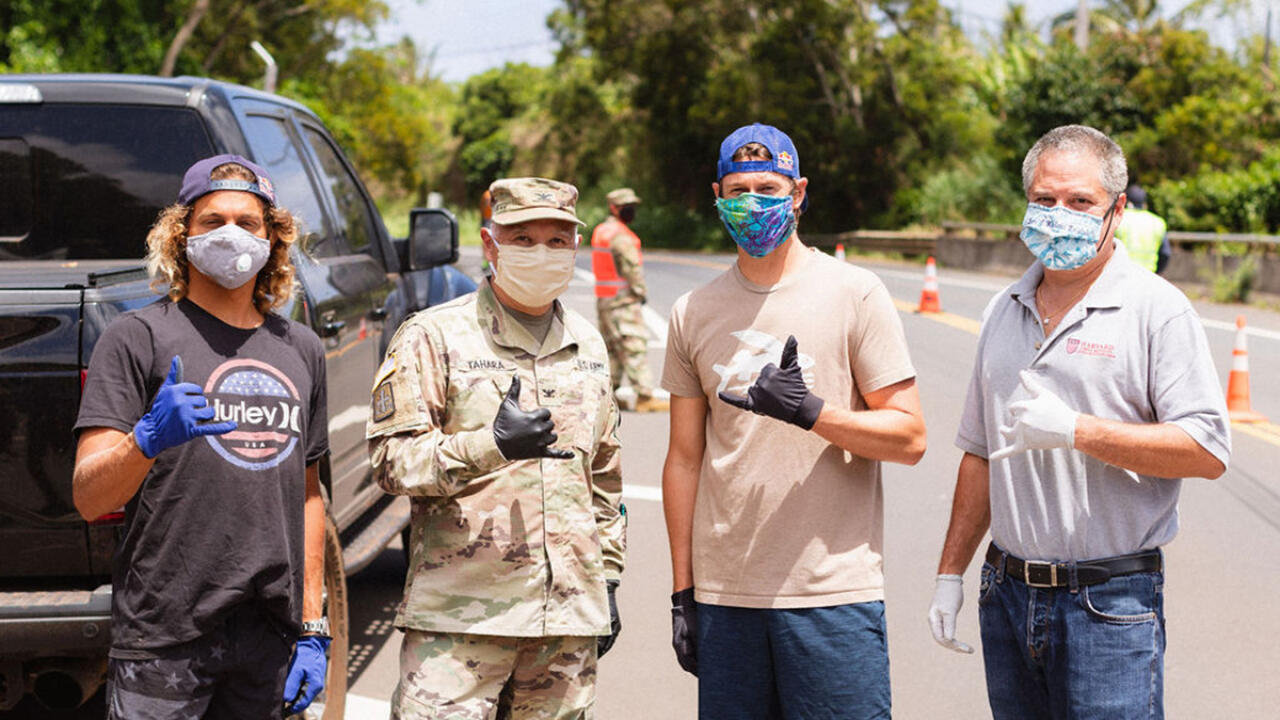 "When we found out there was an opportunity in China to buy two million masks, we wanted to play catch up in short order because we knew if we waited any longer there was a good chance we might miss the opportunity," Noyle says. One of the largest shipments arrived on Oahu the day it became state mandate to wear one.

Of course, all two million PPEs didn't go out in one fell swoop. On May 5th, for example, O'Brien and Noyle volunteered to hand out masks on the North Shore's Kahuku Hospital, where O'Brien says people would drive up, get their masks and sanitizer, and be out in under a minute.

Carissa Moore spoke at a press conference announcing the purchase of the protective gear alongside the CEO of Hawaiian Airlines one day, the next she was holding a sign on the side of a road letting people know they could pull over and pick them up. Lenny and Walsh brought approximately 200,000 from Oahu to Maui, and along with the National Guard, distributed them on the island. In all, Noyle estimates giving out as many as 7,000 masks at some events.

"It's been awesome that so many surfers came to us and wanted to be involved," he says. "It's inspiring to see people using their voices to get these masks out to their communities…We have the masks pre-packaged in sets of five and have a very stringent protocol for how they're passed out. It's such a wild world we live in now - we're worried about how we're passing out these masks to people. Especially in Hawaiian culture where our society is set up with hugs and kisses on the cheeks."