Daniella Rosas (PER) and Edgard Groggia (BRA) have won the Corona Open Salinas Surf City presented by Hyundai All-New Tucson 2022 after providing compelling performances in rippable conditions at Playa de la FAE, on the Santa Elena Peninsula in Salinas, Ecuador. Rosas brought some extra joy to the Ecuadorian fans after defeating Julia Duarte (BRA) in the Semifinals, which guaranteed that Dominc Barona (ECU) would retain the last spot on the Challenger Series via the WSL Latin America regional qualifiers. In the Final, Rosas came out victorious over Summer Macedo (BRA), who has now chosen to represent Brazil at all World Surf League events. In the Men's Final, Groggia landed a series of huge airs to overcome the current WSL Latin America Regional Champion, João Chianca (BRA), who is currently dating Macedo, the daughter of a Brazilian artist residing in Hawaii.

"I'm so happy right now. I want to thank everyone here on the beach and I'm still a little speechless to describe what I'm feeling," said Edgard Groggia. "The heat with João Chumbinho (Chianca) was super hard. He's incredibly talented, so I knew I would have to surf my best and thankfully the right wave came and I was lucky enough to land that big air. At the last event in Montañita, I lost the Final to Lucca Messinas, but I felt like I performed well. Here I was more focused on my qualification to the Challenger Series, so in this Final, when I realized I had a chance to clinch and win the event, I did my best on every wave and thankfully everything came out perfectly." The Men's Final was a veritable airshow with the two Brazilians putting on an elite-level performance on the punchy righthanders at Playa de la FAE. After a runner-up result against Lucca Mesinas (PER) at the Corona Open Montañita Surf City, Groggia wanted the assure his qualification to the Challenger Series by beginning the heat with a big air he was unable to complete. On the other hand, Chianca chose to attack the start of the Final with two strong, frontside hacks to earn an 8.50 from the judges.

Undaunted, Groggia continued to hack away at Chianca's lead by landing an air-reverse which rendered a 7.00 and followed with another air on a successive wave for a 7.30, closing the gap to 14.50 to 14.30 in Chianca's favor. Needing 7.21 in the final 10 minutes, Groggia knew he needed to do something big. After scratching in to a decent sized righthander, Groggia sped down the line and launched a massive alley-oop, landed with cat-like reflexes and celebrated by pounding his chest with both fists. As anticipation built while the judges deliberated, the entire beach erupted as the announcer relayed the score of a near-perfect 9.50, giving him a lead he would not relinquish. Chianca was unable to regain the lead and Groggia celebrated his first World Surf League victory by a score of 16.80 to 14.50 respectively. 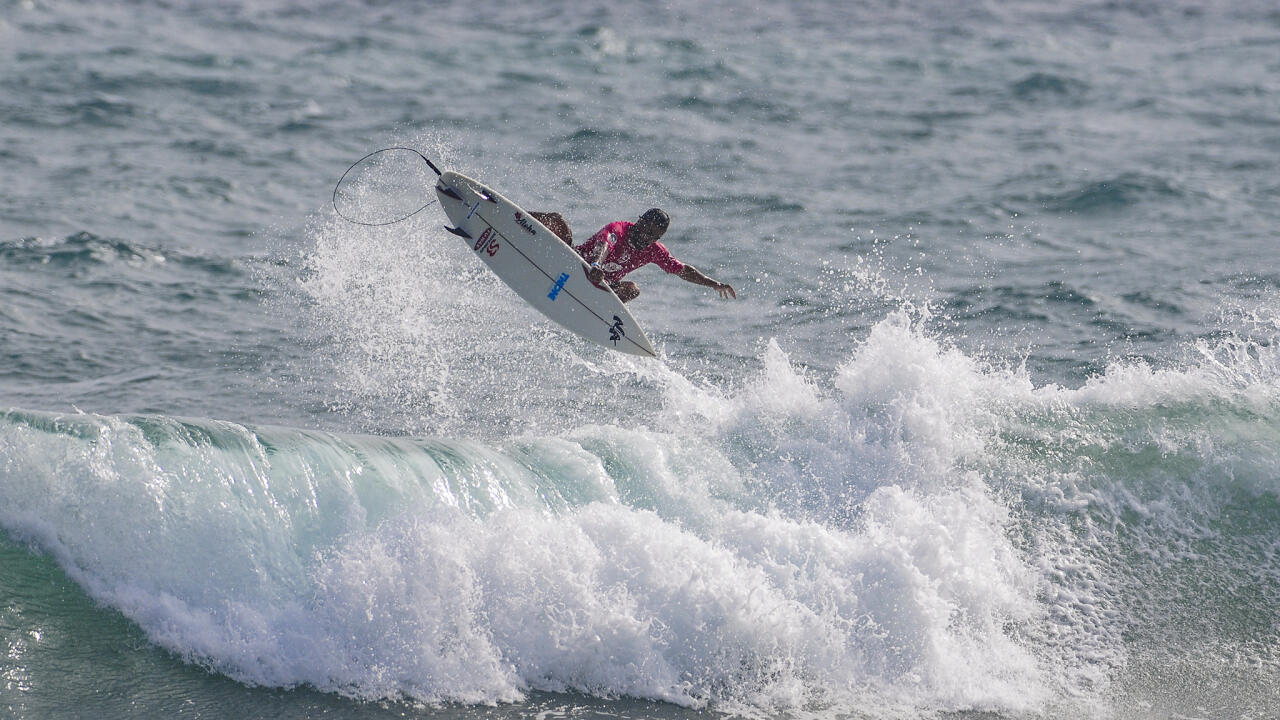 "I am really happy for everything that is happening. I came here focused on getting a spot on the Challenger Series. That was my main goal and I knew I had the talent get there," said Edgard Groggia, who only recently began competing in World Surf League events in 2020. "I loved everything about Ecuador. I felt that I had an edge surfing at the two righthanders in Montañita and here, so I tried to make the most of it to get good results. Getting the win here in Salinas and a second-place result in Montañita will stay in my thoughts for a very long time and I want to thank everyone who has helped and supported me. Now I'm going to train even harder and prepare myself to represent my country and all of South America in the Challenger Series," completed Groggia.

CHALLENGER SERIES - With his victory at the Corona Open Salinas Surf City, Edgard Groggia moved up two more positions on the WSL Latin America regional rankings jumping from 11th to 9th. The current WSL Latin America Regional Champion, João Chianca, remained in 6th position. The remaining regional athletes that have qualified for the Challenger Series are Alonso Correa (PER), Marco Giorgi (URY) and six Brazilians, Wiggolly Dantas, Ian Gouveia, Thiago Camarão, Weslley Dantas, Samuel Pupo and Rafael Teixeira. The Challenger Series events will take place in the second half of 2021 and will determine the twelve surfers that will compete as part of the World Surf League Championship Tour in 2022. "I want to thank all the people here in Ecuador and I've had a lot of fun here, especially since the crew of Brazilians are so united," said João Chianca from the Winner's Podium at Playa de la FAE, in Salinas. "I'm super stoked, and not only for myself, but for Marquinhos (Marcos Correa), for Leo (Casal), for Ed (Edgard Groggia), who are all great surfers and are very talented. I also want to give a shout-out to all my sponsors, my family, my brother (WSL Big Wave surfer Lucas "Chumbo" Chianca), all my friends and a special thanks to Ecuador."

The Men's Winner's Podium consisted of all-Brazilian athletes with Groggia defeating his good friend and teammate, Marcos Correa (BRA) in the Semifinals, while Chianca overcame the event's dark horse, 17-year-old Leo Casal (BRA) who impressed the judging panel by executing explosive backhand maneuvers on the punchy rights in Salinas.

BRAZILIAN STORM REINFORCEMENT - Summer Macedo (BRA), who was born in Hawaii, but has a Brazilian father, has made an immediate impact on the WSL Latin America circuit after announcing her decision to represent Brazil at World Surf League events. After being defeated by Silvana Lima (BRA) in the Final at the Corona Open Montañita Surf City, Macedo looked to improve her result with a victory in Salinas. The two contests in Ecuador are the first events that Macedo has chosen to represent her father's native country. Moving forward, Macedo will now compete as a Brazilian and has already started well, with two Finals appearances in a row using the green and yellow flag on her shoulder. "I'm very happy to have reached the Finals of both events here in Ecuador", said Macedo, who is currently dating the Men's Finalist João Chianca. "I wanted to do one better here and win the event, but I know I'll have other opportunities in the future. Now I'm going to focus on my training, prepare myself for the next QS events and other contests in Brazil," stated the newest member of the Brazilian Storm.

WOMEN'S FINAL - In the Women's Final, conditions improved greatly from earlier in the day with both Finalists attacking the righthanders on their frontside at Playa de la FAE. Rosas began with a 5-point ride, but Macedo quickly followed with a 6.00. They lead kept switching back and forth until the Peruvian racked up a 7.00 and a 5.75 on two consecutive waves.

Rosas took advantage of the priority situation and chose a solid right, which yielded a combination of three big, powerful turns to earn an 8.00 from the judges, leaving Macedo needing a 9.00 with five minutes remaining. As the clock ticked down, the opportunity never came and Rosas celebrated her second WSL Qualifying Series victory by a score of 15.00 to 10.65. Her first win was in Argentina in 2019, the year she also won the WSL Latin America regional title. "I came in very aware of what I had to do," said Daniella Rosas, who will represent Peru at the Tokyo 2020 Olympic Games in Japan. "I knew Summer would get good scores because she is an elite competitor. I've seen her compete for a long time, so I knew it was going to be difficult, but I hit the water frothing, I chose the right board and made it my goal to win this contest. It's an honor to be here representing Peru and it's amazing to win another QS event. Now I'm going to go back home and train really hard in the upcoming weeks for the Olympics. This is my goal for the year."

CHALLENGER SERIES REGIONAL ATHLETES - Daniella Rosas is the current WSL Latin America Regional Champion and leads the current regional rankings which determines the five surfers that qualify for the Challenger Series (CS) events scheduled for the second semester of 2021. Before clinching her second WSL Qualifying Series victory, Rosas confirmed the last spot of the CS qualifiers for local surfer Dominic Barona (ECU), with a victory over Julia Duarte (BRA) in the Semifinals.

This was the second special gift Rosas gave to her good friend Barona. Rosas also guaranteed the Ecuadorian's spot in the Tokyo Olympic Games. The Peruvian had already classified for having won the Pan-American Games in Lima in 2019, defeating Dominic Barona in the Final. However, three weeks ago, Rosas double-qualified at the ISA Surfing Games in El Salvador, leaving the Pan-American spot to Barona. The two will be together in Japan and the Challenger Series events as well later in the year. The other Women's WSL Latin America athletes that will compete in the Challenger Seried via the regional rankings are: Silvana Lima (BRA), who will also be in the Olympics, Sol Aguirre (PER), and Josefina Ané (ARG). The first event of the 2021 Challenger Series will be the US Open of Surfing, scheduled for August 2 - 8 in Huntington Beach, California.