The start of the 2015 Samsung Galaxy Championship Tour is just around the corner, with the Quiksilver Pro and the Roxy Pro set to kick off the season at the Gold Coast. But with a few weeks to spare, surfers focused on the here and now, socially. Here were the hot topics from the past week. 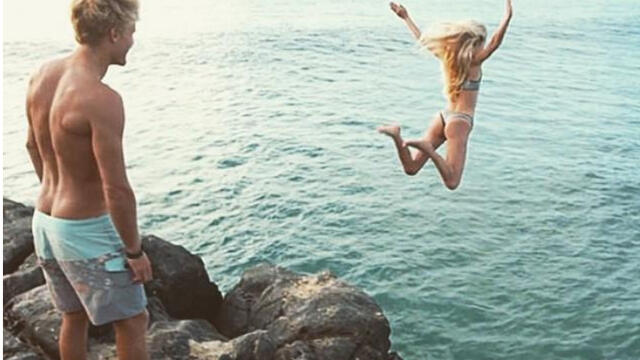 Happy anniversary to you my love @hanaleireponty. You know you've got a special lady when she lets you chase waves on your anniversary and Valentine's Day! - Instagram / Patrick Gudauskas - WSL

Love is in the air and surfers are already sharing their Hallmark moments. Cooper Chapman, Sally Fitzgibbons and Patrick Gudauskas (pictured) all sent out good vibes to family, friends and significant others. If you're not into the mushy stuff, getting in the water and off the web was a good bet for V-Day.

Images surfaced this week of a surf comp in Ashdad, Israel, that went down in the dark. Nearly 40 Israelis took to the Mediterranean Sea after sundown February 4 with only the floodlights and the moon guiding their way. The event takes place annually at Gil Beach and, judging by the photos alone, it's a unique event. She wasn't showing then, but Bethany Hamilton surfed the Women's Pipe Invitational with a baby on board, so to speak. - WSL / KC

Good wishes abounded for Bethany Hamilton (HAW) this week. The Hawaiian inspiration turned the big two-five February 8 and then posted this video on Twitter announcing that she is pregnant. Just back from their appearance on CBS's Amazing Race, Hamilton and husband Adam Dirks are on to their next adventure, with a baby boy due in early June. If you do the math, that means Hamilton was pregnant when she took third place at the Women's Pipe Invitational in December!