Fourteen surfers came to Lemoore to chase a dream, and now only four remain. For those remaining contestants, it's now or never, as at the end of this final episode, we're all about to find out exactly who the Ultimate Surfers really are.

It's Zeke, Koa, Brianna and Tia who remain, and they all desperately want to win, but only one man and one woman is going to be leaving The Ranch with three wildcard entries to World Surf League Championship Tour events, as well as $100,000 cash to fund the ride. Only four surfers remain competiting for the title of The Ultimate Surfer, an $100,000 prize, and the chance to compete on the Championship Tour. - WSL / ABC

"I've been dedicating myself to my goal of becoming a professional surfer since I was five years old," Koa says, already imagining himself putting on a CT jersey for his first heat in the big leagues.

But Koa will need to get through Zeke first, through. Throughout the competition Zeke has been the one to beat, calmly taking down everyone who stood between him and his goal of rejoining the Championship Tour.

"I want to win a World Title one day, and winning The Ultimate Surfer will help me get there," says Zeke.

Surfing on the Championship Tour is a lifelong dream for all four of these contestants, and they've never been so close to making it come true.

"I'm really excited to go against my bestie, we're going to push each other so hard -- bring it on, Tia," says Brianna.

But before the final challenges can begin, it's time for one last message from eleven-time World Champion Kelly Slater. Since it's such a special occasion though, he's decided that rather than phone in via ‘Kelly Vision' he'd show up to the Ranch in person. 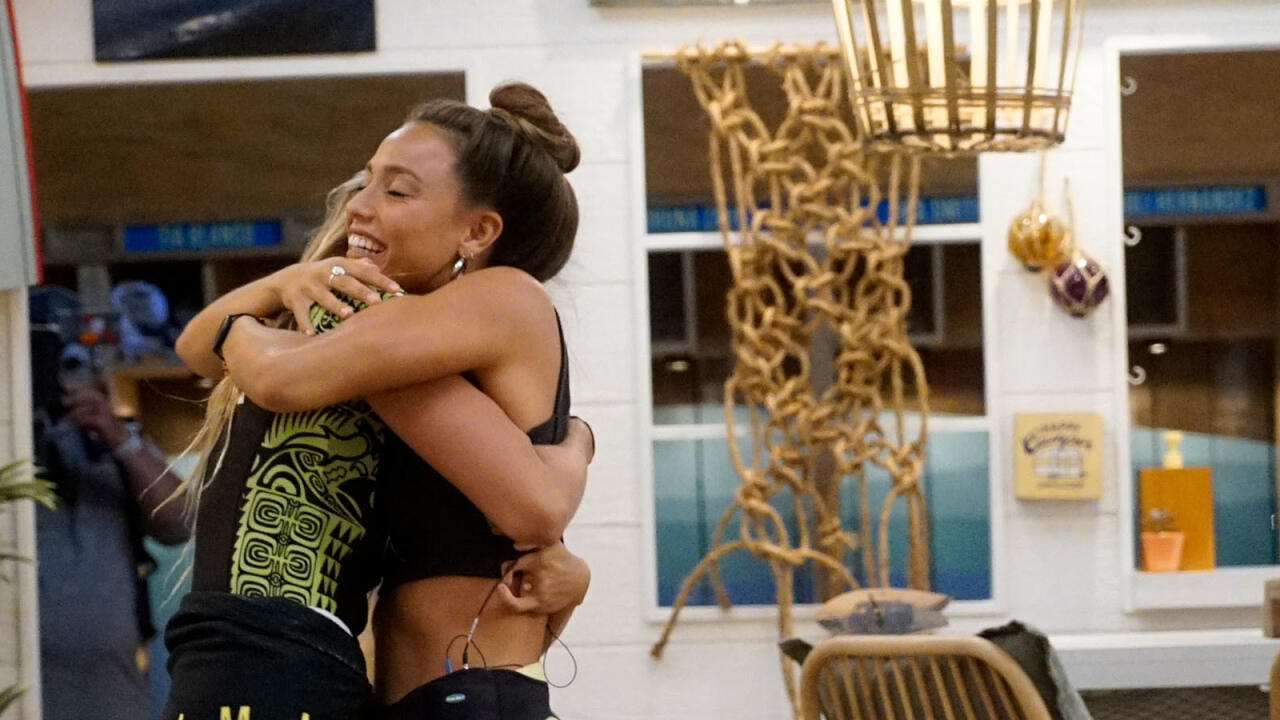 The final two women's surfers as well as best friends, Tia Blanco and Briana Cope, hug it out before they compete in the finals. - WSL / ABC

Kelly -- the real fresh-and-blood version -- lets them know that the final Surf Off will be about putting together everything they have learned, and that he's going to come for a surf with everyone before it all kicks off. This is a once-in-a-lifetime experience for these guys, getting in-water perspective from the greatest surfer of all time, in the magic man-made wave he created. The fun and games can't last forever, though. After Kelly says goodbye it's time for the last Beach Battle. Everyone is bundled into an SUV driven by host Jesse Palmer and blindfolded.

Except it turns out the fun and games can continue. Jesse ramps the anxiety through the roof, allowing the squad to think they're being trucked to an intense, ultra-crucial Beach Battle. But it's a wild goose chase. Turns out they end up right back at the Ranch for a spa day, aimed at helping them relax before the final Surf Off. Koa Smith and Zeke Lau close their eyes for an ice bath before the finals. - WSL / ABC

The Ultimate Surf Off

Things have to get real eventually, though, as it all comes down to this -- there's one huge step remaining for the final contestants. Here's how the Ultimate Surf Off will work: Each surfer gets three waves, with only their highest scoring wave counting. The man and the woman with the highest score, will be named The Ultimate Surfer.

Just weeks ago there were fourteen elite surfers vying for the title, and now it's down to four who will all be putting their wildest dream on the line. Brianna and Tia are up first. Brianna puts everything into her first ride, but falls right at the end. Tia gets off to an unbelievable start but gets outpaced by the barrel and falls. Tia Blanco with a front side turn during The Ultimate Surf Off, showing her style and grace on the wave after much time practicing. - WSL / ABC

Then it's time for Koa and Zeke's first waves. Zeke's been the alpha since day one, but it's time for him to deliver now. There's only one surfer between him and his dream of getting back on the Championship Tour, and Koa Smith isn't going to make it easy for him.

Zeke delivers, with a solid 8.00 score on his first wave, setting a high bar for Koa, who falls in the barrel on his first ride. He's going to need to do a lot better than that if he wants to take down Zeke.

Brianna overtakes Tia with her second wave, but Tia is fired up -- she's got the wave dialed, and earns a 9.5 on her second run with the best barrel ride she's had at the Surf Ranch.

Zeke falls on his second run -- it's the first time we've seen a true mistake from the most consistent male competitor. This is Koa's chance -- he needs to strike. It's now or never. He gets barreled and launches a big air reverse. Zeke Lau has been the strongest compeitor throughout competition and is looking ready as ever to take a spot once again on the World Championship Tour. - WSL / ABC

It all comes down to the final waves. Brianna is in the lead as she takes her final opportunity. She completes her ride, taking some big chances. It's now make or break for Tia, and she knows it.

Zeke is first of the men to ride his last wave at The Ranch. It's aggressive, controlled, and he finishes the wave with a big air -- this is the ride of his life. Koa also puts it all into his final ride, making it extraordinarily close between all the competitors.

With everyone turning in their best waves when it counted the most, it's hard to say there were actual losers. But only one man and one woman can be declared The Ultimate Surfer, winning three Wildcard spots on the WSL Championship Tour, and $100,000 cash prize.

Those two champions are Tia Blanco, with a 9.8 score, and Zeke Lau, who scored a perfect 10 -- the first time a perfect ten has been awarded at The Ranch. They have made their dream come true, and will be competing on the Championship Tour soon.

"I just feel like I'm on the right path, and nothing can beat this feeling," says Lau.