Toledo Wows Crowd in Final
Typically known for his airs, Toledo's surfing showcased power-carves and snaps on the Gold Coast.

Toledo was noticeably confident throughout the entire event, earning five 9-point rides and a perfect 10 for his final wave of the contest.

"The only thing I do is have fun," Toledo said. "It's one of the most important things! [I'm] really excited to wear the yellow jersey, but I'm not nervous, just really happy. I'm excited to surf Bells and the rest of the events! I'm gonna battle hard for first place! Focus, and of course connect with my family and God."

Toledo displayed a level of consistency in radical maneuvers at the Gold Coast event, leaving the surf world wondering exactly what magical equipment was under his feet.

"I've been working on my boards with Marcio Zouvi and [Sharp Eye team manager] Yufu Penrose in the last few months to create my model the Holy Toledo," he said. "[The Holy Toledo] was working good, but not good as my 5'9 round OK model."

Marcio Zouvi, Toledo's shaper, discussed the young Brazilian's board of choice and what it's like to shape for current CT World No. 1. 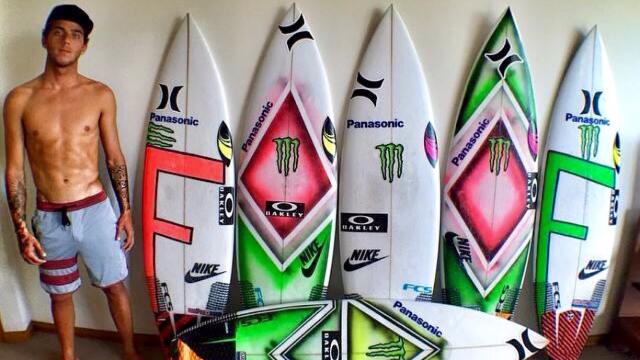 Toledo had many options, but found magic second from the right. - WSL

World Surf League: Tell us about your relationship with Toledo, does he provide a lot of feedback?
Marcio Zouvi: Filipe moved to San Clemente, California last year and that made it a lot easier for me. I usually go see him surf and try the boards whenever I have the time. Our team manager also lives in San Clemente and he helps a lot with the feedback when I can't be present. Filipe is pretty good about describing how his boards are performing.

WSL: What was he was riding when he won?
MZ: He was on the OK model with a pulled-in round squash. I used Arctic Foam Orange and some extended carbon on the deck.

WSL: His board looked lightning-fast under his feet. What about the design made it work so well in the small conditions during the Gold Coast contest?
MZ: Filipe had a good chance to try all his boards during the lay days and I was a bit surprised when he picked the OK model to ride in the contest. I had made four OK models aiming for Bells and Margaret's. I was sure he was going to ride the Holy Toledo [his signature model] at Snapper. I saw footage of him riding it here in small Lowers and the board was flying. He decided to ride the OK after a few days of freesurfing and feeling that the board was really fast, even on the smaller stuff. The OK has a lot of rocker and a deep single concave with a fairly narrow tail. He blew my mind the way he was riding it at Snapper.

WSL: What are the biggest challenges in shaping for Filipe?
MZ: I have to say I've been lucky. He liked at least three of my existing designs. That made all the work a lot easier. I just had to adjust the dimensions and make some fine-tuning to have exactly what he wanted.

WSL: What are the greatest joys about shaping for him?
MZ: Filipe is a great guy. He comes from a good family and he is full of hopes and dreams. It is great to see how good he is doing and how far he will go.

WSL: Do you think anything will change looking toward the next few events, or can we expect to see him riding the same board?
MZ: Every surfer when they're on a winning streak usually doesn't want to change anything. I am sure he will try to see if the winning board will work good at Bells and Margaret's. We'll see.

See more of Toledo's big moves in To The Nines: Gold Coast