The near-term forecast for the men's Drug Aware Margaret River Pro and women's contest is in and it's predicted to be huge when things kick off April 15.

"Considering what we've had to deal with up at the Gold Coast and now at Bells, the forecast for the Margaret River Pro looks enticing," said WSL analyst and Big Wave Tour commissioner Peter Mel. "If you look a the forecast going through, we've got three pulses lined up in the first week of the waiting period. It could be anywhere from 10 feet, maybe even up to 15 to 20 feet."

Swell/Surf Outlook:
Brief Overview: Very solid, back-to-back SW groundswells prevail on Wednesday and Thursday, easing a bit on Friday. Another very strong SSW groundswell looks possible for Saturday, and could be even larger than the surf for Wed/Thur. Morning wind conditions look favorable for the next few days, with some periods of side or onshore flow in the afternoons.

SATURDAY 18th: Good potential for another very solid SSW swell (220-200 degrees) Swell/Surf: Current model guidance indicates that this swell will be as strong, if not stronger, than the swells for Wed/Thur. Stay tuned, this is dependent on storm formation and behavior in the next couple days. Wind/Weather: Moderate E wind in the morning, trending lighter ENE in the afternoon. Stay tuned.

SUNDAY 19th: SSW swell looks likely to drop off through the day. Swell/Surf: At this point it looks like swell/surf will quickly drop through the day, although still be in the well overhead range.
Wind/Weather: Building NNE wind possible. Stay tuned. 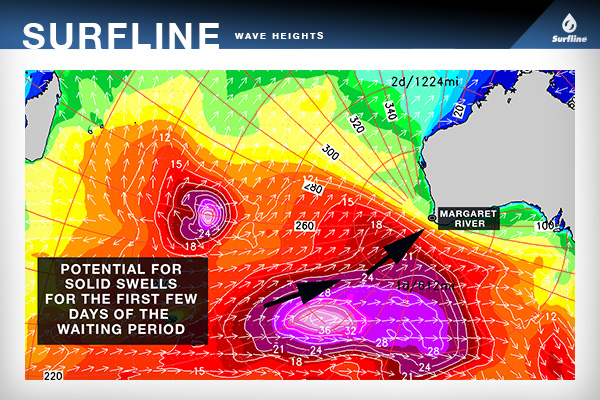 Catch all the action LIVE at worldsurfleague.com from April 15-26, and on the go with the new WSL app.