Sally Fitzgibbons (AUS) finished the 2015 Championship Tour (CT) season at No. 3 the world. It was a year that included an event win in Fiji and a runner-up finish at the final event, the Target Maui Pro, among other great performances. Though she may still be hunting a first World Title, between new boards, an engagement and the launching of the Sally Fitzgibbons Foundation, the standout surfer from Australia has plenty to be excited for heading into 2016. 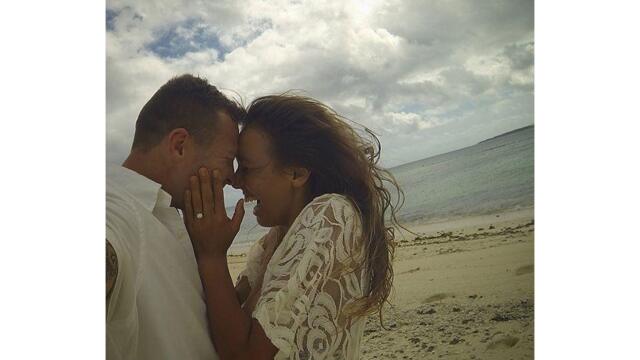 World Surf League: You surfed for Firewire and used their technology for a long time, but you went back to more traditional foam in Maui. What inspired that change?
Sally Fitzgibbons: My contract finished in August with FW and I think it was a successful partnership with a number of Tour wins including an epic one in Fiji this year. I have finished in the top 5 for seven years so I am just looking for those changes that can help get me get that edge I need to claim my maiden World Title.

WSL: What boards did you take to the Target Maui Pro?
Fitzgibbons: I brought over a whole new quiver of JS boards with a variety of profiles ranging from my 5'8" shorties up to 6'6". WSL: There are a lot of talented shapers in Australia, did you try any others or go straight to JS?
Fitzgibbons: I think JS has a great deal of experience and an amazing team of riders. I had noticed a significant improvement in Jeremy (Flores), Julian (Wilson) and Owe's (Owen Wright equipment this year which motivated me to gravitate toward his shapes when I came off contract.

WSL: What about his approach gave you confidence for Hawaii specifically?
Fitzgibbons: Having Dusty Payne as a JS team rider gave me a little added confidence for the stop at Maui as he has grown up here and is now perfecting profiles with JS. I know JS is excited by a challenge, just like me, and we want to keep working hard to find that perfect shape for my surfing.

WSL: Did you consider working with Pyzel on polyurethane boards?
Fitzgibbons: Pyzel has some really great shapes and I was able to benefit from his work while with Firewire. Moving forward I was really keen to work with a shaper closer to home and have a really hands on approach in learning all I can about my equipment and what changes I need to make.

WSL: Are you signing with JS for next season or just testing out a different approach for Hawaii specifically?
Fitzgibbons: At this stage we will refine the designs over summer and see what the new year brings. It's been an awesome challenge for JS to nail this quiver for the Target Maui Pro in such a short time.

Fitzgibbons' Wild Ride Through 2015
18:46
World No. 3 Sally Fitzgibbons talks about her busy year, in and out of elite Tour competition at the Target Maui Pro.

WSL: The Sally Fitzgibbons foundation -- can you expand more specifically on what programs/resources the foundation will offer to help combat childhood obesity?
Fitzgibbons: I launched the Sally Fitzgibbons Foundation on the 18th of December in Martin Place, Sydney with a number of my amazing partners. It is a celebration of being active and all things Health and Fitness. The Premier of NSW Mike Baird [was at the launch] to participate in the activities which revolve around Active and Healthy living. It is my hope to work with the government on school programs that will help curb the obesity epidemic which is affecting our children. Getting out and being active with kids and having a lot of fun will be the most rewarding thing for me.

WSL: Where did your roots in living a healthy lifestyle came from?
Fitzgibbons: From a young age I wanted to be an Olympic Gold Medalist or a World Champion and it just made sense that I needed to put the best into my body to get the best out of it. Once you start making healthy choices every day it becomes your philosophy and outlook on life to be the best you. Feeling amazingly energetic and living life to the fullest should be an obvious choice not one you have to work at.

Fiztgibbons' Fitness Pays Off in Maui
2:06
Sally Fiztgibbons' passion for fitness has kept her on the elite women's Tour for over half a decade.

WSL: To what/who do you owe your passion for fitness and health?
Fitzgibbons: My upbringing and amazing coastal area lent itself to being outdoors and being active. I have three older brothers and my parents encouraged us to be involved in sports and enjoy the ocean. When I decided to pursue this dream of mine, where I grew up was just picturesque to train in, I absolutely loved it. I am not sure how we got to point where being active, healthy and looking after yourself became the minority. It should be what everyone looks to do and create their best selves.

- WSL
Tuesday, April 27, 2021
Sally Fitzgibbons On Her Constant Title Chase, Surfing The Box And Why She Can't Stop Running

From Title chases, to endurance races, to long-standing endemic support, Fitzgibbons breaks down what Tour life means to her.