After skipping the European leg of the 2015 Championship Tour (CT) to be there for the birth of his first child, Taj Burrow (AUS) got back in the jersey to wrap up the season at the Billabong Pipe Masters. With his new family in tow, Burrow talked about what it's like to be back and how Arabella Rose is changing how he looks at competition, life on the road and career goals. Taj Burrow, smooth and focused as ever, back in the jersey for the Billabong Pipe Masters. - WSL / Laurent Masurel

Daniel Jenks: What's it like returning to competition being a dad?
Taj Burrow: I couldn't be happier, to be honest. I truly am the happiest I've ever been. I don't know what I did before I had a kid. It's the coolest thing ever. Every dad tells me and then to experience it, it's next level.

It was the best day of my life and every day since has just been the best. I feel great in the water. The Pipe Masters was the first contest I've surfed since I've been a dad and I just [felt] relaxed. It kind of brings things into perspective like everyone says and I just feel like there's not a worry in the world.

DJ: Have your goals for next season changed now that you have a kid?
TB: It does. I'm hungry. I feel like I've seen a lot of dads really come to life and get their best results in their career when they become new parents. So I'm going to run off that. I feel it's going to help me for sure.

You know, that time I had off was probably two and half months, and even that doesn't sound long to the average person. That's the longest break I've ever had in probably 22 years. My whole life really since I started competing. I've never had that long at home ever. Since I was a teenager. It was such a good break and I feel like I'm ready to go again. 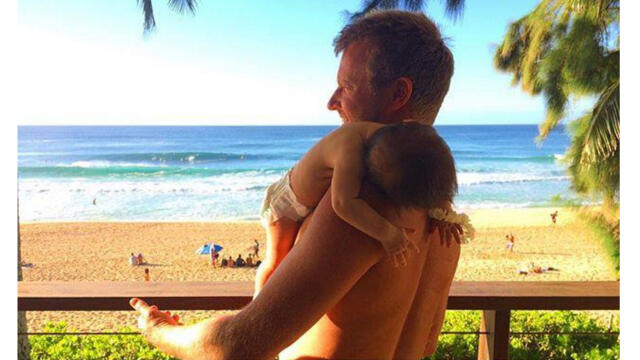 Burrow posted this photo with baby Arabella at Pipe on Instagram with the caption: Little Hawaiian koala bear is loving this glorious run of waves and weather - WSL

DJ: Your newborn and your partner Rebecca Jobson were here in Hawaii with you. What's it been like traveling with the baby?
TB: We were a little bit scared because she's only two months old. But we have so many friends that have newborns and they gave us so many tips and everyone just told us a few tips. Like feed on takeoff and landing so their ears don't hurt. Little stuff like that, but she went sweet. No problem at all.

DJ: What's it like being at the event with the baby?
TB: It's sick once we're settled. It's unreal. Obviously Billabong really looked after us with a sick house right in front of Pipe. Me and my girl and my baby really landed on our feet. We couldn't be any happier.

DJ: Any big plans for the holidays?
TB: Just enjoy time at home as always. And enjoy our first Christmas with the little bub.

For more insight, check out the feature on Tour dads.