Silveira was the undisputed form surfer of the whole event, netting incredible scores in all conditions, culminating with the only perfect 10 point ride of the event yesterday and another few excellent scores on his way to a World Junior Champion title. The Brazilian completed his campaign with a solid start in the final and stayed very active all throughout the 35-minute bout to eventually claim the win.

Silveira Goes 9 in Quarters
2:35
Lucas Silveira (BRA) reclaims the lead in quarterfinal 4 of the Ericeira World Junior Championships with an exellent 9.20.

"I'm trembling right now, it's been a long two weeks here, a lot of waiting and then finally the waves were firing yesterday and today," an ecstatic Silveira stated. "The final was really slow, I started good and thankfully I finished well too. I've had a crazy event here, my lowest heat was a 15 something it's incredible."

Guadeloupe's Timothee Bisso (GLP), 18, proved efficient on both the lefts at Praia dos Pescadores and on the long pointbreak rights of Ribeira but couldn't unfortunately match Silveira's incredible momentum in the final and had to settle for second place. The young French surfer will carry much confidence from this event into his upcoming career as a qualifying series competitor. 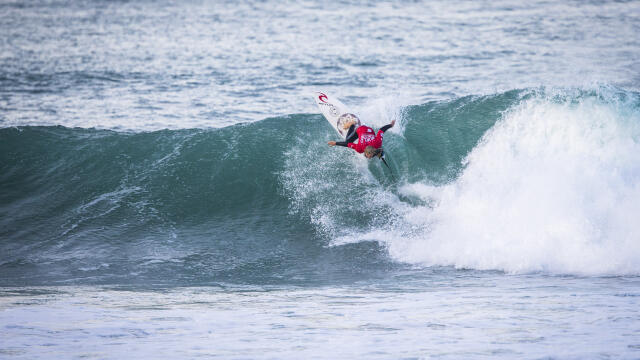 "It's a huge result for me, I'm disappointed I couldn't really surf my best in the final but the waves were tough," Bisso admitted. "It didn't go as planned, but runner-up at the World Juniors is an awesome result. I think I've gained a little respect from the other competitors too and I'm confident to now go travel the QS tour."

Isabella Nichols started building early in her final with an excellent 8.93 to apply pressure on her opponent and quickly backed it up. The young Australian kept building momentum and dropped an incredible 9.37 for her polished aggressive forehand attack on the long Ribeira walls. With a solid 18.30 combined heat total, Nichols' claimed the win over reigning World Junior Champion Maeda.

Nichols' 9 in the final
0:57
Nichols builds on an excellent 8.93 to put her opponent Maeda in combination situation with a 9.37 in the final of the Ericeira World Junior Championships.

"I'm so happy, I don't even know what to say I'm speechless," an emotional Nichols said. "I was lucky to get those two waves, I didn't know what was happening cause we couldn't hear any scores. When I heard I had a good lead I started to calm down a bit and nothing really came through after that. It was the longest heat of my life for sure."

An uncharacteristic slow start left Mahina Maeda (HAW), 17, chasing scores in the final while her opponent kept choosing the right waves in the clean lineup. Despite being one of the strongest surfers all week in Portugal, Maeda couldn't match her rival's rhythm and placed runner-up. Maeda had to settle for runner up this year in Ericeira. - WSL / Damien Poullenot

"It's definitely been a great event, a lot of ups and downs but I've learned a lot," Maeda said. "It's funny every time I'm in a heat with Bella she beats me but I keep on learning from my mistakes. Getting a second place here will definitely make me hungrier for the future and the upcoming season. I love this place, this country and I'll definitely be back next year."

Soli Bailey (AUS), 20, placed equal third, unable to match Bisso's momentum in their semifinal matchup. The talented Byron Bay local took things to the air but struggled with a strong side-offshore wind and despite a great performance, couldn't make it through to the final. Bailey merely missed his spot in the final. - WSL / Poullenot/Aquashot

"I'm definitely happy with a third place here in Ericeira for the World Juniors," Bailey said. "I improved on last year's, unfortunately that was my last opportunity but I'm happy. Wind is turning a little bit onshore now and I can't help but think it could have been to my advantage if I made the heat, to do airs." Fioravanti found his form back in Ericeira. - WSL / Poullenot/Aquashot

Italian phenom Leonardo Fioravanti (ITA), 18, stumbled on an in-form Silveira in the semis and claimed an equal third place as well. Fioravanti, who returns from a serious back injury in early 2015, seemed to have found his form back and will attack the 2016 qualifying series brimming with confidence.

The European Qualifying Series continue with Stop No. 5, the Azores Pro.

Semifinalists are decided in an exciting day of action in Portugal.