Brazilian Carlos Burle is one of the most respected big-wave surfers on the planet. - WSL / Danny Ecker

Last week 49-year-old Carlos Burle charged his way into the final of the Todos Santos Challenge more than 15 years after winning the first Big Wave Tour ever held there. The Brazilian big-wave legend has racked up an incredible resume in the years between, including a 2009 Big Wave World Tour Championship, a 2002 XXL Award, and countless headlining sessions. Carlos stopped by the WSL office on his way back to Brazil and spoke with us about how surfing has shaped his view of life, love, and fear.

AD: You have a history with Todos. What was different his time?
CB: My approach. I have experience now and I'm older and don't have the same energy anymore, so I have to use strategy instead of just going for it. It's a wave that, when it's not the offshore in the morning, the sea breeze comes in and that helps me to get into it. I'm a small surfer, very light, and I don't like offshores.

AD: You said surfing the first-ever Pe'ahi Challenge was among the best moments of your life. What made it so special?
CB: As a professional surfer that has worked his whole life to survive on big-wave surfing -- which is not easy, because we didn't have an any entity support, just a few events here and there -- having Jaws on the tour and being able to participate in the first event there was one of my main dreams in life. It's the most perfect testing ground for the radical, most extreme situations in life.

Burle vs. Pe'ahi
0:29
Despite some heavy hold-downs at Maui's famous break, the Pe'ahi Challenge in December was a dream come true for Burle.

AD: What does Pe'ahi reveal about a surfer's level of stress?
CB: It's funny, I was saying this to my wife last night that I like to be a big-wave surfer because I've gotten to points where I can't control anything anymore, I just control myself. Some people are so scared to think about that. But it's one of the things that I love about being a big-wave surfer, because I get exposure to situations where I cannot do anything, where you have to let it go.

AD: You're also a dad. Which is harder to survive: A big-wave hold-down or having teenager?
CB: Having a teenager.

AD: What was the toughest day of your life?
CB: I haven't been there yet. In October, Burle and his tow-in partner, Maya Gabeira, were getting ready for a big winter season at their warehouse in Nazaré, Portugal. It was the second anniversary of Gabeira surviving a near-death drowning. Describing their relationship, he said, he found in Maya a good chance to change big-wave surfing's image from a sport just related to macho men. - WSL / Kirstin Scholtz

AD: What is a trait that you don't like about yourself?
CB: I compete too much. It's not jealousy, it's a competitive thing that I have to be aware of like, ‘Hey, that's not you. That's your ego.' So I'm watching for that. 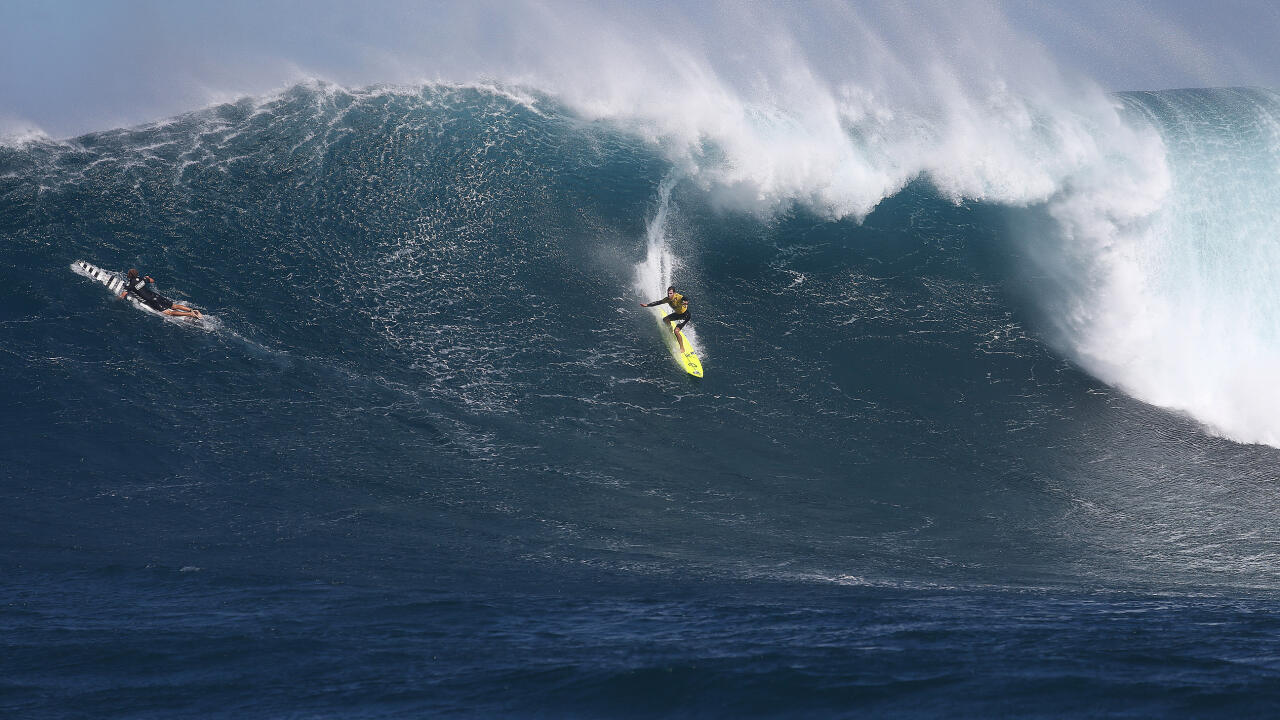 Long before the arrival of the Brazilian Storm, Burle was proudly representing his country in the big-wave arena, working to get big-wave surfing in front of bigger audiences. - WSL / Kelly Cestari

AD: What trait do you least like other people?
CB: Greed.

AD: If you were a song, which one would you be?
CB: There is one song that is amazing, I used to think a lot about my father [when I heard it]. I was under a lot of pressure, and I wanted to be a surfer because surfers represented the other part of society, and I didn't want to be part of the society I knew, I wanted to be free. The name of the song is ‘Free as a Bird,' by the Beatles.

AD: What do you want the most?
CB: I want to cry when I'm happy, like I feel now. When you are stoked, you want to cry. I think that's the most amazing feeling -- my eyes are watering now. I feel blessed that I'm sharing this with you. I feel blessed that I can go places where I can share my life with people and give something back. Being honest with you, being able to share my values with you. For me it's the most important thing in life, not playing games. There is nothing in life that's more important than that.