News of Brock Little's passing spread quickly across social media channels Thursday with tributes from the world's best surfers honoring the fallen the big-wave legend. Little passed away quietly next to family and friends according to Kelly Slater, who wrote on his instagram, "...larger than life to me. The world I know will never be the same. I love you, man." To understand the affection for Little it helps to understand his rise. He burst onto the big-wave scene as a scrawny, scrappy, 17-year-old during the 1987 running of the Eddie Aikau Invitational at Waimea Bay. Technically, he wasn't even in the event when the day began.

But that didn't stop Brock and his buddy Aaron Napoleon from paddling out at dawn to catch a few bombs while officials were making up their mind on whether to run. As judges and organizers were assessing conditions, Little and Napoleon were both spotted charging hard in the early morning session. When they reached the beach officials wisely decided to slide them in as alternates, and they both pounced on the opportunity. Brock ended up finishing in third place, while Napoleon was right behind him in fourth. The two young gun slingers were the talk of the event.

But Little's real impact came in the years that followed. He was was patriarch, professor, and provocateur to a handful of incredible rising talents within the Momentum generation, including Kelly Slater, Shane Dorian and Ross Williams. They were all part of powerful mix of personalities that called Ronald Hill's house home every winter in the late 80s and early 90s. Brock was the oldest. He had the swagger, the toughness, the truck, and the hilarious entourage that included his wise-cracking brother Clark, and the late Todd Chesser, who himself was a standup comic.

Brock and Chesser were a few years older than Kelly and crew, and wouldn't let them forget it. And while hazing rituals varied they were all for the greater good. Brock and Todd pushed and pulled that young crew far outside their comfort zone, laying the foundation for their big-wave accomplishments to come. They were a one-two punch of wit and wisdom at a time when Slater, Dorian, Williams and crew were coming of age. 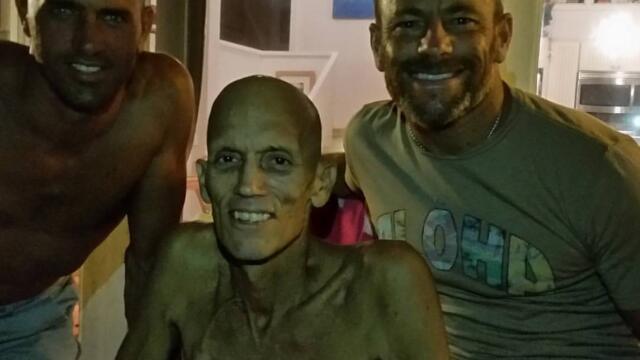 Brock and his buddies, Kelly Slater and Tom Carroll. - WSL

Brock's other impact is largely forgotten today, because these days there are young chargers galore. But in the late 80s big-wave surfing was dominated by seasoned elder statesmen. They were a very serious, and sometimes stodgy bunch. But Little injected a heavy dose of brashness, humor, and cool into their ranks. Sure, he was eventually humbled. His 1990 wipeout at Waimea (see video) is still one of the largest waves ever ridden there. In 1994, he and Mike Parsons were on the wave right behind Mark Foo, who never surfaced after wiping out. Then tragically, in 1997, Todd Chesser drowned while surfing an outside reef west of Waimea Bay. While Little began to parlay his bravery into a Hollywood stuntman career, his faithful students grabbed his big wave torch and continue to carry it well, even into heavy new lineups like Jaws.

Brock Little
0:59
Brock Little burst onto the scene during the1987 Eddie. In 1990, he merely cemented his legacy as one of the best big wave surfers ever.

But Little's affinity for Waimea was as strong as ever. He thoroughly enjoyed watching Slater and Williams get humbled by The Bay during the last big swell in early February. He told Tracks, "Once it gets over 20 foot like it did this week, when someone like Kelly frickin' Slater couldn't even get out there, that's what I'm talking about… you wanna write that wave off, call it easy? You wait till it's over 20, then let's see you out paddle out and look over the ledge… easy my ass."

One of surfing's all-time legends sits down to talk us through the best wave he's ever sent it on at a wave he's spent a lifetime mastering.

List of streaming, social and regional tv networks that will be covering the 2023 Championship Tour