In pumping four-to-five foot waves at Merewether Beach, Australian young guns Ethan Ewing (AUS) and Macy Callaghan (AUS) earned their second Pro Junior wins of the season at the NIB Pro Junior, the first of three World Surf League events being held in as a part of the 2016 Newcastle Surfest. Ewing had an uncharacteristically unsteady start to the final against American Griffin Colapinto (USA) falling on four waves in a row. Colapinto had Ewing chasing two scores to take the lead. Colapinto was in complete control of the heat until Ewing posted two mid-range scores and began to build confidence. He then found a beautiful looking set wave with a clean face that he surfed flawlessly, earning himself a perfect 10-point-ride to take the lead and the event win.

"I was really nervous coming up against Griffin," Ewing said. "The nerves got to me a bit at the start and I kept falling on waves which I wouldn't usually, then luckily I found one that I didn't fall on and got my confidence up to get back in the game. It's been sick to have some swell at this event. This win has given me confidence that I hope to the into the QS6,000 event tomorrow and make some heats." 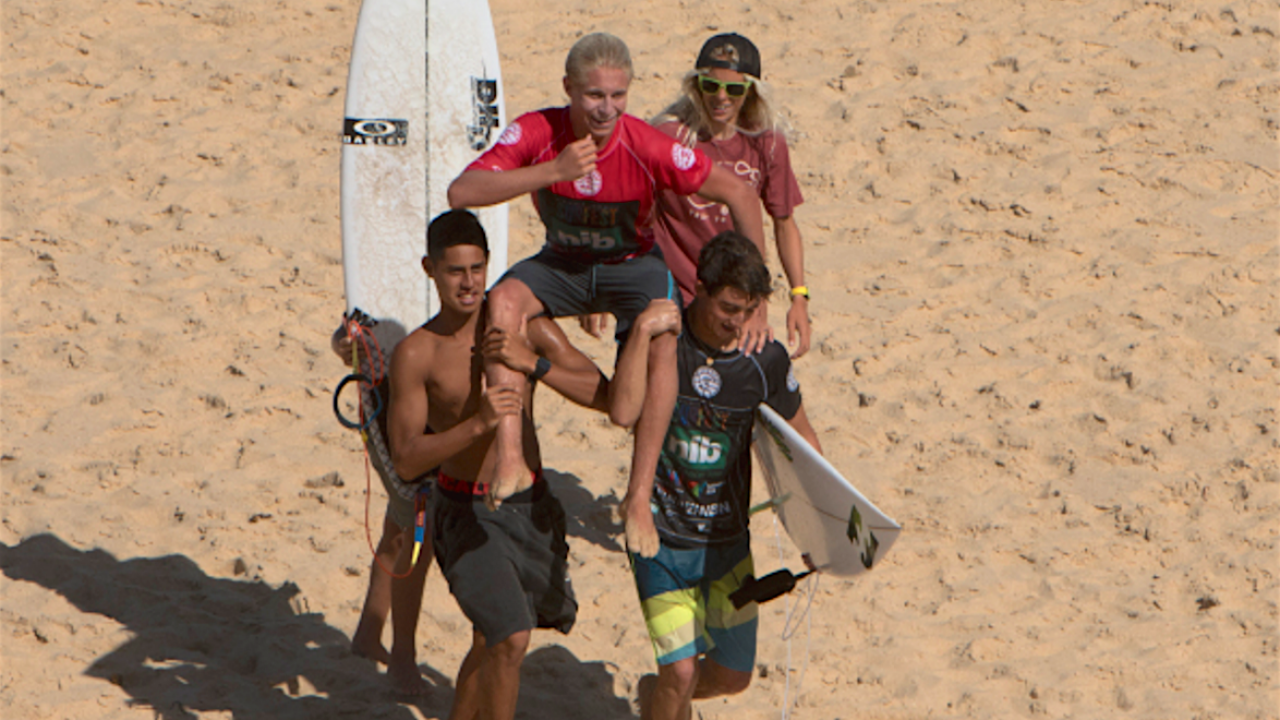 Colapinto surfed an amazing event but was unlucky to come up against an in-form Ewing.

"I couldn't really find the waves I wanted in the Final," Colapinto said. "I'm really stoked to make the Final especially against Ethan, were staying together and are good friends so it was cool to meet in the Final." Coming in as defending champion at the NIB Women's Pro Junior, Callaghan was an absolute standout all event with the Final being no exception. In her second Pro Junior Final of 2016, Callaghan found herself doing battle with Kobie Enright (AUS).

The two went blow-for-blow posting mid-range scores, one after the other. But that changed when Callaghan found a beautiful looking set wave, nailing a massive forehand hack on her first turn, backing it up with two more turns to post an excellent range 8.50. This left her good friend Enright chasing an 8.41 for the remainder of the heat, a feet she was unable to achieve.

"Surfing a Final with my best friend was awesome," Callaghan said. "The waves are really pumping today which was a bit of a surprise after yesterday. I really love coming to Newcastle and competing in this event, I'm so stoked to go back-to-back. Hopefully I can carry this momentum into the Taggart Women's Pro QS6,000 event tomorrow. Macy Callaghan is on a roll - Bennett - WSL / Bennett

Enright, despite coming just short of the win, enjoyed the experience of surfing against her good friend.

"Macy and I have been on the opposite sides of the draw for most contests so have been waiting to surf a Final together," Enright said. "I'm stoked the waves turned on today. Macy was ripping so hard all week so definitely deserved to win."

Surfest will continue tomorrow with the opening Rounds of the first Men's and Women's QS6,000 events of 2016, the Port Stephens and Maitland Toyota Pro and the Taggart Women's Pro which will kick off from 7:30am AEDT and will be webcast live here at www.worldsurfleague.com and the WSL App.

Competitors take to the water in challenging conditions on Day 1 of the NIB Pro Junior conjunction with Surfest Newcastle.