That Winning Feeling
0:42
Defay has consistently shined bright in Fiji, making the quarters in 2014, the semis in 2015, and nabbing the biggest victory of her career on Tuesday.

Johanne Defay will spend the next few weeks buzzing after capturing the second Championship Tour win of her career Tuesday. By eliminating Courtney Conlogue and Carissa Moore, two of the top three surfers on the Jeep Leaderboard, she also jumped into the world title race. She's climbed to World No. 4 after her personal best in Fiji.

Her success in Fiji shouldn't be surprising: The French surfer, now in her third year on the CT, has always done well there. Her comfort in Cloudbreak's heavy lefthanders traces back to her roots at Saint-Leu, a solid lefthander where she earned her heavy-wave stripes.

Defay, at Home in Fiji
0:20
Johanne's comfort in Fiji's open-ocean waves should come as no surprise.

"My dad learned how to surf on Réunion," she said. "I was doing gymnastics but when I was around seven old, my dad said, 'I'm going to bring you surfing.' It started like that, with my local surf club, at my closest beach to home."

Those early days with her dad led to a strong junior career, and eventually the CT. But despite a steadily rising rank, Defay has largely been surfing in the shadows of her celebrity peers. And with her strong French accent, big smile and upbeat demeanor, it's easy to mistake her for an easygoing girl who's happily cruising just below the radar.

Don't be fooled. The 22-year-old has a clear sense of who she is and what she wants -- and she's finally risen up into the spotlight, where she belongs. Here are some of the career moments that have led to her to World No. 4.

Defay cut her teeth on Réunion Island, an isolated paradise that sits in the middle of the Indian Ocean. The French territory is one of the most remote places on earth, and home to incredible waves. It's most renowned break is Saint-Leu, a perfect left that has been a world tour venue. It's where Defay honed her impressive backside attack, and was inspired by local heroes like Flores. After taking note of Defay's talent, Flores has played a role in supporting her career, with some guidance and even financial support her rookie year. When Johanne was dropped by her sponsor at age 18, she considered walking away from pro surfing. A year later, she made the women's Championship Tour. - WSL / Laurent Masurel

Johanne almost quit pro surfing before she even got started. In 2011, she was 18 and at the top of her young game when her sponsor dropped her. With no support and just two years left on the Junior Tour (editor's note: the cutoff age was 20, it is now 18), she went home to Réunion to regroup.

The Defay family is close-knit bunch, and they discussed it together. "I told her that it was not for me to decide for you, you choose what you want to do," recalled Johanne's mother, Josée Géraud. "Don't stop now, that would be stupid. Continue, we'll give you two years more support. We'll help you, and if in two years you haven't qualified you can go to study at university."

I told her, don't stop now. We'll help you, and if in two years you haven't qualified you can go to study at university. - Josée Géraud

Instead of throwing in the towel, Defay soul-searched and worked harder. "I trained more, I asked myself a lot of questions, and I think it made me grow up," she said. "After, when you more what you want to do and throw yourself more into it -- it worked out."

In fact, after returning to the Qualifying Series, Defay climbed the ranks and qualified for the elite CT just one year later. The Fiji Women's Pro was a turning point for Defay during her rookie year in 2014. After a string of 13th-place finishes, she made it to the quarters there and went on to steadily improve for the rest of the season. - WSL / Steve Robertson

In 2014, her rookie year on the Samsung Galaxy Championship Tour, Fiji was a turning point for Johanne. After a string of mediocre, 13th-place finishes she came alive at Cloudbreak, taking on the solid, overhead sets with seeming ease and finished in fifth place.

While her performance was a surprise for some, it shouldn't have been. Growing up on Réunion, Defay is used to open-ocean waves and peeling tubes. That prowess took her to the Quarterfinals in the 2014 event, making it a defining moment not only for her surfing, but also for her perspective.

In Fiji we were all on the island together, eating together, around each other. You could see that the other girls were just normal.

"In Fiji we were all on the island together, eating together, around each other," she said. "You could see that the other girls weren't doing anything different, they were just normal."

That experience was important on a tour where competitors ultimately are on their own. "I didn't have an idea what the tour would be like," Defay said. "But coming here and seeing that everyone had some family, and maybe their teams, we didn't share as much as I had expected. I understand now, when you're in your camp, you don't want to go have a dinner with the other competitors. 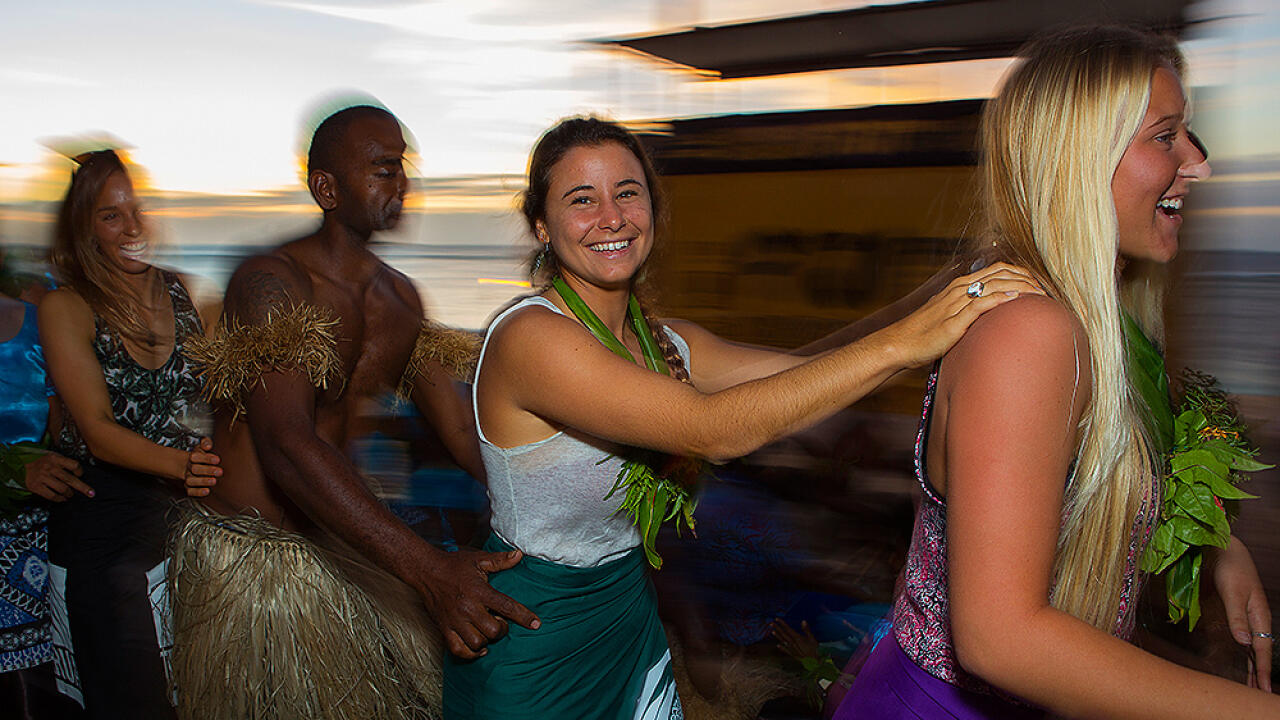 Unlike other stops on tour, in Fiji competitors stay together on Tavarua, a tiny island in the South Pacific. As a rookie, that experience was invaluable as a way to get to know the other athletes -- and take the intimidation factor down a few notches. - WSL / Kirstin

"I understand because I'm the same now. That's why we love Fiji, because we eat together and stay together."

Before her Fiji win, Defay's biggest statement of the season came at the beginning, when she threw a so-called Club Sandwich at the Roxy Pro Gold Coast. "You have to evolve as a surfer to make the judges want to look at you," Defay said later. "If you show the same thing all the time, maybe they get bored." In her third year on Tour, Defay has learned that the other surfers aren't superheroes: A little confidence in heats against goes a long way. - WSL / Kirstin Scholtz

There was some talk that Flores taught her the move. But not so: That was all Johanne, who pleasantly surprised Flores, along with everyone else.

That's not to say, however, that all her success has been solo-driven. "Sometimes when I say I don't have sponsors, people say, ‘Oh, poor Johanne,'" she said. "It's not like that. My family is very supportive, and my boyfriend has been helping, and my coach at home. My boyfriend is my coach now, too." Of Bianca, Johanne says, She's probably the one that understands me the most. Pictured above, besties just after Johanne's win in Fiji. - WSL / Ed Sloane

Now Defay has her routine, her friends, and her mother by her side for most of the year. She has a close bond with Buitendag, which makes a year of traveling the world both more fun, and more comfortable.

"We met before the CT, when we were around 14 years old," said Defay. "We were far away from family. We were in the same hotel rooms, and shared some lonely moments when were younger. She's a simple person, and I really like that. We are honest with each other."

Johanne and Bianca for GoPro
1:31
The friends took fans down the line at Bells this year, in a spot for GoPro.

Maintaining other types of relationships on tour, however, is a little tougher. Defay and her boyfriend are proud new owners of a home together on Réunion Island -- they closed the deal just over a month ago -- but staying in touch on the road is still a challenge. "My relationship with my boyfriend is harder to handle on the road than with family," Defay said. "He has a job at home and can't come with me a lot. It's also hard for us sometimes to separate coaching and personal life.

My relationship with my boyfriend is harder to handle on the road. It's also hard for us sometimes to separate coaching and personal life. But we found a balance together.

"Sometimes I push back against his advice, but as soon as I'm like that he reminds me: We are not in a relationship right now. We are just coach and surfer. He knows me well and when you're on the road, even if he's far away, he'll know how I feel and if I need to do something or not. That's really helping. We found a balance together." Don't let that smile fool you. I like authenticity, and it's important for me to show that, Defay said. It keeps me grounded. And my reality is my family, my boyfriend, and missing my him when I'm away. - WSL / Brett Skinner

More than anything, perhaps, what defines Defay is her strong sense of self and authenticity, whether cameras are rolling or not.

"Being on Tour, you realize that people have opinions about the way you do things, we are very exposed," she said. "I really thought about it. I want to show reality, my world. I don't want to always show the surfer girl in a bikini, always in perfect weather.

Being on the WSL tour has helped me to find who I am. And to say, OK. I'm doing what I'm doing. And people can think whatever they think.

"Being on the WSL tour has helped me to find who I am. But when I was younger, there was a bit more pressure, to look a certain way because you're a surfer, and have a certain image. That had a big influence. And being on tour helped me these two years to say, ‘OK. I'm doing what I'm doing. And people can think whatever they think.'"

Warming Up for Fiji
2:12
Defay's right: Women's surfing isn't all bikinis and sunshine -- except for this past week in Fiji.

"Maybe some of my confidence comes from my mom, she's very simple: She enjoys looking at the trees, or drinking a coffee. My dad also gave me that will for what you want, and my boyfriend is a bit like that. I think having a solid family behind me, that loves you anyway: performing well or not performing well. But I couldn't do it if I didn't have the bigger picture that my surf career is not going to be my whole life."

For now, though, as Defay's star is rising, her driving force is clear. Johanne's path, Josée said, "Is not for her parents, and it's not for the sponsors. It's for her."