John John Florence is sporting a new look in 2016.

Sure, his celebrated cool-as-cucumbers vibe is very much alive, but he's bringing a new tempo, a faster tempo, to waves of consequence (read: his heats), and the quicker pace is matched by a similarly unfamiliar aggression, atypical of low-key Hawaiian. John John Florence looks like a man on a mission this year. - WSL / Kirstin Scholtz

This is a beautiful thing for Florence fans, because it's clear Florence is emotionally invested this year. John John Florence wants a title. He wants one bad. And he's willing to stick his neck out there and risk some emotional pain to get it.

He's made it clear that movies are taking a back seat now. His back, ankles, and knees are all working well at the moment (knock on wood), and his equipment is as dialed as ever. Those factors were all on display at Bells Saturday, where Florence dominated the final heat of Round One over a wobbly Jordy Smith and jittery Jadson Andre. His 8.5 was the best ride of the day, and catapulted him directly into Round Three. Jordy Smith ran into an in-form Florence in Round One, and will now face Adam Melling in Round Two as he looks to regain his momentum. - WSL / Ed Sloane

Joel Parkinson was also among the men's standout performers Saturday. Parko was extremely patient waiting for the rare set waves, which were slow to arrive today, but aesthetically stunning when the did, especially with Parko swooping across the glassy walls. It's easy to see why he's a three-time winner of this event. He won a tough match with Taj and Sebastian Zietz. Joel Parkinson and the Bells bowl are a dream pairing. - WSL

Meanwhile, Nat Young's love affair with Bells is still blossoming. It was love at first sight for these two. Young finished in 2nd here during his rookie year. He backed it up with a 5th in 2014, and a 3rd in 2015. So yeah, Bells is his most productive stop, and yeah, it has plenty to do with the fact that Bells is a chunky cold righthander, much like Nat's Steamer Lane home back in Santa Cruz. Young won a battle of backhanders with Ace Buchan and rookie Ryan Callinan.

Nat Young Right At Home
1:17
Nat Young puts in another solid performance in his Bells opener, extending his love affair with the wave that's treated him well throughout his career.

Then there's Matt Wilkinson, who looks determined to prove that the yellow jersey he's sporting is a good fit. Wilko drew fellow Quik Pro finalist Kolohe Andino and Miguel Pupo in his opener. It was a close one, with Andino jumping out to an early lead. But Wilko used discipline to grind out his win, waiting patiently for the long walls that open the door for his inverted angles of attack. As we noted after his win, Wilko looks the same, but he's got a new game. It wasn't all pretty Saturday. Kelly Slater struggled to get in rhythm with the Bells lineup. He looked brilliant on his first wave, nailing a few solid moves on riding a 5'10" Tomo with a round pin. But he fell on his only other attempt. Just two waves ridden, and the second was a 1.0. Meanwhile, Kai Otton found a wall that looked more like J-Bay than Bells. He got upside down three times and threw in a solid carve for good measure, which sealed the deal for Slater. 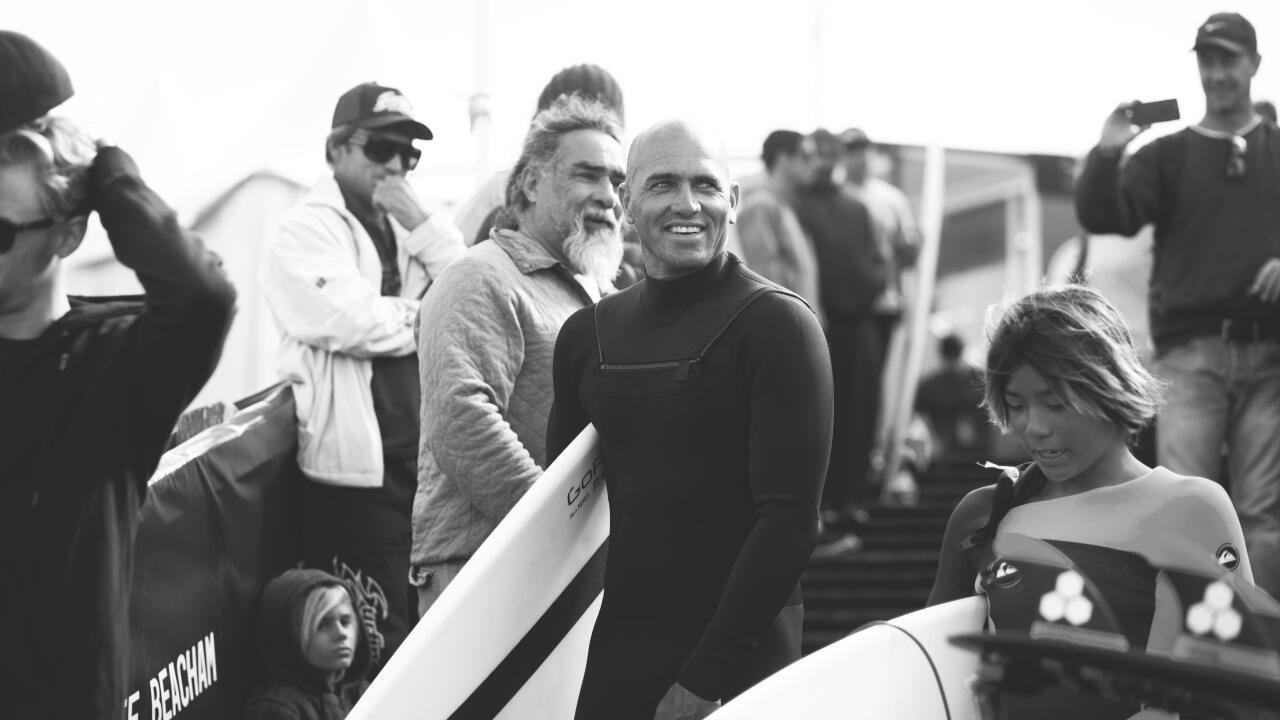 Kelly Slater will be hoping to get his groove back in Round Two. He's the first to admit it's gone missing of late. - WSL / Kirstin Scholtz

Kelly will face wildcard Timothee Bisso in Round Two, which, on paper, looks like favorable draw considering the caliber of talent he could have drawn. But wildcards are always dangerous, and Bisso will be surfing with nothing to lose. As for the other interesting Round Two matches, Josh Kerr and Dusty Payne will square off in Heat Four, Kolohe Andino and Sebastian Zietz have Heat Seven, and Quick Pro giant killer Stu Kennedy will be up against Matt Banting, who still considers himself a rookie after being injured most of last year.

The swell is expected to pick up significantly on Sunday in Australia, so be sure to tune in at 8:00 AM AEST.