Round 3 of the Men's division was completed on Friday at the World Surf League QS 1500 Praia do Forte Pro presented by Oi. The day was filled with lively heats and fast-paced action, which included the highest score of the competition thus far. With two days left in the event window, event organizers expect large crowds for the finale this weekend and will run all remaining heats in optimum tide conditions at the Papagente reefbreak at Praia do Forte in Mata de Sao Joao, Bahia, Brazil.

Heat 1 of Round 3 saw Joaquin del Castillo (PER) take an early lead with two midrange scores for a 13.50 total (6.00 + 7.50), but Matheus Navarro (BRA) blitzed the remaining minutes to earn the highest score of the heat, an 8.10 and a 12.35 total. Both surfers advanced into Round 4, eliminating Alan Jhones (BRA) and Yuri Gonçalves (BRA). 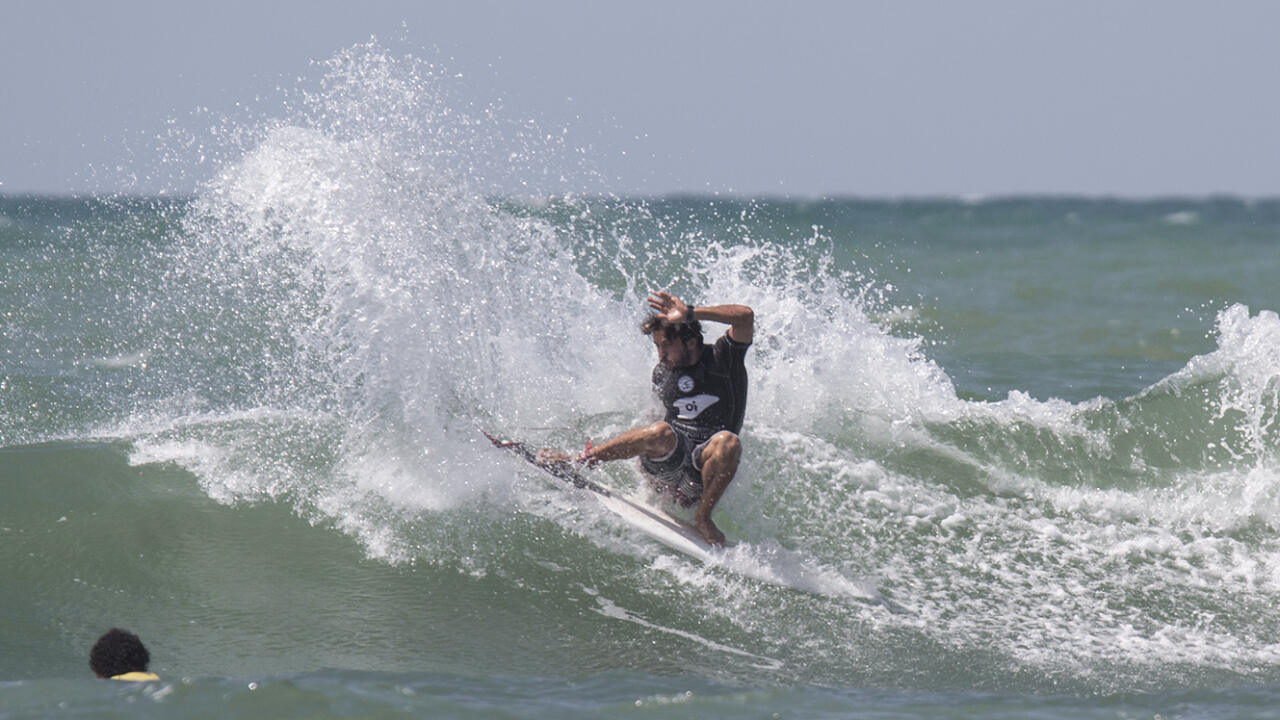 An ensuing tropical storm rolled in bringing strong onshore winds and heavy rains which left conditions choppy and caused an hour-long delay in competition. However, as the day progressed, conditions became more favorable, and the coral reef bottom provided rippable rights and lefts and plenty of scoring opportunities with waves in the 2-3 foot range (0.5-1.0 meter).

One surfer who took full advantage of the conditions was Thiago Camarao (BRA), who came out victorious in a high-scoring affair in Heat 6 of Round 3. Flavio Nakagima (BRA) came into the event having won the prior WSL South America QS 1,500 in Mar del Plata Argentina, and maintained his high-caliber surfing as he scored an 8.25 on his best wave. But Camarao blew away the judges by earning a 9.50 after using explosive rail-to-rail surfing and a variety of turns on a long righthander. "I feel like I used my priority well. I waited for a set wave to come in and it gave me a nice wall to work on," said Camarao in regards to his 9.50 score. "I did a bunch of turns and added a floater at the end and it got me an excellent score."

Camarao, who is known for an expressive air-game talked about his proximity to the world-class skateboarders he hangs out with and how they influence his surfing.

"That whole RTMF crew from Florianopolis rips and skateboarding is all about doing airs and carving grinds. We've been hanging out a lot together for the past couple of years and they've been trying to push me to do different grabs and stuff, but with skating, you can practice the same move over and over again on a ramp. Surfing depends a lot on the wind and the wave, but I try to vary my maneuvers as much as possible," finished off Camarao. Miguel Pupo (BRA) displayed his prowess as a WSL Championship Tour level surfer today as he took control over Heat 4 of Round 3. Most of the athletes have been focusing mainly on the punchy righthanders at Praia do Forte, but Pupo found his best scoring ride on a left for a 7.00. Pupo added a 5.80 for a 12.80 total to edge out promising Peruvian surfer Juninho Urcia (PER) and QS stalwart Jean da Silva (BRA). Charlie Brown (BRA) advanced into Round 4 along with Pupo with an 11.80 heat total.

"Conditions are a little tough out there, but I think it was the right call to run the event today so we can have the best athletes competing during the weekend and the forecast looks good," said Pupo.

Ironically, the 24-year old athlete is considered a veteran and is regarded as a role model by the younger surfers at the event. "It's funny that I'm seen as the older guy with more experience, but I'm cool with accepting that responsibility," continued Pupo. "I'm here more for my brother and sister (younger siblings Samuel and Dominik are both competing at the Praia do Forte Pro in their respective categories) and Mateus (Herdy) who's been hanging out with us. It feels good to help them as much as I can, but at the same time, I remember how I used to feel when I was their age and the excitement of winning heats and finding a good rhythm. For me, this contest is a great warm-up for the next CT event in Rio," concluded Pupo. A call is set for 7:00 am local time for continuation of the 2016 World Surf League Men's and Women's QS 1500 Praia do Forte Pro presented by Oi. Heat 1 of Round 4 in the men's division will see Joaquin Del Castillo (PER) face up against Marco Fernandez (BRA), Robson Santos (BRA) and Charlie Brown (BRA). When the Women's Quarterfinals resume, Heat 1 will see Silvana Lima (BRA) against Larissa Santos (BRA).