In the true spirit of the event, Olson dedicated his win to big-wave surfer and friend, Aaron Gold (HAW), who had a traumatic near-drowning experience in Fiji a week ago.

"Family and friends, anybody who knows me knows that means the world to me," said Olson after the win. "You can't put a price on family and friends. I'm just so happy that Aaron's back with us, 100 percent healthy and back with his family, so this one's for him for sure." 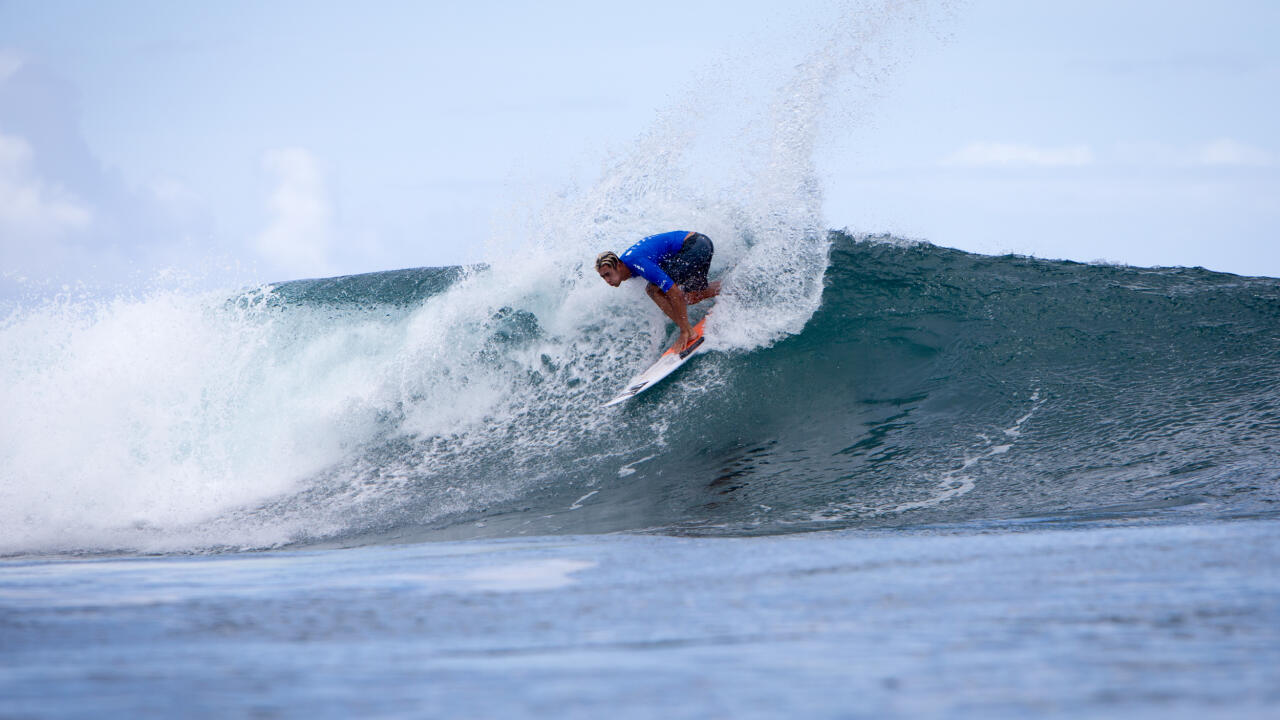 Olson didn't find a wave for the first 20 minutes of the Final, while Kemper and Mizuno battled back and forth for the lead and posted mid-range scores. With 10 minutes left on the clock, Olson bagged a 6.0 ride, paddled back out into position and was able to use priority for a set wave in the dying minutes of the heat. Using precision on his backhand, the 23-year-old edged ahead of Kemper for the win.

"I'm ecstatic. I'm so happy and I'm humbled and I'm honored and I'm just so stoked that that's how it went down," said Olson. "It was like the slowest heat of my life, I didn't catch my first wave till 20 minutes in the heat, and then I managed to get a 6 and I was like ‘ahh I only got one wave there's no way I'm going to get priority'. And then I lucked out and got one last set and it was all or nothing. I was like, ‘I'm either going to do good or fall' and I put my all into it and I'm stoked it worked out." Kemper showed consistency in the small surf, despite his appetite for freight-train sized surf. From waves of consequence in Fiji and a recent win at the Peahi Challenge Big Wave event in December to the playful waves of Bowls, Kemper's runner-up finish bodes well on the vast range of talent in the professional pool of Hawaii surfers. The goofyfooters of the Final, Mizuno, 17 and Apo, 18, were young standouts throughout the competition and ramped up the power on their way to the podium. Mizuno stayed busy in the 30-minute Final, while Kaulana posted the highest single wave score of the Final, a 7.50.

An equal standout of the day was Joaquin Del Castillo (PER), who impressed judges by earning the event's only 10-point ride. The Peruvian cracked a big turn into an open frontside barrel and followed it up with another solid carve, and continued to drop big scores throughout the heat. Del Castillo, an international standout of the event, is buried in a barrel. - WSL / Freesurf/Heff

The Punta Hermosa local posted the second highest two-wave combined score of the event - a 17.75 and showed progressive flair in Round 3 when he landed a frontside full rotation for an 8.65. But it was not enough to over take the heat leader, Sheldon Paishon (HAW) who was on fire throughout Round 3. Paishon scored a 9.90 and 9.25 for a near-perfect 19.15 combined heat total, the highest of the event. The Makaha surfer advanced ahead of Ariihoe Tefaafana (PYF), Barak Maor (HAW) and Del Castillo.

Taumata Puhetini (PYF), one of Tahiti's top athletes, earned an equal seventh-place finish, 395 regional points and $400 as the highest placing Tahitian in the competition. Puhetini, 29, traveled to Oahu on a scholarship award along with Enrique Turo Ariitu (PYF) and Heifara Tahutini (PYF), both who missed out in the early rounds. Puhetini wacks the lip on a frontside turn. - WSL / Freesurf/Heff

"We had a great team," said Puhetini. "Everyone surfed well, but sometimes in competition you cannot find good ones and just lose. But yeah we were a great team here… It's a really great place and the weather is like the same in Tahiti, there's some good waves too so was pretty good. We are all having fun here."

This was Puhetini's first time to Hawaii, and he hopes to return for the HIC Pro in October.

"It's really important for myself and for all the Tahitians because now that we are with the Hawaii region," he said. "We can get more points this year and get more ratings in the QS."

Defending event winner Joel Centeio and top names like Bruce Irons, Ian Walsh and Evan Valiere go down at the QS1,000 in Hawaii.