Banting in Fiji
7:09
After winning his Round One heat in the Fiji Pro Banting skips to Round Three, where he'll face the formidable Gabriel Medina.

Editor's note: Banting was defeated in Fiji Round Three.

A wise surfer once said that one man's Round Three is another man's contest win. For Matt Banting, truer words were never spoken. After his rookie year got derailed by injury halfway through, he's been back this season as an injury wildcard. But the road to success has had its hurdles: There's wrestling with surf fitness that's slow to return, competitive muscle memory that's churning back to life and, toughest of all, the confidence to compete against the world's best -- and win. Currently, he's ranked No. 27, due in large part to two Round Two losses at the start of the year.

But little by little, the Australian is finding his footing on the Championship Tour. After those early-round exits, he finished 13th in Margaret River and in Rio. If he does the same in Fiji, where he's about to face competitive prodigy Gabriel Medina, his slow climb will remain steady. For Banting, that's enough. He spoke to us about building himself up, the one benefit to being injured, and his long road back to form.

Matt vs. Kolohe in Rio
6:05
Taking down Andino was a big confidence-booster for Banting, who'd thought of his Californian counterpart as larger than life (literally) from a young age.

WSL: How are you feeling now that you've made a couple heats?
Matt Banting: I definitely felt the most comfortable and confident with my surfing yet in Rio, so my surfing is coming along. I've been surfing with much more commitment, and I feel like my confidence has improved a lot.

Getting that win over Kolohe in Rio was pretty sick. We're both really competitive, the same age and he's in the top 10.

WSL: Why is that?
MB: Because of the performances I put on in Rio. Even that heat with Michel Bourez, which I lost, I had a 6 and an 8. I'm happy to come in with a 14-point total in waves like we had. And getting that win over Kolohe (Andino) was pretty sick, too. We're both really competitive, the same age and he's in the top 10. But he's been massive in surfing ever since he was introduced to it. When I was 14 and rocked up to the US Open he was already on all the billboards for Nike and Hurley...I was in awe.

Banting Soars at Margaret's
0:39
Kolohe may have been a household name from a young age, but Banting has a few moves up his sleeve, too. Consistency may be the name of the game moving forward.

WSL: Was that intimidating?
MB: Kind of, yeah. Because I thought, how does a 14-year-old kid get on billboards? His profile was so massive already. He was the top rider for the team. So having an experience like I did in Brazil was a big confidence booster and put me in a good frame of mind, for the whole nine or 10 days.

WSL: What was your preparation plan for Fiji?
MB: I went home to train and get super fit before heading over. I did some swimming and work on the lungs -- got the big-wave prep going. Because you don't know what you're in for in Fiji. It could be 20-foot or it could be two-foot. 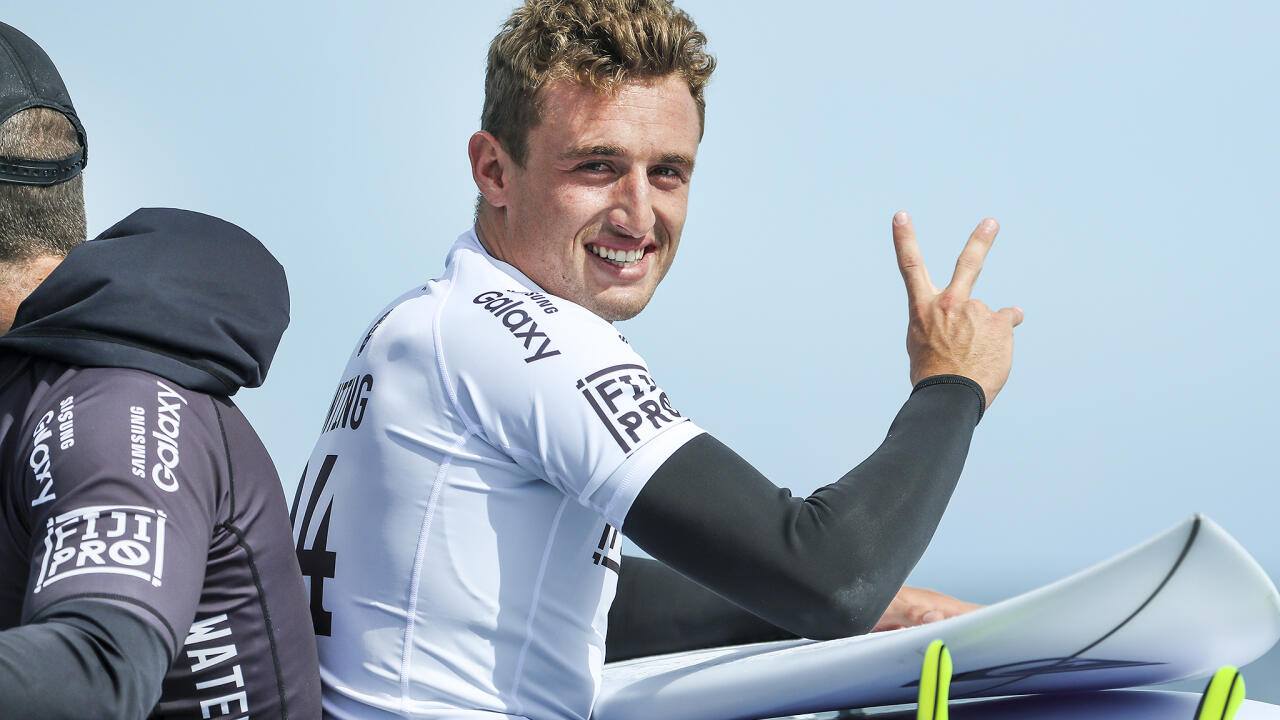 If Banting is feeling any frustration about his hurdles post-injury, you'd never know it. - WSL / Kelly Cestari

WSL: Overall, do you take a specific type of approach to preparing for Fiji, especially going from a beachbreak to a reefbreak?
MB: I want to be on top of my game in the pool no matter what waves we get thrown in. I'll be doing that for events like Fiji, Chopes, and Hawaii. Surf a bunch of lefts at home and get used to heavier, bigger boards. So get the legs and body ready.

When I was in J-Bay I had a little cry and woke up in the morning going, 'Why me?' But then you've got to believe it's all part of God's plan.

WSL: Take us back to last year, when your season got derailed. You went home from J-Bay, found out you couldn't surf and started rehab. It was your rookie year. What did you think?
MB: When I was in J-Bay I had a little cry and woke up in the morning going, ‘Why me?' type of thing. But then you've got to take it all as it comes and believe it's all part of God's plan. That's helped me so much, just with pressure and going through that phase. To have time to sit back and think about where I'm actually at, what I was actually doing. Because when you're doing events, you go through so many, back-to-back-to-back. It feels like yesterday that we were in Snapper. So you don't have the time to check in and see what's really happening. It wasn't good to sit back for six months, I had to -- but I took advantage of it.

Banting Describes J-Bay Exit
0:28
Barely halfway through his rookie season, Matt's fall on an alley-oop benched him for the rest of the year.

WSL: What were your days like?
MB: A lot of the rehab was so painful that walking out each day and feeling like I was getting better was such a good feeling. I was so thankful to anybody that was helping me. Like, ‘You're getting me closer to the final goal.' It wasn't improving that quickly, though, so I had to get these PRP injections : They take blood from your arm and spin it in a machine, and then pump it up into the affected area. You have to do one every week, and after three weeks it really made a difference.

I tried to surf Snapper when it was pumping on the first of January, and I lasted about an hour. I was cooked. It was a shock to the system.

After the rehab program, I started strengthening and conditioning, around December. I was feeling stronger than ever, coming into January I was feeling my strongest, and my left leg was as strong as my right, but my whole surf fitness was totally out. I hopped back in the water and tried to surf Snapper when it was pumping on the first of January, and I lasted about an hour. I was cooked. It was a shock to the system, knowing the level I was at and where you should be. I'm still getting there -- if I have a massive day of surfing, it taxes me. Your surf fitness takes ages -- Jordy (Smith) said the same thing after he was injured.

WSL: How did you deal with it, mentally?
MB: I watched the contest in J-Bay, and it started eating away at me. Like, ‘Oh, I should be there.' And then a couple I didn't watch. I watched J-Bay and Tahiti, not much of the Europe leg -- I was over it, and spent time with friends and family, and met my girlfriend, Lana, then. So everything happens for a reason. 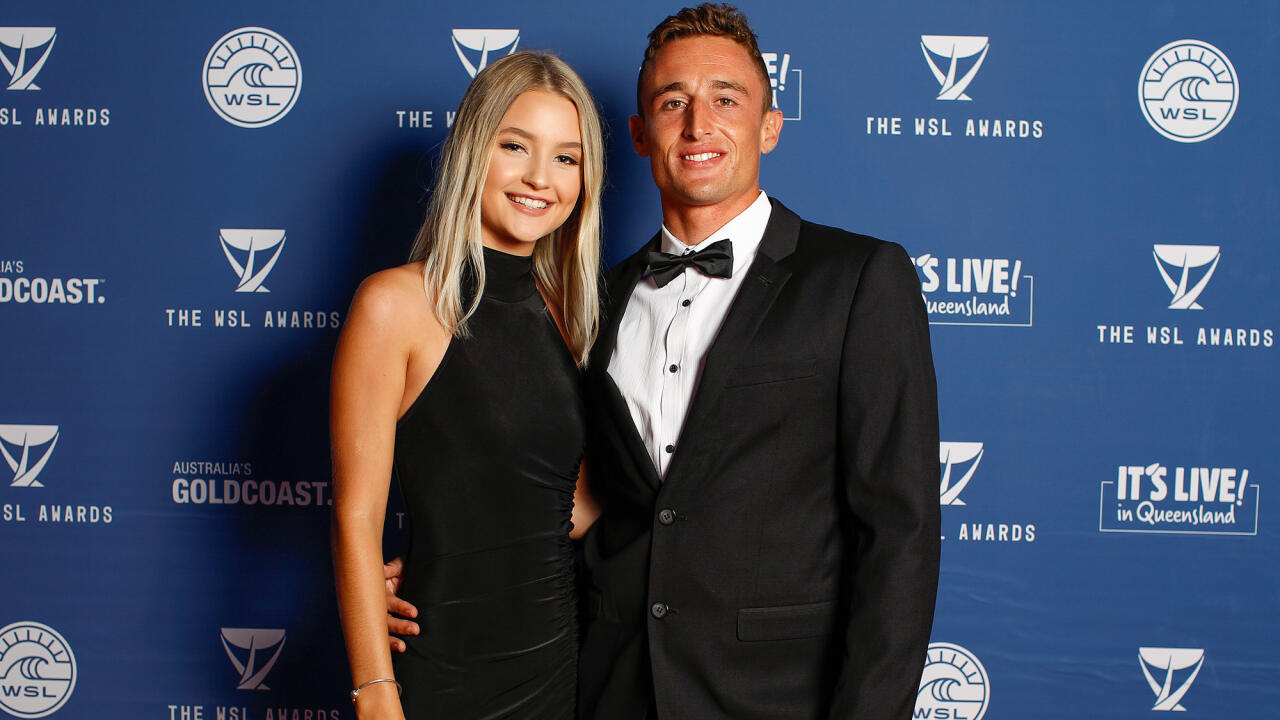 Matt met his girlfriend, Lana, while he was home recovering in Port Macquarie. - WSL / Ridgley-Hewitt

WSL: Now that you're back, how are you feeling about your season so far?
MB: I put such high expectations on myself going into Snapper, and I let myself down. I saw a sports psychologist coming back into it, and he said, ‘you're just coming off a six-month injury.' So we're leaving all the expectations behind, and I'm just going out to have fun and do what I was doing last year. Coming off an injury, it feels like you have so much to backtrack on. You want to nail it and be on top right away, and it just doesn't happen like that.

I put such high expectations on myself going into Snapper, and I let myself down.

And when it doesn't, you have to realize where you come from and realize that you haven't even surfed from July to January. It's like nearly starting surfing again. That's what got me down last year, too, because I got one of my best results -- a ninth in Rio -- and then I got injured. I felt like I was building, and then got knocked down.

WSL: Do you have a mentor, or someone you can lean on for guidance, who can remind you to go easier on yourself?
MB: My coach and manager is like my second father -- he and my sport psychologist, who works for the Australian High Performance Centre. He wrote me an email in bullet-point form: ‘What approach do you want to have going into Brazil, and how do you want to feel coming out of it?' 'Be assertive, be ready.' 'Only focus on yourself and nobody else's performances.' 'Be prepared for average surfs leading up to the event.' 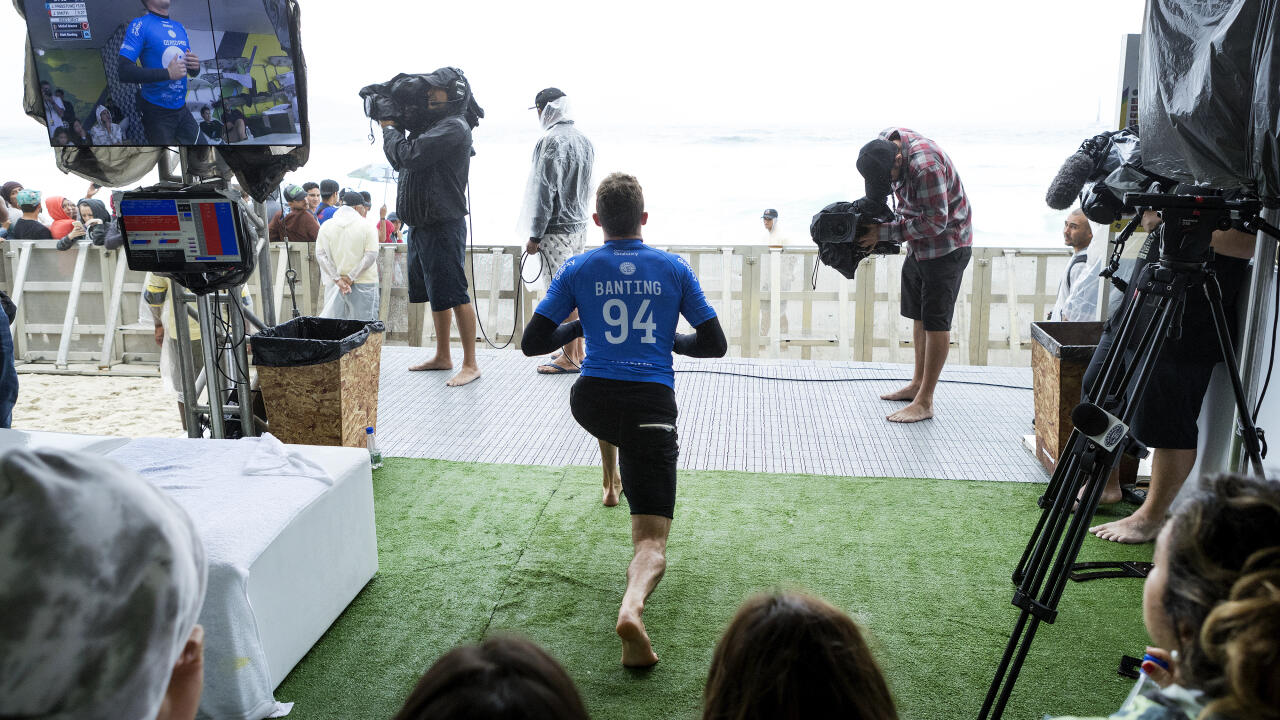 Despite the ups and downs, Banting is finding his feet on tour. - WSL / Kelly Cestari

Like one day I forgot some gear, went over to Grumari, and couldn't surf. I left a whole bag -- it had my fins and wax! Then I went back, got lost, took toll gates and everything. So you just wash it off, recenter. If you start getting eggy and thinking ‘everything's going bad, everything's against me,' it starts going so quickly downhill.

I put all these expectations on myself: You show up and look at all these guys and think, ‘I'm not surfing as well in my freesurfs. Am I surfing long enough? Am I putting in enough preparation?' Always questioning yourself. And then it's like, ‘just be sure in what you're doing. You've done it all before.' But I'm finding my feet.

Catch Banting go up against Gabriel Medina in the first heat of the Fiji Pro, Round Three when competition resumes.