On Tuesday, a significant increase in swell greeted the athletes on Day 2 of the QS 1500 Maui and Sons Arica Pro Tour in Chile. An overcast sky kept conditions glassy as waves in the 8-10 foot range (2.5-3 meters) fired through the powerhouse reef-break knows as El Gringo. Round 1 of the competition was completed with high scoring barrels, a few broken boards and several athletes getting washed over the jagged rocks at the third Qualifying Series event on the 2016 WSL South America calendar. Marcos Correa (BRA) earned an excellent score of an 8.40 after being spat out of one of the longest tube-rides of the day. He proceeded to get pinched on several other attempts, until he finally backed up his score with a 5.33 for a 13.73 total, the highest of the day.

In Heat 4 of Round 1, competitors took full advantage of the conditions as the sets started pumping into the line-up. Juan Arca (ARG) found his way out of a deep barrel on a set wave for the highest single-wave score of the day, a 9.00 (out of a possible 10 points). Arca however was unable to capitalize on his high-score, as Dean Bowen (AUS) threaded his way into first place after posting an 8.57 and a 4.83 (13.40 total) on his two best rides. "I felt really good out there," stated Bowen. "I was having a lot of fun and got some good barrels, but it was a tough heat. Juan (Arca) got a nine and Adrian (Garcia) got a good barrel also, so I knew I needed to get some good scores. I was lucky enough to get that 8.57 which won me the heat. The waves were amazing."

Bowen seemed right at home at El Gringo and is looking to maintain his performance level as the event continues.

"My goal here is to make it to Finals day and on the QS I just want to work my way up as much as I can, have fun doing it and surf in events with waves like this," said Bowen. "We're getting treated like the CT guys and that's amazing. Thanks to all the event organizers and all the people here in Arica." 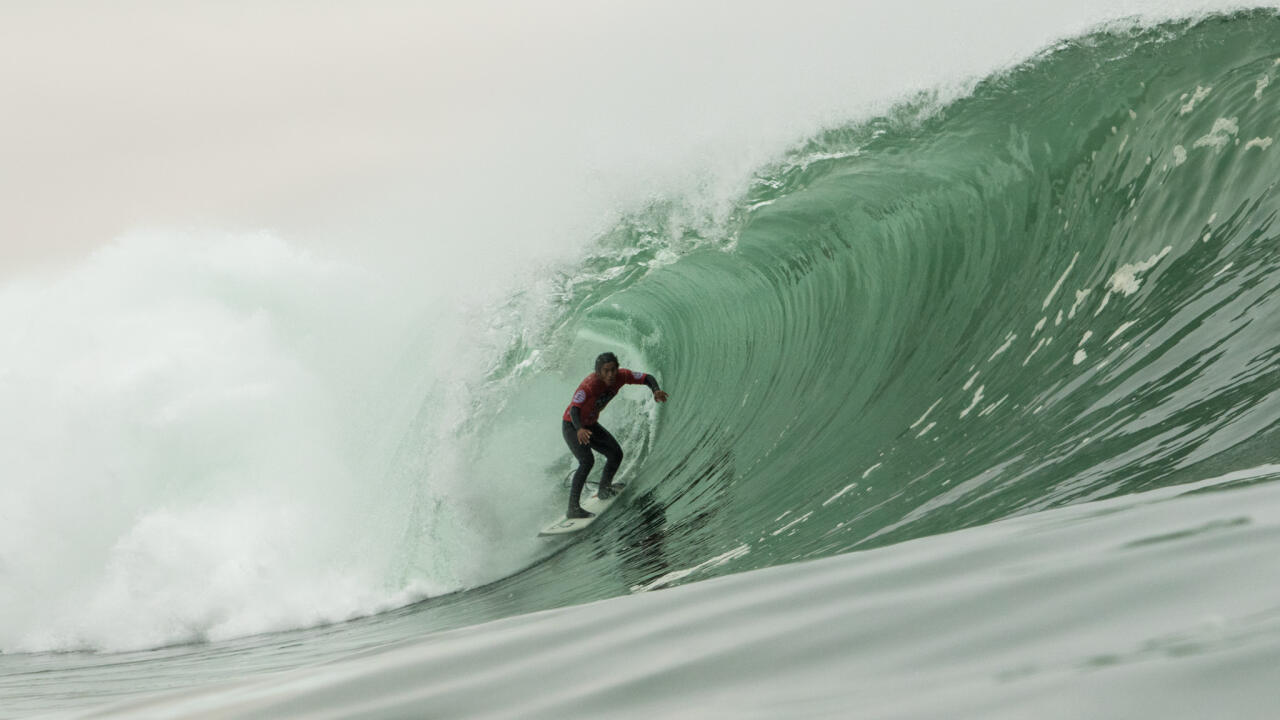 Joaquin Del Castillo (PER) was another athlete that looked comfortable surfing against the challenging conditions at El Gringo. Earlier this year, the young Peruvian won a QS1000 event in South Africa and has already shown he is primed for another win in Chile. In his first 3-man heat of the event, Castillo earned a 12.80 heat score over local legend Renato Aguirre (CHL) as both surfers moved on to Round 2 of the Maui and Sons Arica Pro Tour.

"I'm super stoked that I won that heat and I feel completely at home here in Arica and surfing the waves at El Gringo," said Castillo. "I love competing here and the waves have been incredible today. The athletes are surfing at a very high level and the event here is amazing. There are sets with great barrels and I'm honored to be representing my country on the world circuit. I want to do as well as possible here and take advantage of catching as many tubes as I can this week." Myles Laine-Toner (USA) had a horrendous start to Heat 6 in Round 1. Myles got thrown from the lip and broke his surfboard on his first wave. In a low scoring heat, he battled back from adversity and was able to defeat the 2013 Maui and Sons Arica Pro Tour event champion Alvaro Malpartida (PER) by the score of 7.67 to 6.37. Both surfers moved on to Round 2 while eliminating Erik Bustos (CHL), who only caught one wave scoring a 1.80.

"I'm pretty stoked about beating a former champ here," said Laine-Toner. "I mean, the waves were tough, I had a hard time picking the right waves, but I'm more bummed that I broke my new board on that first wave. I took off a little late and just nose-dived. But I'm stoked that I got one good wave at the end to make it through. There are a lot of talented surfers and people are making it look good. I got some really good waves before the contest started today and I thought I was going to get the same kinds in my heat, but unfortunately I didn't." As the day progressed, El Gringo's roughneck personality showed up and made things challenging for the athletes. Yage Araujo (BRA) took a nasty fall, broke his board and ended up taking around eight waves on the head before being dragged over the rocks. Luckily, the Brazilian came out unscathed, grabbed a new board and caught a nice barrel-ride in the dying moments of the heat to take first place with a 9.73 total.

With completion of Round 1, event organizers stepped in to call competition off until Wednesday for the start of Round 2. "Even though the swell is coming in from the Southeast, which makes the waves close-out a bit at the end, conditions were pretty epic today," declared WSL South America Tour Manager, Roberto Perdigão. "Due to conditions being even heavier than yesterday, WSL South America, in collaboration with event organizers, have placed all security measures into effect to maintain the safety of our athletes while facing the challenging conditions here at El Gringo."

A call is set for 7:30 am local time for the continuation of the 2016 WSL QS 1500 Maui and Sons Arica Pro Tour. The event's top seeds will now enter competition in Round 2. Heat 1 will see WSL South America rankings leader Leandro Usuna (ARG) face up against Danilo Cerda (CHL), Lucas Silveira (BRA) and Sebastian Correa (PER).