A cold hard fact is that for a place that birthed the sport, Hawaii hasn't been breeding a whole lot of CT qualifiers lately. In comparison to Brazil and Australia, at least. But another cold hard fact is that throughout the amateur ranks, the majority of Hawaii groms pretty much smoke their compatriots on the mainland of America...Until about age 18... Josh Moniz is no stranger to Huntington Beach, where he competed last week in the QS10,000. He earned an NSSA National Open Men's title in his amateur days and now looks to find that winning form as a professional surfer. - WSL / Sean Rowland

We discussed this conundrum with two of Hawaii's brightest World Tour hopefuls, 18-year-old Seth and 20-year-old Josh Moniz. What's the difference trying to qualify coming from Hawaii as opposed to Oz? Do good waves hurt your QS campaign? And how, exactly, can young Hawaiians get over that damn "bridge"? 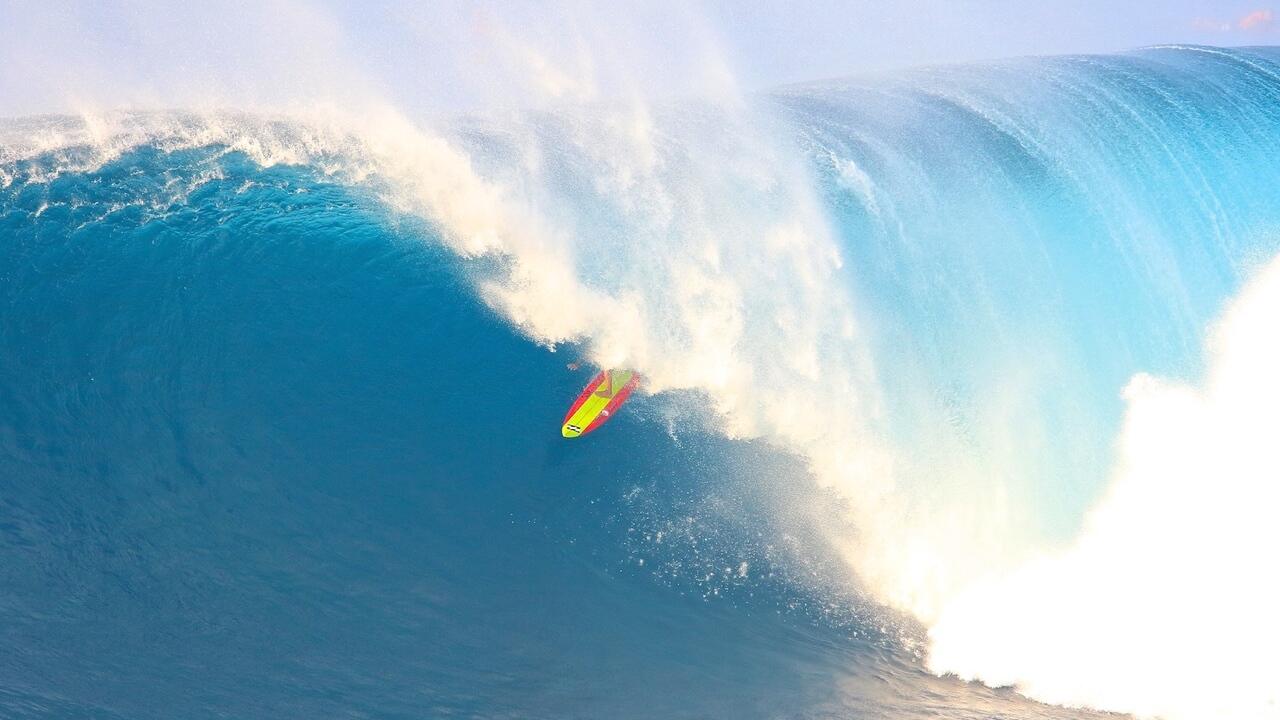 Seth Moniz's prowess at Jaws blew a lot of minds last winter. Thanks to Dooma Photos he was a nominee in the 2016 Big Wave Awards Tube category. - WSL / Dooma Photos

WSL: How long have you guys been on QS?
Seth: This is my very first year full-time, but I can't even get into all the events. I can't do US Open yet, but there's a select few 10Ks I can enter. Some 6Ks, some 3Ks. Ones that CT guys don't do.
Josh: This is my first full year on the QS and I'm basically able to enter all the 10Ks. I was on the QS last year, too, but I was more cruising with no pressure.

So, being from Hawaii, is that actually tougher to prepare for the QS since the waves are usually better out there? Do you try and surf good or bad waves to practice?
J: Yeah, the waves can typically suck on the QS, so you have to give up trips sometimes to prepare. Like, going to the Mentawais, believe it or not, doesn't really help your QS-game.
S: Yeah, I recently went to the Mentawais and was surfing perfect waves, then went to Japan after to surf a QS and I was baffled. If you train before an event, you're just that more on-point. When you're surfing bad waves, like how we do over here at Sandy's sometimes, your legs are used to it. The Mentawais are just too perfect [laughs]. Surfing perfect waves to prepare doesn't help at all?
S: Yeah, I think so [laughs]. It definitely helps in the long run, but right before an event…not really.
J: You just want to surf basic beachbreaks, three turns… But if you go to Tahiti right before the US Open…that does nothing for you. You'll see the waves at Huntington and just be so unmotivated, so maybe it's a mental thing, too. Maybe it's even better to just chase swells while you're younger, before you wanna qualify. Because it doesn't really help while you're trying to. You have to be that focused.

In Hawaii, groms seem like they're typically better than the kids their age on the Mainland (West and East coasts) But this doesn't necessarily translate past 18. Why is that?
S: Yeah that's true and I really don't know. I don't know if they were just pushed too hard when they were young and then got over it or they just got tired of competing. Really, not a lot of kids from Hawaii like leaving home.
J: Right, and our dad [Tony Moniz] would always hammer that into us. He'd call it The Bridge. "Don't get stuck in the middle of The Bridge," he'd say. He's seen so many kids our age that had everything going, but they got stuck in the middle of the Bridge and couldn't get across. Seth at the Vans US Open of Surfing. - WSL / Jackson Van Kirk

So kids in Hawaii don't like to leave. Is that cultural thing, or they don't like to travel for bad waves?
S: I just think some kids from Hawaii get homesick.
J: They're islands, so everything's close, and travelling is such a mission elsewhere compared to where we're from. Even all the logistics to prepare for a trip is a mission [laughs] and I think people from Hawaii are more laidback from that constant-moving lifestyle. Also, if you don't have a good crew to travel with, that's an issue. A lot of kids don't want to travel with someone they're not stoked on or enjoy. Seth is getting his first crack at QS10,000 like the Ballito Pro. - WSL / Kelly Cestari

But there's definitely been some guys that seemed so guaranteed to qualify and get over that bridge…
J: I think surfing in Hawaii just might be too much of a lifestyle. Joshua Moniz had a big win in 2015 at the QS event in Martinique. - WSL

What do you mean by that?
J: Well, I went to Australia three years ago to check out the Billabong training center and I never had a real coach before that, and the kids over there take it soooo much more serious than the younger kids at home in Hawaii. With us, it was like: pack up the car, leave and surf all day, and that was our training [laughs].
S: Yeah, it was more a hobby for us and our friends. No one was constantly coaching us on how to do a proper turn with body placement, form…
J: It is getting a lot more serious now in Hawaii over the last few years, though. You go down to Kewalo's now and it's a full-on training ground for little groms. People filming the kids and the parents dissecting the tape…
S: But I guess we were down at Kewalo's putting in our time and so was Zeke and Carissa Moore, Keanu Asing, Alessa Quizon… Josh on home turf, preparing for his heat at the 2015 Hawaiian Pro at Haleiwa. - WSL / Kelly Cestari

And a lot of them qualified, so maybe something's working at Kewalo's. So what do you guys need to get over that "bridge" between Hawaii and qualification?
S: I think it's a matter of learning the QS because the QS is a lot different than the Pro Juniors.
J: Right, in the Pro Juniors there's always those kids you know you're better than and you can afford to make a couple mistakes.
S: But in a QS, no one is easy. You can't afford to make mistakes. Basically everyone is on your level…or better.
J: A lot of them you've never even heard of but they're fully destroying it.

Like who, for example?
J: Hizunome Bettero…Michael Rodrigues is a freak…When you first start the 10Ks, it takes a year to get to know who the guys even are. Is that part of it? Knowing your enemy, or competitor, I should say?
S: I think that's part of it. But you should also just stick to your own game-plan too.You know that guys like Filipe Toledo; they might not go on the best, biggest waves, but they can turn a crappy wave into a great score. And Michael Rodrigues will go on a closeout and land a huge air. Knowing your competition in that sense. Who else are some other guys that you'd say have a chance to qualify from Hawaii?
J: Imai DeVault, he's so gnarly. Once he learns how to surf a heat a little better, I don't see why he wouldn't. Kalani David; he can do everything, that kid. Noa Mizuno, Cody Young, Kaulana Apo, Barron Mamiya -- they're a little younger but have the potential. Barron's becoming one of the gnarlier guys at Pipe now.

And as brothers you travel and do the QS comps together now? As well as heats at home, too?
S: Yeah, me, Josh and Zeke [Lau] push each other a lot at home and Zeke teaches us a lot because he's been on QS for a little while now.

You ever get sick of each other or scrap like the Irons did?
J: Aw, sometimes, but we get over it. [laughs]
S: I think that's more our older brothers. [laughs] But that was pretty cool to watch on vids how competitive Bruce and Andy were. I liked seeing that.