Caroline Marks is only 14, but the Floridian goofyfooter has already emerged as a huge force on the Juniors Tour. She just won her second straight US Open Juniors title. As if that's not enough, she's already No. 31 on the QS rankings (she made the Quarterfinals of the QS6000 Supergirl Pro) and she's already had her first taste of a CT event. Bottom line: she belongs on your radar.

0:47
One reason for Caroline's success is that her surfing is already mature.

The young Floridian has about a month to breathe before diving into the grind again. We caught up with Caroline while she was still in game mode at the Vans US Open of Surfing to see how she trains for success and what the back end of the year looks like for her.

WSL: You're having another big year already, with your quarterfinal finish in Oceanside and now a repeat win here. What do you attribute that success to? Can you train for confidence?
Caroline: I definitely have to prepare mentally and physically. Being the defending champ gives me a lot of confidence. I definitely fed off that. Caroline Marks defended her Vans US Open of Surfing title when she clinched the contest again this year. - WSL / Jackson Van Kirk

WSL: You've had the chance to compete at every level -- junior, qs and the CT event at Trestles last year. Do you approach different levels differently?
CM: It's really cool to do well at those levels at a young age because the Tour is where I want to be, but I really have the same mindset going into each event.

WSL: What mindset is that?
CM: Get waves, be focused and really aggressive. It's pretty simple.

WSL: What's you're five-year plan? Do you have a goal for when you want to make the CT?
CM: I've only done two QS events this year and already [in a good spot on the rankings] so I'm not really sure when but whenever I'm ready. But definitely in the next five years for sure. When I feel ready is when I'm going to go for it. But I'm trying to get as much experience I can get now, like going to Supergirl and surfing against those girls now. 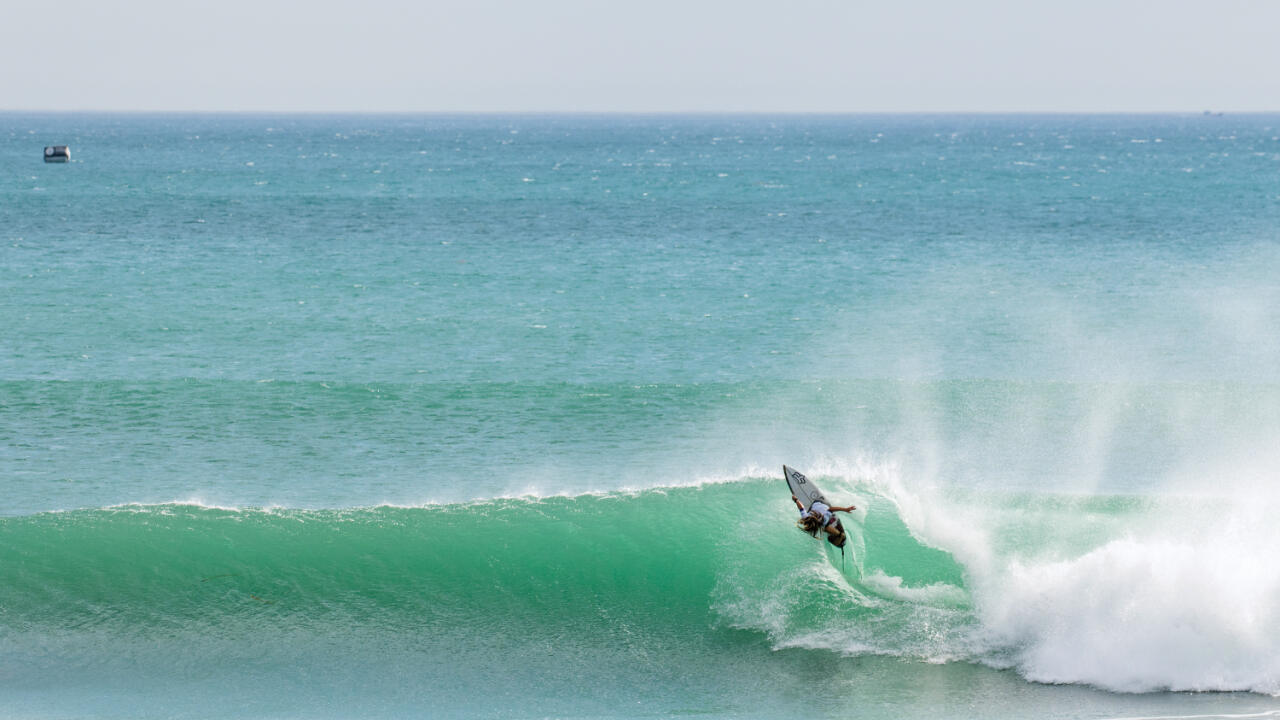 WSL: What do you need to work on the most to prepare yourself?
CM: There's a lot of traveling and I'm still with my parents. It's mainly being mentally ready for all that. I know I eventually will be. I definitely want to be.

WSL: Competing on the QS and the junior series all year long how do you keep up your stamina?
CM: I try to be as consistent as possible. I try to stay positive. You just have to really prepare.

It gets overwhelming but I train for that all year.

WSL: But at the midseason mark, you don't feel like it's catching up to you?
CM: We have a couple months off and then three months of straight contests with practicing and competing and it gets overwhelming but I train for that all year. I think the best way to get the stress off of you is going on a nice trip with your friends. Being with my family is the best way to get that pressure off of me but I train for that all year so I'm ready for it. But it is a grind.

WSL: Are you planning one of those trips now?
CM: Yeah, I'm going to Bali for two weeks with a group of boys as part of Surfing Magazine's Grom Games. Then me and my mom and my little sister are going on a little vacation and then meeting the rest of the family in the [Florida] Keys. In 2015, Caroline got a shot to compete in a CT event -- the Swatch Pro in Trestles, Calif. -- as a wildcard. Marks competed valiantly but lost out to Carissa Moore. - WSL / Carissa Moore

WSL: Who's in your family? Does everyone surf?
CM: I'm one of six: I have one sister and four brothers. Some of us surf more than others. Mom doesn't really surf but she'll get out once in a while.

WSL: When did you start surfing?
CM: I started really getting into it when I was about 10 so it hasn't been that long. I used to horseback ride, which is super random I know. So it wasn't that long ago. That's the year I actually started surfing. I told my dad I want to be sponsored and he said, "You have to get yourself out there." Once I put a jersey on I was like, 'This is what I want to do.'

WSL: Horseback riding? Did you ever compete?
CM: Oh for sure I competed. It was crazy. It was the weirdest thing. I was so into it and then one day I just did what my brothers did and we went surfing and I was like, 'Horseback riding? Surfing is way better!' (Laughs) I just fell in love with surfing.