Professional longboarders will converge at Queens surf break from August 22 - 25 to showcase noseriding, cross-stepping and cutbacks at the Duke's Waikiki Kane/Wahine Longboard Pro, Stop No. 7 on the World Surf League (WSL) Longboard Tour. Part of Duke's OceanFest - an annual ocean sports celebration honoring legendary Hawaiian surfer Duke Kahanamoku - the Duke's Waikiki Longboard Pro is a qualifying event for both men and women. It is the only regional competition for Hawaii surfers to gain entry into the Jeep World Longboard Championship, which takes place in China this December.

Kahanamoku is being remembered in more ways than one this month. As a three-time Olympic gold medalist, the announcement of surfing officially being included in the 2020 Tokyo Olympics is a poignant stride in Duke's wish for global recognition of his native sport. WSL Hawaii will host the Duke's Waikiki Longboard Pro at Queens, notoriously known as the wave that Duke grew up surfing, and also celebrate what would have been his 126th birthday on August 24. Every year, the celebration lights up Waikiki. - WSL / Freesurf/Keoki

"The magnitude of being on Waikiki beach and competing for nine days honoring Duke is pretty special," said Event Co-Chair Chris Colgate. "We have 20 different competitive events and incorporate in excess of 3,000 athletes. The array of events we have are indicative to Duke's spirit of aloha, his inclusion of bringing people together and also his legacy."

Colgate also mentioned that by partnering with WSL, Duke's OceanFest is providing a sanctioned competition where local longboarders can qualify for the World Championships. "We're approaching this as an opportunity for the pros in Hawaii who maybe don't have the means or sponsorship to travel to other events around the country, and potentially around the world, a qualifying event that gives them the ability to get into the Championships in China."

Last year, longboard phenom Kai Sallas took the title in the men's division at his home break and went on to place thirteenth in the 2015 World Longboard Championships. The Waikiki native was gracious in his praise of fellow competitors at the 2015 Duke's OceanFest. Sallas paddles out to the lineup with Diamond Head as a background. - WSL / Freesurf

"It felt more like an expression session rather than a heat where you have to battle for waves," said Sallas. "Everyone was ripping and catching a lot of good waves." Event organizers anticipate solid surf for this year's event as well and will provide a swell forecast a week out.

Stacia Ahina (Kapolei), defending event winner in the women's division, placed ninth at last year's Championships in China. Although it wasn't the result she was hoping for, the surfer felt it was an eye-opening experience that she looks forward to achieving again. "Watching women from all over the world surf, it was amazing," said Ahina. "The waves were good and the girls were even better than I even imagined on that scale. It was a good motivator. I got a taste of it and now I want to go back again." 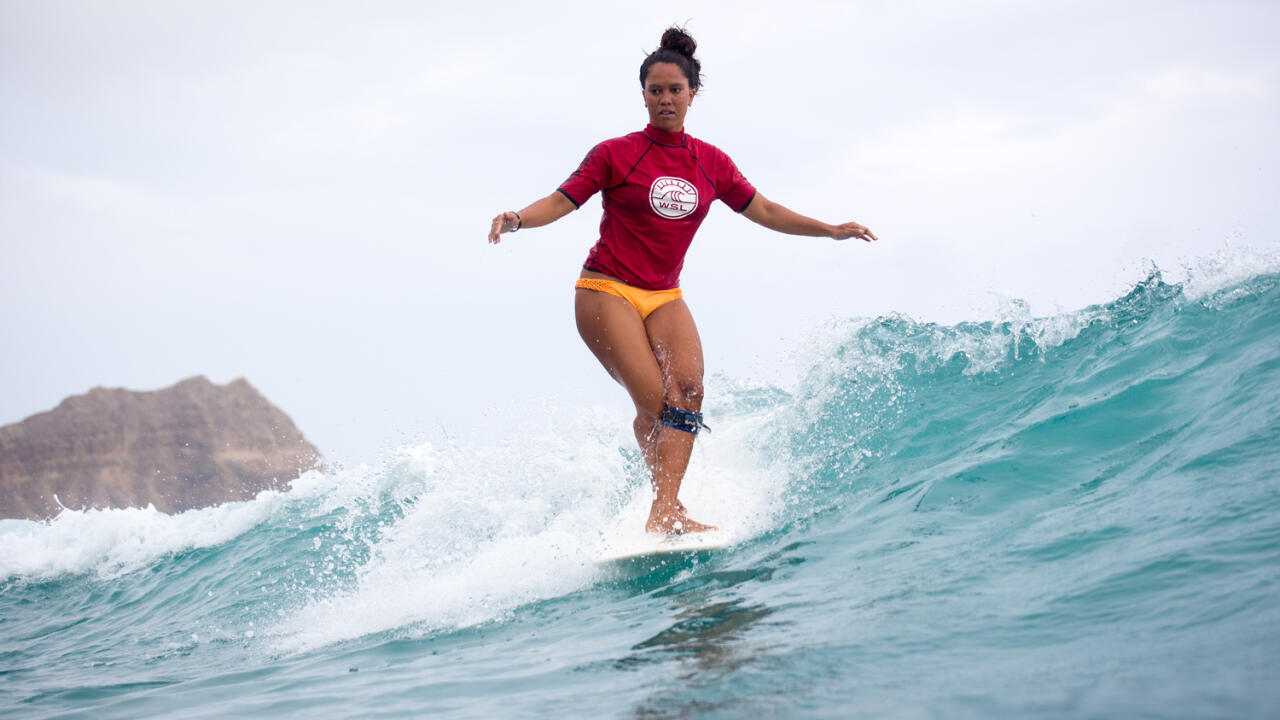 "It always brought the family together," Ahina recalls. "We grew up surfing because there's so many of us - altogether there's seven of us - and it was affordable. It was one of those things where everybody just went to the beach and we kind of took care of ourselves. My mom and dad brought boards and we surfed all day and just loved it."

Duke's OceanFest is a nine-day ocean sports celebration that highlights everything from Menehune surf contests and the Wounded Warrior canoe regatta to beach volleyball, surf waterpolo, dog surfing and swimming competitions. 2016 marks the 15th anniversary of the outdoor festival, which is perpetuated by the Outrigger Duke Kahanamoku Foundation.

Ahina and Blomfield will head to China in December for the Jeep World Longboard Championships.