Shane Dorian has continued his love affair with twin fins, taking out the division at the 2016 Four Seasons Maldives Surfing Champions Trophy for a second year in a row.

Dorian looked in good form all day finding a number of long Sultans tubes and unleashing his furious rail game on the clean four-foot walls on offer all day. The big-wave charger was able to post an excellent heat total of 16.24 (out of a possible 20) to overcome fellow Hawaiian Jamie O'Brien in the Final. "I'm so stoked to be back here in this beautiful place," Dorian said. "Surfing with all these guys is so sick, I'm just having a blast. That board had not felt good in any surfs until my first heat and then it all just started to click, which was lucky. Hopefully I can make the final in the thruster division and have a shot at getting back here."

After a shaky start to the contest in the single fin round, O'Brien was keen to impress on the twin fin. And he did, posting impressive scores on his way to the final. "I'm just stoked to be in the final," O'Brien said. "It's been really fun surfing against all these guys. My first heat today was almost like a Championship Tour (CT) lineup. It's been really cool to surf with Bethany; she is such an inspiration. I'm just loving it here."

Bethany Hamilton was a standout performer on the twin fin. With only a couple of days practice under he belt on the unique craft, the Hawaiian goofyfoot looked like she was on a thruster going vertical turn after turn. It was not enough to progress to the semifinals so Hamilton will look to reset and focus on the thruster division. "This was my first time surfing a twin fin," Hamilton said. "It's really fun. I like how you really have to draw out your turns. Surfing with all of these guys is so amazing. It's just fun to be in the water with them. It gets me excited to surf and pushes me. I'm not in it to take them down, but it would be cool to make a heat against them."

After taking out the single fin division, Australian Taj Burrow was hoping to set himself up for an overall final appearance with a good result in the twin fin contest. But Burrow was unable to find a solid scoring wave while O'Brien and Dorian went blow for blow pulling into long draining barrels in the dying minutes of the heat. Although coming up short in the end, Burrow was flaring. - WSL / Sean Scott

"I didn't know waves that good would come through at this place," Burrow said. "Those waves at the end were amazing, I was so jealous I wasn't on them. I didn't surf this morning so it took me a while to get used to the twin fin. I never really got into a rhythm. It's all good though I still had a hell time."

Also being outdone by the Hawaiian duo's tube time was local trials winner Hussein ‘Iboo' Areef, whose stylish backhand was unable to get him the nod from the judges on this day. Iboo setting up for the pit. - WSL / Sean Scott

"It was fun out there but quite hard," Areef said. "I was really hoping to get a bomb set wave but it didn't really happen. I'm just looking forward to getting on the thruster."

Rob Machado was unable to make back-to-back finals appearances as he came up against a rampaging Dorian. In a heat filled with non-stop waves, the two friends went wave for wave, each posting a number of scores in the excellent range. Machado's amazing heat total of 18.00 wasn't enough and Dorian took the heat win by just 0.77. 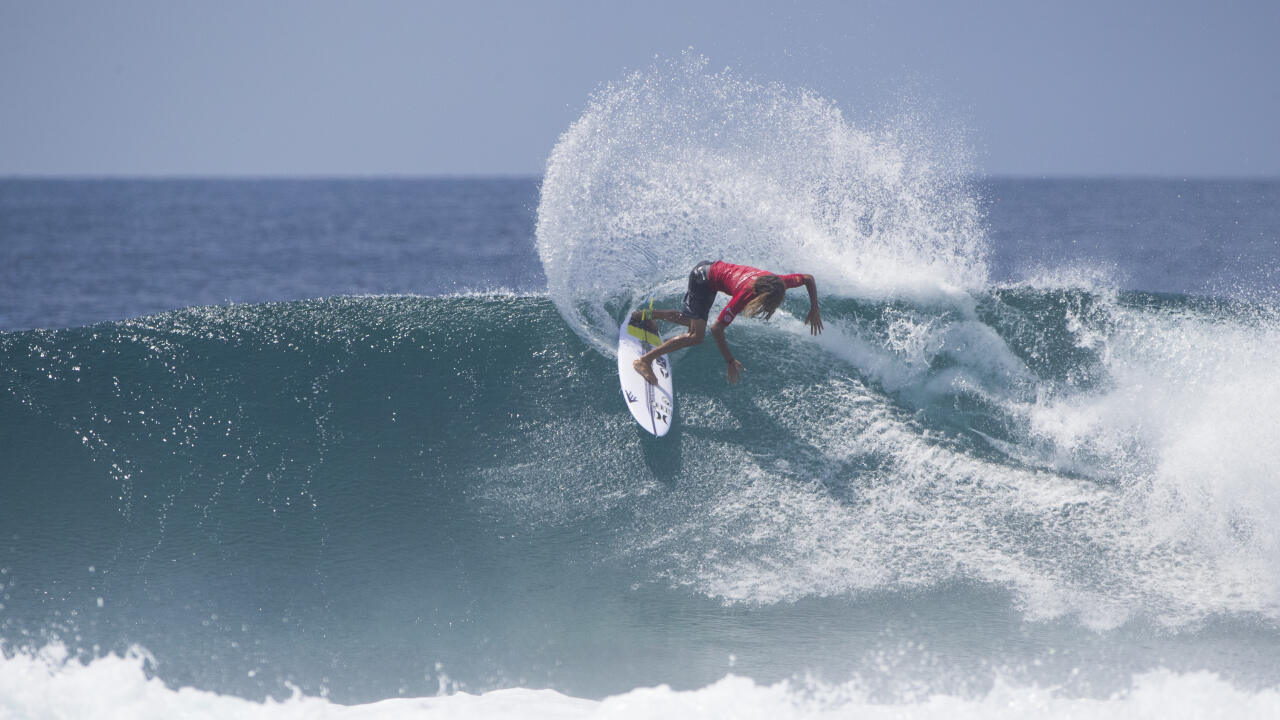 The cruisey Machado being not so cruisey. - WSL / Bennett

"Surfing against Shane again was so fun," Machado said. "It's been so long since we have and in conditions like that, it was just perfect. It was a really good heat. The waves kind of didn't stop and we were both posting high scores, which is always a good indicator of the fun we're having."

Travis Logie may swap his thruster for a twin fin after the South African goofyfooter put on an absolute clinic at Sultans. Logie posted a solid heat total of 14.97 but was unable to overcome O'Brien who was given an excellent score for his tube riding. Logie going upside down on his twinnie. - WSL / Sean Scott

"I felt really good on the board," Logie said. "It's really tough to compete against a natural footer in waves like that especially when they're getting barrels, it forces you to go really hard on your backhand turns. I'm really happy with how I surfed out there." The two finalists and their crafts. - WSL / Sean Scott