The Médoc Océan Lacanau Pro resumed in wind-affected bigger conditions this morning with competitors taking on bumpy three-to-four foot surf. Conditions gradually cleaned up and allowed event officials to run both the men's and women's second rounds of competition.

Current Qualifying Series leader and Italian superstar Leonardo Fioravanti lit things up around lunchtime with an incredible heat, to belt a near-perfect combined heat total of 19.00 out of a possible 20 points. Fioravanti opened with a decent high-seven score before he opted to go on two similar long lefts. On those, he dished out several powerful, backhand gauges right in the critical sections of the waves for his best two rides of 9.17 and 9.83. 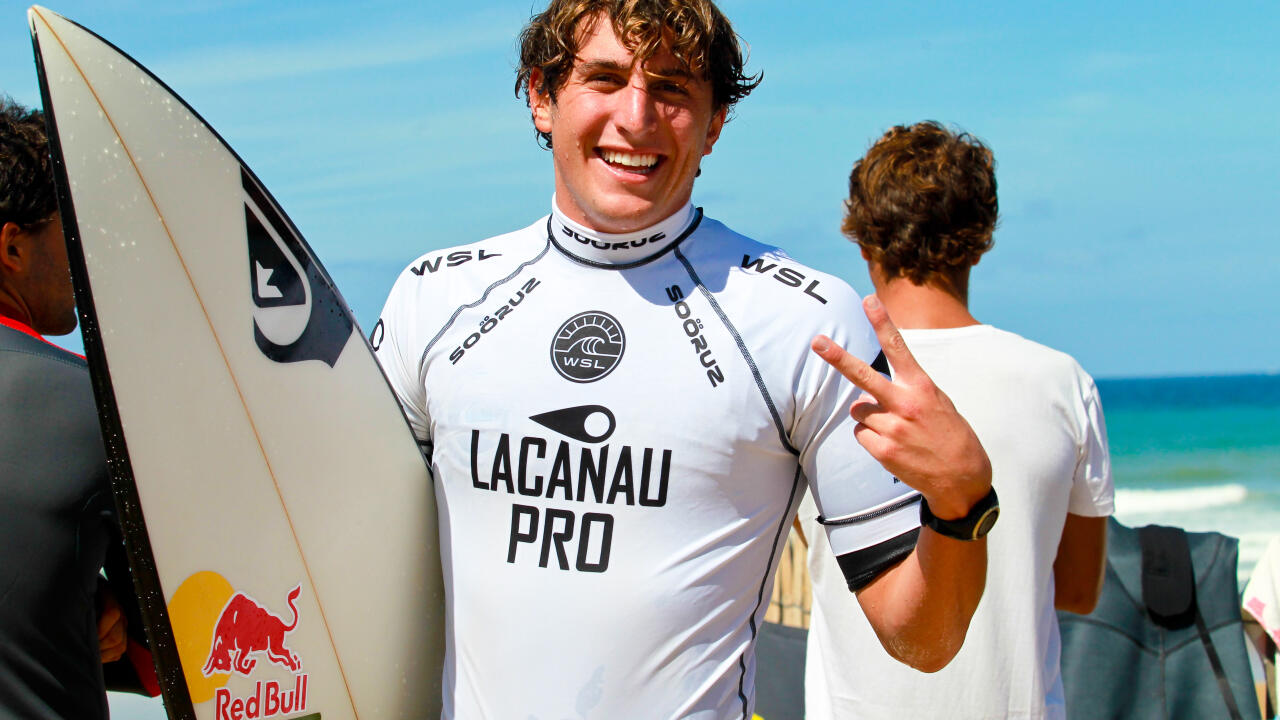 Fioravanti may play it cool, but as the current QS leader the target is on his back. - WSL / Laurent Masurel

"Conditions were tougher yesterday for my first heat, today there were plenty on offer and I was able to really show what I can do," he reflected. "I really had loads of fun out there. Now each heat is different so I'll focus on the next one and adapt to whatever conditions we have then, and just make the most out of it!"

Coming off a breakthrough runner-up result in Cornwall last week, Angelo Bonomelli managed to keep his excellent rhythm going in the earlier rounds in Lacanau. Bonomelli once again demonstrated his ability to adapt to the ever-changing conditions and found a couple of good waves to perform on. "It was tough out there this morning but I was lucky enough to find both lefts and rights and get a couple of good scores so I'm stoked to get through in first," he said. "Twenty minutes just fly by in those conditions and you can either be lucky and find them or not. I hope conditions will improve again so everyone gets opportunities to surf well."

Australian top junior Reef Heazlewood continued his successful Lacanau bid with solid forehand surfing on the bumpy lefts on offer. With 15 events already under his belt this season, Heazlewood seemed eager to gain as much experience as possible early on and will look to upset some of the event's top seeds in the next rounds. "I've been watching conditions for a while before my heat and decided to take the outside option," he said. "It seemed some of the really fun lefts started way outside with a couple of sections before it links up in the inside. There was a lot of paddling involved today so I'm going to re-hydrate and rest a little bit before I go and try some of my different brand-new boards to figure them out."

Shane Campbell, who won in England last week, confirmed his excellent form with a dominant performance for his opening heat in France. The Australian didn't let his recent success alter his game plan and continued to scour the lineup to find the waves with most potential.

"I'm happy to get that first heat done, I'm trying not to get knocked out in the first round in each event of the Europe leg," he stated. "I'm riding the same board I had in England. It's just a magic board that I've got so I'm happy with that."

Former World Junior Champion Ella Williams later led the women's field into the second day of competition with a huge performance to advance into the third round. The goofyfooter opted to surf the long lefts on her forehand and repeatedly destroyed multiple sections on her way to an impressive 16.26 heat total. "I'm stoked there's good waves today, it's picked up a lot from yesterday so I was just trying to stay busy and get a lot of waves, and it paid off so I'm stoked!" she said. "My season hasn't been going that great, but we're towards the end of the year so I'm more relaxed and trying to take it comp by comp and enjoy myself. I'm out there getting a lot of practice in heats, practice is good."

Local pro surfer and current QS No. 14 Justine Dupont easily made her way into the quarterfinals with two solid heat wins. The talented all-around water woman has been excelling in the lower-tier QS events, but is still waiting for a big break this season in the bigger competitions to re-claim her spot among the elite Top 17. "I just got back from Costa Rica a couple of days ago and have been suffering a little bit from the jetlag, but it's great to be back here in Lacanau," she said. "These smaller events are a great way to keep busy and stay in that competitive vibe. I started my season well, but unfortunately completely missed the bigger events mid-season. Now I'm feeling better again and confident to do better in the coming events."

France's Maud Le Car wrapped up today's exciting show with a dominant performance in the last heat of the day, where she went all-out on a clean right for a near-perfect 9.23, the highest single-wave score of the women's event.

Surfers and event officials will reconvene at 8 a.m. Friday morning to reassess conditions and decide the day's schedule.