The Pro Anglet resumed today in pumping four-to-five foot surf at Chambre d'Amour and enjoyed an exciting day of beautiful conditions and high-octane action in the lineup.

Competition re-started with the remaining two heats of the women's opening round before moving on to the top seeds round that witnessed excellent surfing from some of the best surfers on the QS ranks.

Fresh off a victory at the Médoc Océan Lacanau Pro, Ella Williams kept the ball rolling into her first matchup in Anglet and secured the women's highest heat total today. The Australian found similarities with conditions encountered last week up the coast and continued to display her graceful carves and radical turns to belt two solid scores. The Anglet crowd got a good show on Thursday at Chambre d'Amaour. - WSL / Laurent Masurel

"Waves were pumping and the tide's coming in so it was definitely moving fast and you had to keep an eye on what's going on, but I'm so happy to be here," she said. "I'm focusing on myself and what I can do in the water, what the other girls do is out of my hands so I'm focused on surfing well and having fun." Defending event champion Pauline Ado had a successful comeback in Anglet waters, navigating through a tricky high-tide lineup to advance in first. The talented local, former Championship Tour surfer, was extremely picky in her heat and surfed only two waves to clinch her qualification for the next round. "It was a bit tough, we surfed that critical moment close to high tide where there's less consistency so twenty minutes just fly out there," she stated. "I'm super happy to make it and I really hope I'm able to get more waves in the next ones and get into a good rhythm. I surf here a lot, but it's still a beach break so conditions are unpredictable and reading the lineup is key." 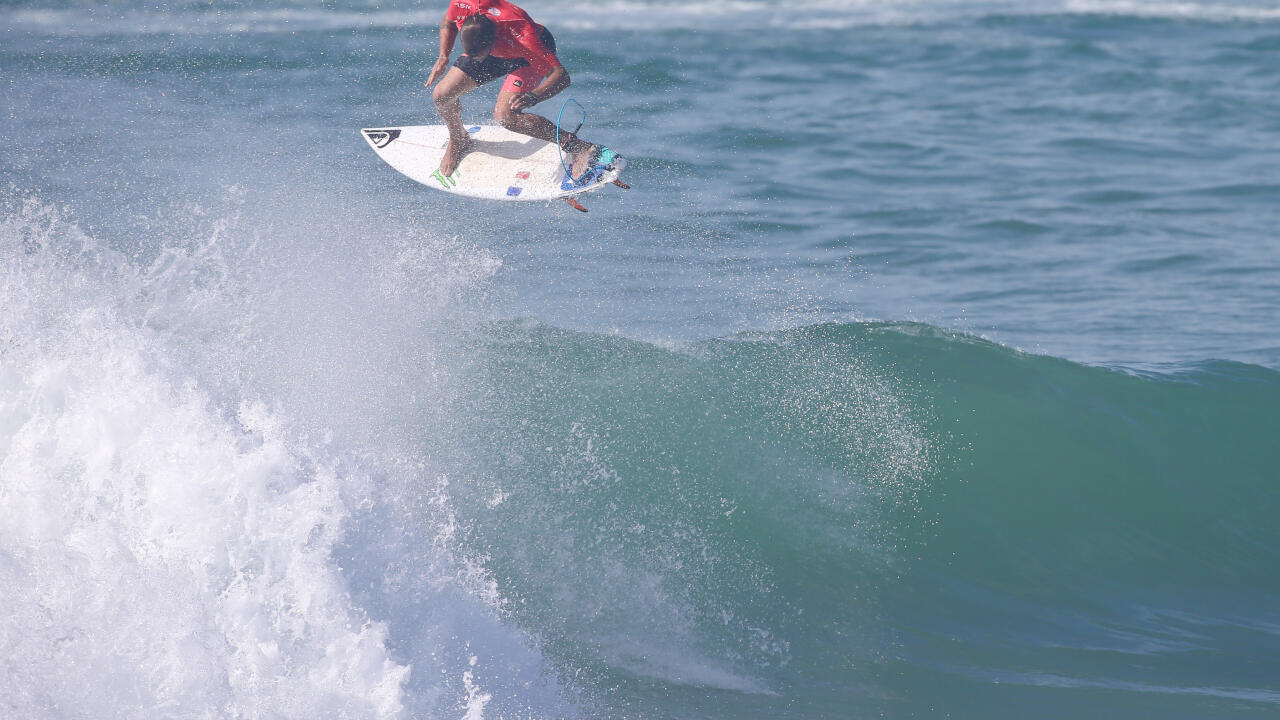 Following the women's action, the men's second round was completed as well as half of the third round.

Brazilian phenom Yago Dora absolutely blew up in his late afternoon bout and scored near-perfection on two incredible aerial maneuvers for a 9.13 and a 9.60. In a difficult situation mid-heat as Medi Veminardi (REU), 25, had combo-ed the field with his slick backhand attack on two excellent rights, Dora went for broke on a first wave with a huge forehand rotation, inverted and grabbed for his first high score. Shortly after, he launched into an even bigger air, grab-free and completed the rotation into the flats for a 9.60 and the heat win. "My first left was basically a closeout so I just figured there was a good ramp to try an air and went for it," he reflected. "That made me really confident and I got that other 9 straight away. A lot of times I see people making heats doing regular turns on the really good waves but for some reason I can never find those good ones and never get the scores, so I had to try something different and I'm stoked it worked out and I'm surfing again tomorrow!"

Portugal's Pedro Henrique highlighted the afternoon's third round as the reigning European Champion was the only surfer to find a beautiful barrel on his backhand, belting an excellent 8.33, one of the biggest scores of the second day of competition in Anglet. Adrien Toyon edged No. 1 ranked Fioravanti in his Round Three match. Both surfers advanced to Round Four. - WSL / Laurent Masurel

"The heat was tough up until I got that wave, most of the sets were closing out and I was never in the right spot," he analyzed. "It was a split-second decision to pass on the first wave of the set and take the second. I went and thought that wave was way too fast and the only way to make it around the section was through the barrel, luckily it stayed opened and I got it good. We have a lot of hollow waves in Portugal so I have a good experience of riding barrels, but I think the most important in that situation was that I was calm and could think clearly and make the right choice."

Current QS World N°1 Leonardo Fioravanti scrapped through two heats to advance into the fourth round, without never really finding his rhythm and was put in danger in both his appearances in Anglet today. "The waves were amazing all morning, both for the girls and us, I'm stoked to surf a few heats in great conditions," he commented. "I'm here to win as in every other event, but I also like the opportunity to work on different things without worrying as much as if it were a QS6,000 or 10,000. I'm here with my mom and going home every night, it's really essential to be surrounded by the right people to feel good and perform."

Surfers and event organizers will reconvene at 7AM Friday for a men's call to possibly re-start the third round of competition while the women will be on call at 9AM.

On paper the best day of the window at the moment. Swell remains in the chest to head range with light local winds in the morning, although some left over wind chop from an overnight breeze possible.This pulse is slowly fading during the day with the most consistent waves in the chest to head region at the start of the day with offshore winds likely first thing, before the hot weather brings an afternoon sea breeze later in the day.