Perfection and History at Vans Pro
2:49
One of the best day's Virginia Beach has seen for competition in recent memory graced the Vans Pro Men's QS3,000.

Competitors at the Vans Pro Men's QS3000 were treated to pristine conditions at 1st Street Jetty in Virginia Beach Thursday thanks to a gracious Tropical Storm Fiona. The top seeds took full advantage of the good waves.

For the first time in Vans Pro history a perfect 10 was achieved by Miguel Tudela on a wave that expected nothing but his best surfing. The Punta Hermosa, Peru native is accustom to waves with much more power and size in his home country. But, when Virginia Beach turned on today he was more than prepared and unleashed multiple powerful turns all the way to the sand. Tudela prepares for what would turn into one of the best heats of his QS career. - WSL / John W. Ferguson

Perfection wasn't enough for Tudela, who backed up his 10 with an excellent 8.50 and nearly matching Flavio Nakagima for the event's highest heat total.

Nakagima made his debut in Round Two with a brilliant performance amid the day of high-performance surfing and posted the Vans Pro all-time highest heat total with an 18.93. Nearly achieving perfection himself, the Japanese born, Brazilian raised surfer tapped into his resources and earned a 9.93 before posting a 9.00 -- making it a battle for runner-up with nearly ten minutes remaining. 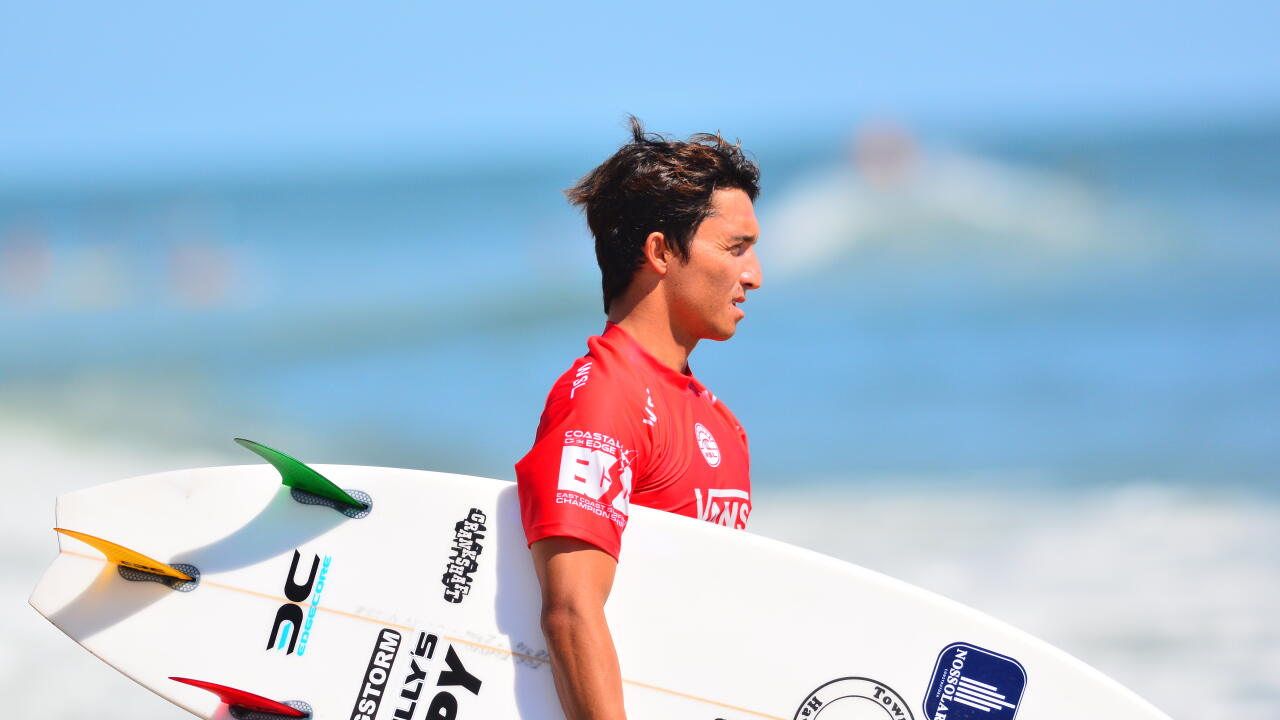 Nakagima earned a win at the Rip Curl Pro Argentina QS1,500 earlier this year and is looking to double those points with a win here in Virginia Beach. - WSL / John W. Ferguson

"That was the best heat of my life getting those two massive scores and it felt absolutely incredible. I was training in Huntington Beach getting ready for this event and I need a really good result here to start earning points toward the big events. I want to keep my head in each heat as it comes and really make a run at this event -- I'm just having so much fun here in Virginia Beach. It's my first time here and with the people, the food, and even some waves coming through today fortunately, it's just incredible." Hailing from Sao Paulo and enriched with Japanese heritage, Nakagima is a perfect blend for turning small waves into something extraordinary. - WSL / John W. Ferguson

"My mother lives in Japan and I always have a laugh with people when they ask me ‘Nakagima, are you from Japan? And I always say no, no I'm Brazilian (laughs). It was great to compete in Chiba and have my mother come out to that event, she was so excited to see me surf and is watching the live scores for this event so she's stoked as much as me."

Colin Moran nearly found himself eliminated from the Vans Pro Men's QS3,000 as the clock wound down and he was in need of a score to find himself in an advancing position. Just when he counted himself out, a swell line appeared that turned into a beautiful 1st Street Jetty gem Moran was able to hit continuously to shore. Despite not competing in many contests this year, the Newport, Calif. surfer made two important heats today and is into Round Four.

"I thought I lost that heat but a double-up started coming and just thought I'd try to do as many backside hits as I possibly could. I needed a six and it started getting slow at the end so I thought it was over. It's all about being in the right place at the right time with some wave standing up and others just mushing over.

"Having this event pretty close to home is great in terms of being in the same country. I'm not at the point where I can travel to all of them so I try to make the most out of ones I do. I've been doing a lot of filming and different clips for a movie I'm a part of so that's been exciting, but I'm looking forward to making it far into this one and hopefully get a win to help carry me into the next event." With California recently having a flat spell, Moran came into this event more than prepared and found an early morning gem to capitalize on. - WSL / John W. Ferguson

Carlos Munoz has a smile that is known around the world, a smile that may have been removed, if only briefly, had a wave not come through in the final fifteen seconds that offered Munoz optimal scoring potential. In the same situation as Moran, Munoz faced elimination needing a 5.53 but Mother Ocean provided him a last second opportunity that he did not spoil. Posting an excellent 8.60, the Costa Rican went from third-place to first and now finds himself in Round Four -- meeting the expectations of what a wildcard is capable of.

"I was just praying for a wave to come with the seconds just ticking by and when I saw that wave I knew it was the score. I wanted to get a really big hit on the first turn and then finish the wave strong all the way to sand -- I'm still smiling just knowing how difficult this wave is and whether or not it will give you a chance."

"After getting a good result at the US Open, I'm now sitting in a good spot on the rankings and need to back up that last event. I was so excited when I got a call about coming here as an event wildcard and just want to make it all count. My dream is still to qualify and I'll be giving it everything I have." Beginning his campaign in the first heat of Round Three, Kaito Ohashi dropped a 9.00 to start the round and continued the excellent scoring from Round Two. The Japanese contender hasn't found a big result just yet but is on track to do so here in Virginia Beach with a Round 4 appearance.

"The waves were so good today and reminded me of my home break in Shonan when it's pumping -- this is the best any of us have seen Virginia Beach so it's amazing to get a heat in," Ohashi said. "We all travel together which is really great to see all the stops on tour and have a good time in and out of the water. I've been having a fun year going to different events but hoping to get a good result here and get my year on track. Hopefully we keep getting these type of waves and really put on a show."