Monday at the Swatch Women's Pro was gray and chilly on land, but saw hotly contested heats and breakthrough performances in the water. The day's biggest standout was none other than Stephanie Gilmore.

After a season in which she hasn't made it out of a single Quarterfinal matchup, the 6x World Champion has been on fire at Lower Trestles, where she won in 2014. But on Monday, her competitive zeal was back in full effect, as she took down World No. 2 Courtney Conlogue in Round Four, and World No. 3 Carissa Moore in the Quarterfinals.

Steph vs. Carissa: Battle of Trestles Champs
0:56
And just like that, Gilmore gets the "Quarterfinal monkey" off her back.

Gilmore's stumbles this year have confounded her as much as they have puzzled her fans, and Monday marked a personal coup.

"I was actually really nervous going into that," Gilmore said after her Quarterfinal win. "I'm just excited to get past that Quarterfinal monkey on my back. Obviously to see Courtney go out was good for Tyler, but we're all here for one thing, and I want to win." Gilmore won the Swatch Pro in 2014, its inaugural year, followed by Moore in 2015. With the Hawaiian out of the running, Gilmore might just take back the event crown -- but first she'll have to get through Nikki Van Dijk, who's also having new success here in San Clemente.

Van Dijk's Stellar Performance
10:02
The Australian took down Malia Manuel, and put on an impressive show.

Van Dijk is currently sitting at the top of the Qualifying Series (QS) rankings, which guarantees her a spot on the CT again next year. But her CT record has been less than stellar -- she's currently No. 12 -- and so far at Trestles, she's been surfing like she has something to prove. Along the way, she took down No. 8 Malia Manuel, and moves on to the Semis for the first time this season.

Erickson's first match of the day pitted her against Hawaiian Tatiana Weston-Webb, who was predicted to win the facoff. With a rep for taking down veteran surfers and an unparalleled backhand power-hack, Tati easily could have had the upper hand.

Sage Erickson's Stepping Up
0:56
After a slow season start, Sage Erickson has been upping her game. Exhibit A: Her Round Four win at the Swatch Women's Pro.

Instead, it was Sage who came out firing in the chilly conditions. She got to work quickly, putting a pair of sixes on the board and surfing with the kind of confidence that has been missing in many of her previous performances. Tatiana, meanwhile, has talked in recent months about learning more about priority. But a priority mistake is what let Sage slip through to her final winning score. Tati will no doubt break down the matchup and tighten things up next time around. 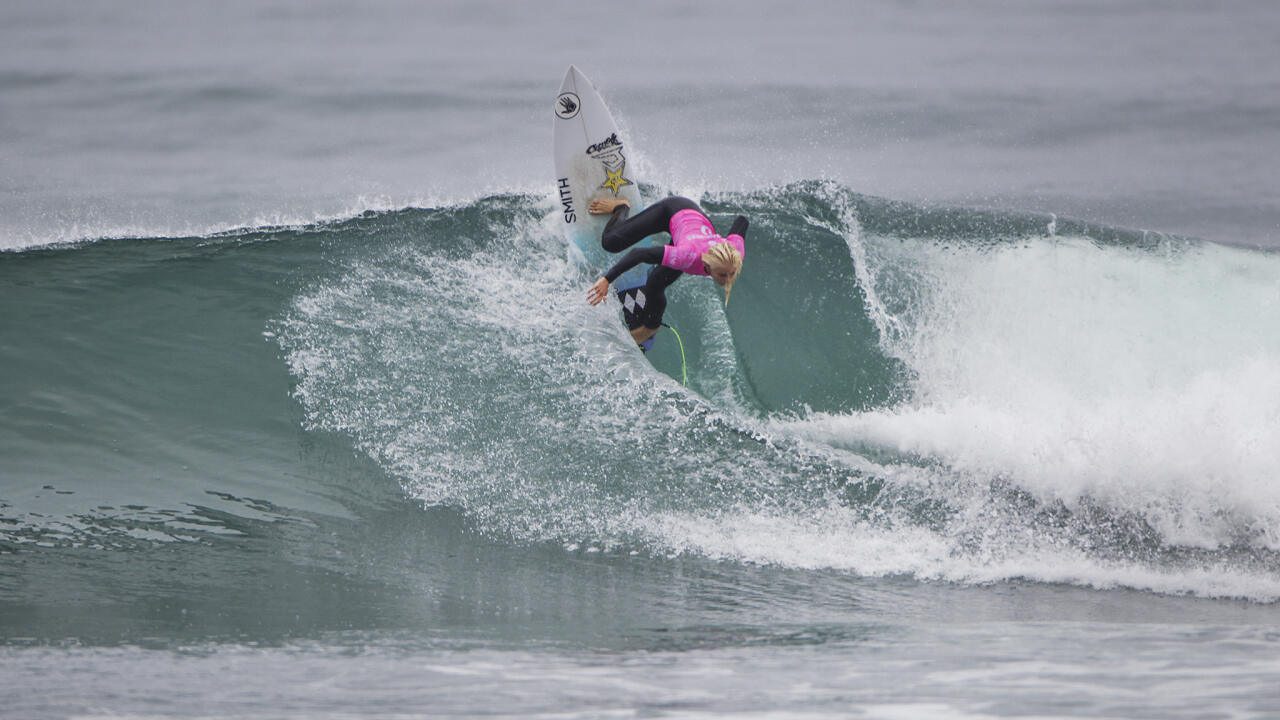 Tatiana never quite found her groove in Round Four, despite some of her sharp hacks. - WSL / Sean Rowland

But Erickson didn't stop there. In her Quarterfinal heat she again faced a well-known powerhouse on tour, this time in the form of Johanne Defay. Momentum may have played a role in Sage's success: She just won the Pantin Galicia Pro, a prestigious Qualifying Series (QS) contest, which not only boosted her to No. 4 on the QS rankings, but boosted her confidence, too.

Erickson Gets Past Defay
0:59
California's Sage Erickson kept her roll going by winning a tight Quarterfinal match against Johanne Defay.

"You can lose a lot in this sport," she said afterward. "Winning over in Spain, it was a highly rated contest and there were a lot of tour girls over there, gives me a bit of confidence, but this tour is a whole other ballpark."

The title race also heated up today, as World No. 1 Tyler Wright came one baby step closer to lifting the World Title trophy at the end of the year. Tyler's one-way freight train continued to roll through Lower Trestles, this time with a Quarterfinal win over Laura Enever. If you had any doubts left about Wright's intentions to win it all this year, one glance at her ferocious performances here should put them to rest. "It's definitely different for me this year and I'm just going with it," she said after her win. "I'm going out to do my job -- and that's to win every heat and every final. It's been that from the start of the year and it'll be that to the end."

Catch Wright, Gilmore, Van Dijk, and Erickson when the women's Semis kick off. Tune in Tuesday at 7:30 a.m. for Dawn Patrol and the next call.