Joan Duru is a 27-year-old Frenchman in his sixth full-time year on the Qualifying Series (QS). It's been a long and arduous haul for the veteran, but he's risen to 4th on the QS rankings, which means he's poised to join the elite in 2017. "He's one of the best all-around surfers on the planet," says Volcom International Team Manager Matt "Bemmy" Bemrose, himself a former top-flight professional surfer. "He is a power house on the QS, knocking at the qualification door as we speak. I believe Joan will excel on the Championship Tour with his well-rounded surfing and strengths in waves of consequence."

For many close watchers of professional surfing, Duru's ascension is both long overdue and important for the sport in Europe. After Mikey Picon, Aritz Aranburu and Tiago Pires dropped off tour, it left Jeremy Flores as the sole remaining member of what was once called the Euroforce. Duru's familiar with competing in front of large European crowds, like those at the Lacanau Pro. - WSL / Laurent Masurel

For most of this decade, many pundits have claimed Duru to be the continent's best male surfer and the man most likely to join Flores (Johanne Defay is the sole French surfer on the women's tour). His grounding in the French beachbreaks, he grew up in Ondres about 10 miles south of Hossegor, but now lives in Capbreton. He's developed the all-around ability to which Bemrose alluded, and he'll likely adapt to the CT quicker than most.

That well-rounded ability is evident in his best results on tour this year. A seventh at the Volcom Pro at Pipeline was backed by a final in the small beachbreak rights of Ballito and a win in the closeout lefts of Lacanau. He is comfortable both backside and frontside in heavy water tubes, loves small beachbreaks and can do massive airs. Duru is truly a complete surfer. Duru and his girlfriend Maud Le Car are quite the power couple in the French surf scene. - WSL / Laurent Masurel

However, despite the obvious talent, Duru hasn't always been able to string together competitive results to reach his dream. 2014 was his best year so far, where a strong start was negated by a poor last three months leading him to finish 20th, just a few places from making the cut.

Surf Europe Editor Paul Evans once described Duru as "Quietly confident and confidently quiet, but sometimes he has struggled to fit the jigsaw pieces of his life -- his surfing, his friends, his family and the fun into some type of balanced order to reach the holy grail, Championship Tour qualification." Duru's runner-up finish at the Ballito Pro gave him a massive boost up the QS rankings. - WSL / Kelly Cestari

This year though, Duru seems to have found that balance. He's been training as hard as he has in his career, and is both happy and settled traveling with his long-term partner and fellow CT aspirant Maud Le Car. He has also dialed in his equipment, the Mayhems shaped by Matt Biolos providing the ideal counterpoint to his powerful and highly technical surfing.

After his win at the 1500 QS Medoc Ocean Pro Lacanau Pro, Duru said, "This win is great to keep my confidence levels up as we're going into the next few events and the end of the year. I really wanted to surf some good heats, keep training and keep posting big scores. I love surfing no matter how many points are on the line, but now it's about building on what has been a good year." 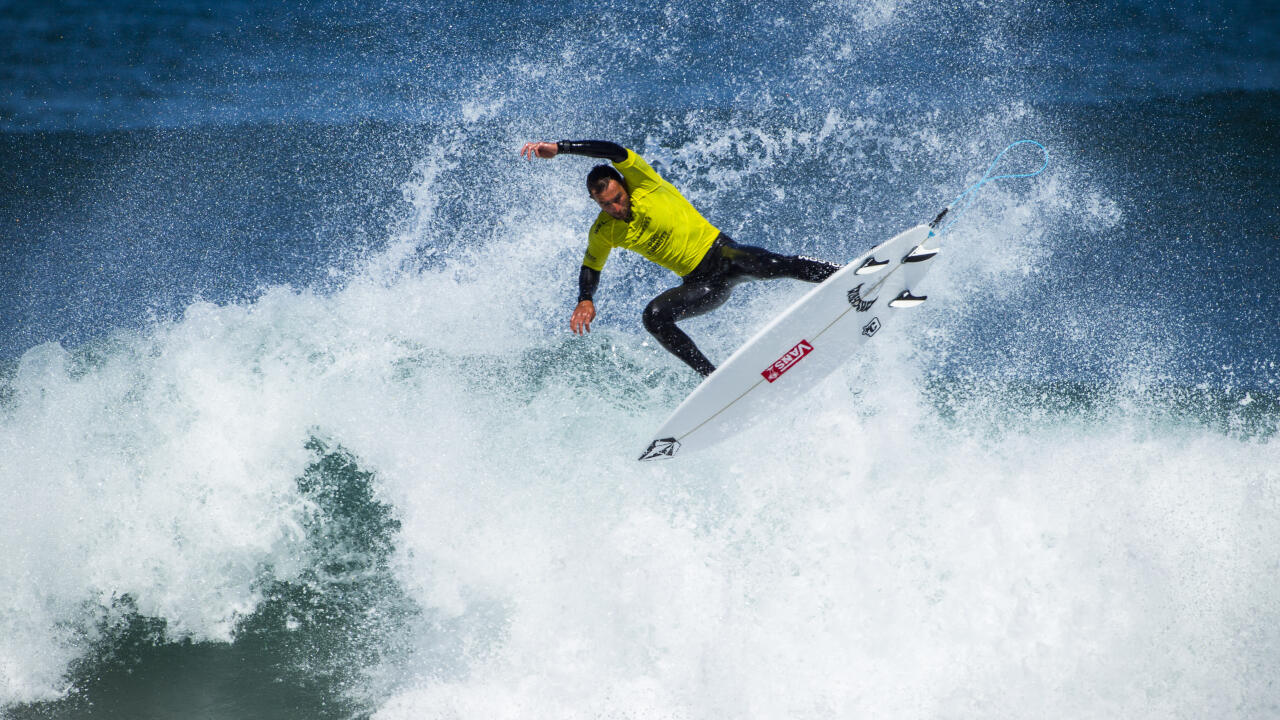 Duru's surfing is grounded in the fundamentals, but his air game is intact. - WSL / Damien Poullenot

With the three 10,000 QS events remaining to run at Cascais, Haleiwa and Sunset, venues that perfectly suit Duru's lethal backhand, it looks like the Frenchman's incredible hard work in 2016 will finally see him reach his Holy Grail. If he does make it, there is perhaps no surfer on the QS right now who will be better suited to it.