A runner-up at the Vans US Open and Quarterfinal at the Ballito Pro 10,000 events were no where near as sweet as Ethan Ewing's first QS3,000 event win at the Essential Costa Rica Open Pro - WSL / Johan Pacheco

Ethan Ewing has been on our radar at every capacity in 2016 -- and now once more with his first substantial Qualifying Series win at the Essential Costa Rica Open Pro QS3,000. This particular chair-up held much bigger meaning in the top QS picture as he now sits at No. 4 heading into the final stretch of 2016.

The 18-year-old Australian came out with a spectacular performance on Finals Day -- posting a near-perfect 9.27 with ferocious backhand hits to the critical sections of the wave to begin the Final against an in-form Olamana Eleogram. Eleogram did his best to fight back with a vicious backhand attack of his own to match Ewing's, but when the horn sounded, it was the 18-year-old Australian who earned the honorary chair up the beach.

"I'm still tripping right now, it doesn't feel real at all to me," Ewing said. "It was amazing for that first wave to just come straight to me and it was probably one of the best ones of my life so far. It feels amazing to earn 3,000 points and actually win a contest at a bigger QS is great. I feel like I'm getting used to the competitive scene on the QS and all my big results haven't even come from wins, they've just been runner-ups and Quarterfinals. To win a contest and have my friends carry me up the beach, is just indescribable." 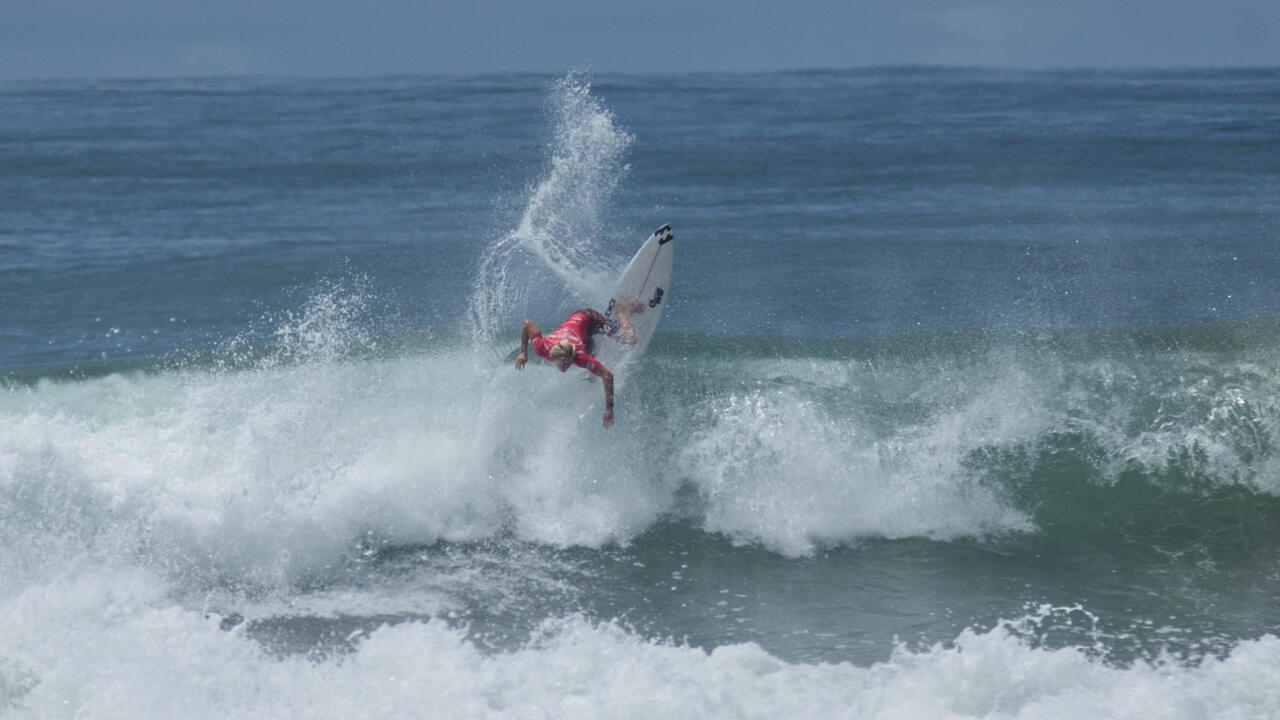 Ewing had to overcome a heavyweight bout in the Semifinals against Costa Rican Noe Mar McGonagle and began that heat with another near-perfect 9.00 on his backhand after taking down Frederico Morais in the Quarterfinals. McGonagle fought back with his backhand and forehand attacks on separate occasions, but couldn't earn the 7.01 needed to top Ewing for a shot at the Final.

"There were a lot of really good guys here, that was just a stacked event and surfing against Noe Mar [McGonagle] in his home country was incredible," Ewing continued. "I've just been trying to focus on that so much here and I feel it's really helped me. Getting second there's that bit of emptiness like I left something out there so to come away with a win." Runner-up Eleogram proved his event standout status in defining fashion with technical surfing throughout the final day of competition. The Hawaiin took down the high-flying Jorgann Couzinet with a massive 8.83, performing risky maneuvers in heavy closeout sections once again. The Maui-native then dispatched an in-form Timothee Bisso in the Semifinals with more clutch surfing when he needed it most -- posting an 8.00 in need of a 6.17.

But, the Aussie phenom proved too much for Eleogram's electric surfing and the Maui-native will head back to the islands with 2,250 points.

"It feels really good since I haven't done a lot of events this year, just some Aussie ones which didn't really suit me unlike this wave here," Eleogram said. "I definitely didn't imagine myself making the Finals and once I did I really wanted to win, but Ethan [Ewing] was ripping. It was great to get the right waves and stoked on my surfing. It's my first Final in a few years so it feels like I still got it a bit after that one and just the waves feeling so much like home really sparked everything." 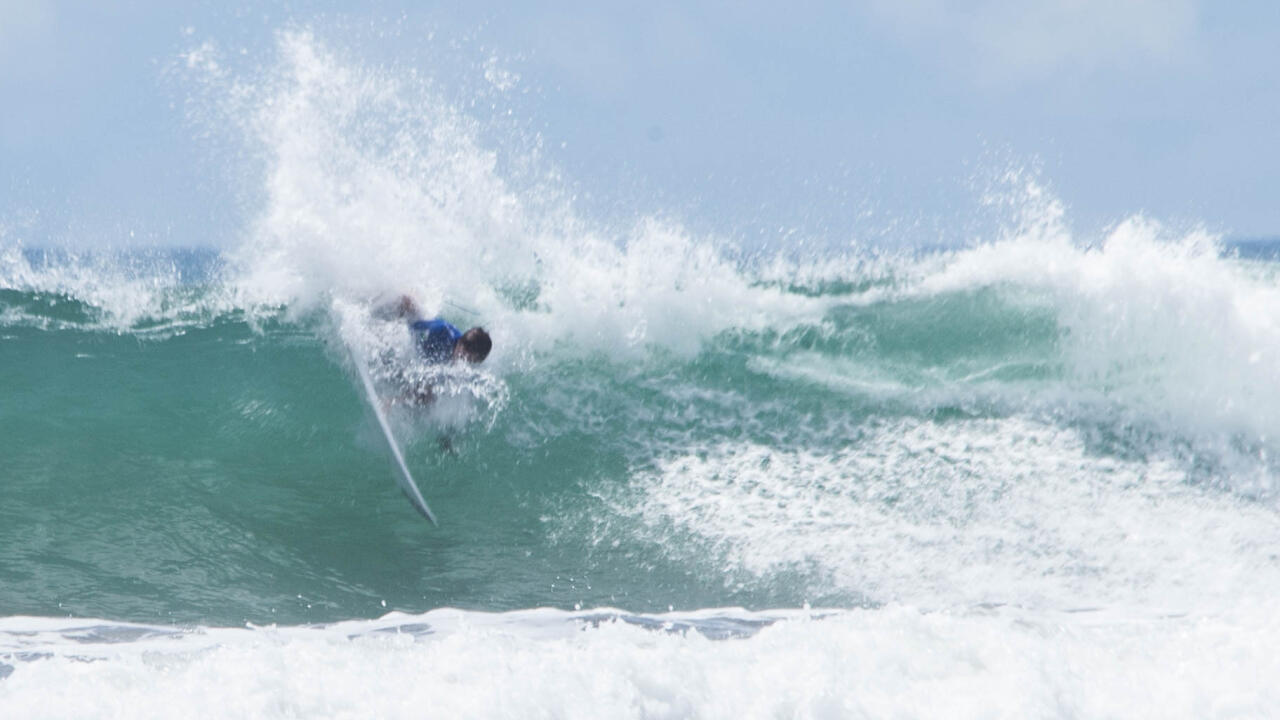 Eleogram's risky approach to big closeout sections provided him excellent numbers throughout this event and will now head back to his other job, as founder of, Olamana Organics farming in Maui. - WSL / Johan Pacheco

Guadalupe's Bisso may not be having the year he wants, but the 2016 World Junior Championships runner-up still sits at No. 41 on the WQS with his Semifinals appearance. Eleogram's late heat heroics extinguished the flame of Bisso's prolific Costa Rica campaign, but the young gun still has a lot to learn on the QS.

"This year hasn't gone my way, but it's a learning process and I'm enjoying my first year on the QS full-time," Bisso said. "I had a lot of fun at this event, the waves were so good and I felt confident making it through a lot of heats until that Semifinal. I'm still learning to tune out all of the distractions since a lot of crowds on the beach watching is something I'm still not used to, but it will come in time. Hopefully I can find my way into the Triple Crown and really have a good run to close out my year." Bisso's best result came in Martinique with an Equal 13th but can now boast a Semifinal appearance for the first time. - WSL / Johan Pacheco

Fellow Semifinalist who fell victim to the raw power surfing of Ewing was the lone Costa Rican remaining in the event, Noe Mar McGonagle. McGonagle eliminated Jordy Collins in the opening Quarterfinal bout, but could not match Ewing blow-for-blow and lacked a 7.01 when the final buzzer sounded. McGonagle's ambitions were not dashed however, and will look for a big bounce back.

"It was unfortunate to have miscommunication with the beach marshall and believing it was a thirty-minute Semifinal heat, but overall I'm stoked with the event," McGonagle said. "It is what is and now it's time to get ready for the next one. I think I need to make a final in Brazil now, a Semifinal won't do it for me. It's definitely disappointing. Brazil may be my last year of the year so I'll go in to that one with everything I've got, work hard starting now until then, and get ready for the smaller wave grind. Hopefully I can pull it off." 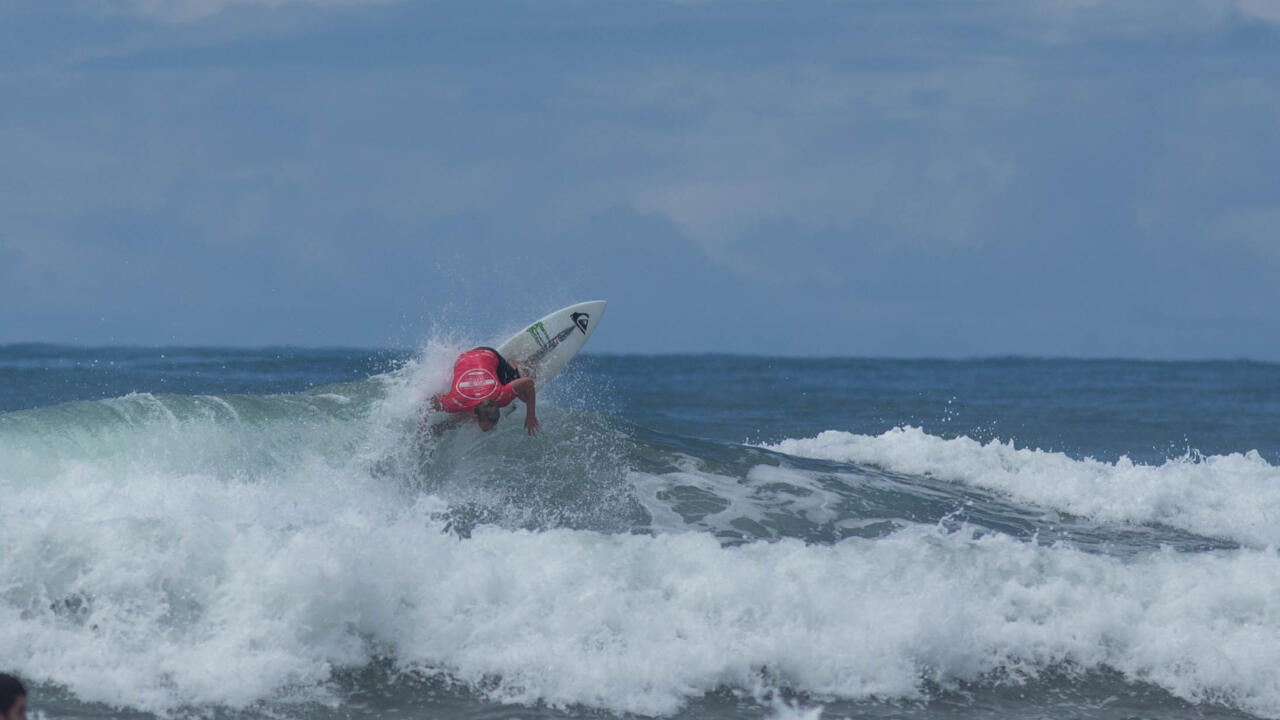 McGonagle had the entire beach cheering after each maneuver as he fought to keep the QS title, won 14 years ago by fellow Tico Magnum Martinez, in Costa Rica. - WSL / Johan Pacheco