After becoming the first South American surfer to clinch the WSL World Title in 2004, Sofia Mulanovich (PER) capped off another historic performance on Sunday by defeating Leilane McGonagle (CRI) to win the QS 1500 Maui and Sons Pichilemu Women's Pro in Punta de Lobos, Chile. 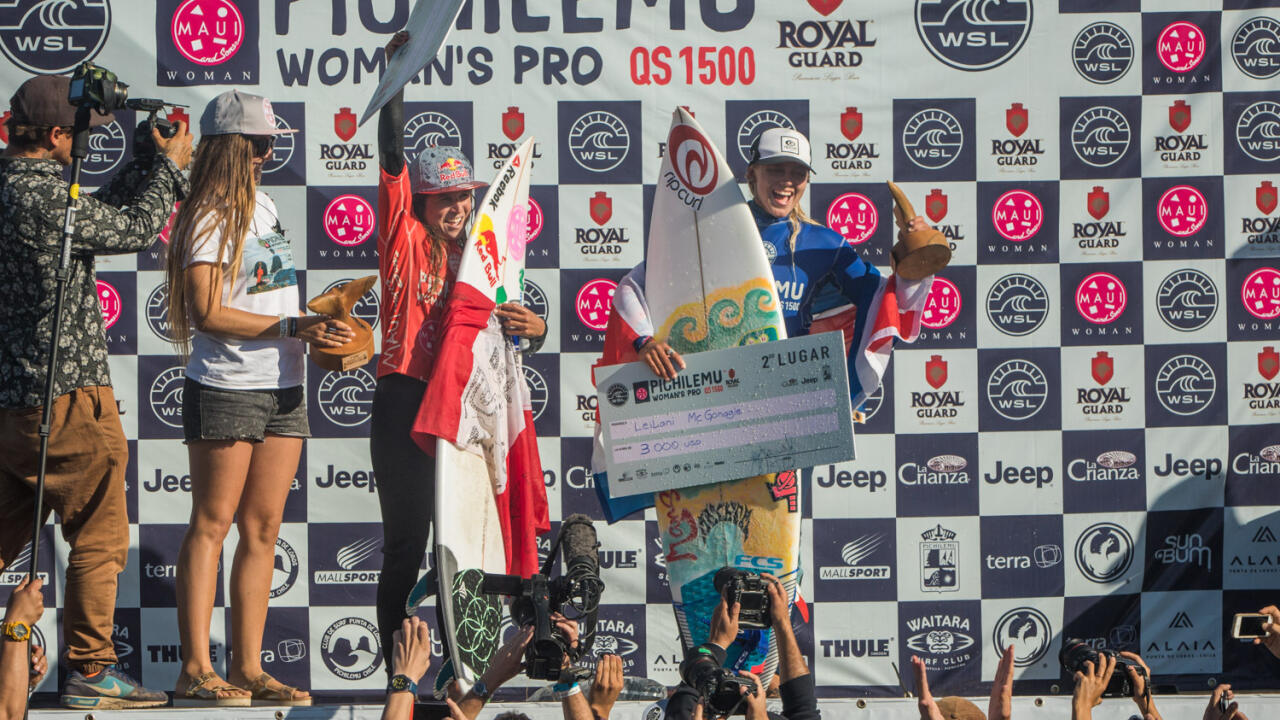 Throughout the event, the waves at the lefthand pointbreak suited Mulanovich's powerful backhand surfing to a tee. The savvy veteran bashed the line-up and put up high scores heat after heat. In the Final, the experienced competitor proved too much for McGonagle as the Peruvian beat the 16 year-old up-and-comer from Costa Rica by a score of 15.54 to 12.83.

"Well first of all, I'd like to thank everybody that came out to support women's surfing and a big thank you to all of the local surfers that gave us the opportunity to compete here during all these days," said Sofia Mulanovich during her speech on the winner's podium of the Maui and Sons Pichilemu Pro. "The waves here in Punta de Lobos are incredible, it's my favorite contest in the world and thank you to all the fans, Trinidad Segura (Event Organizer) and all of the sponsors. I'm super happy and thank you to everyone," Mulanovich concluded. After spending years on the WSL Championship Tour, the 33 year-old from Peru showed that wave selection was crucial in the 2-3 foot waves at Punta de Lobos. Mulanovich increased her point total after each scoring ride and topped it off with a high-score of an 8.67 and backed it up with a 6.87. McGonagle fought hard on her forehand, but came up short after obtaining a 5.93 and a 6.90 for a runner-up finish.

"Wow, I just want to thank everyone for being here and supporting us," said McGonagle after earning her best result on the WSL Qualifying Series. "It was so much fun to surf with all of the girls these last few days. Thank you to all of the staff for running such an incredible event. I'd also like to thank Sofia (Mulanovich) who surfed so well throughout the event and a special thanks to my father who is watching everything closely from Costa Rica. I love you Dad and thanks for all the support, I'm very happy," declared McGonagle. In addition to the main event in Pichilemu, an adjacent underlying narrative developed as the results from each heat played a role in determining who would become the 2016 WSL South America Champion.

Silvana Lima (BRA) held the top spot on the WSL South America rankings after her victory at the Praia do Forte Pro in Bahia, Brazil, but did not make the trip to Chile and would relinquish her position in the race for the title. The outcome was still up for grabs as several athletes were eligible to end up as the continental champion. "Thank you so much to all the people that made this event possible and to all of my friends that cheered me on and kept up the good vibes," stated the newly crowned 2016 WSL South America Champion. "I also want to thank all of the competitors that did such a good job. I'm so stoked and thank you to all of the people from Chile that welcomed us with open arms. This trophy is so big, I don't know how I'm going to be able to carry it home," joked the 26 year-old Brazilian. By clinching the title, Martins will now be eligible to compete in every major Qualifying Series event in 2017.

The QS 1500 Maui and Sons Pichilemu Woman's Pro was sanctioned by the WSL South America as the 31st of 32 WSL Qualifying Series events.